Academy Awards, 1995 Golden Globe Awards, 1995 MTVMovie Awards, 1995 People? s Choice Awards, 2005 American Film Institute Awards andvarious other ones. It was an adaption of a novel of the same name, by Winston Groom. Robert Zemeckis was the director of the movie, and he made great decisions about thecamera techniques to be used in each scene. In 1996, a restaurant with the name? Bubba Gump? was open in honour of the movie, and surprisingly there is one in thePeak Galleria in Hong Kong! The opening scene of the movie is filmed very beautifully, especially with thefeather floating in the air, because it creates the mood of the whole piece.

Don't use plagiarized sources. Get your custom essay on
“ Forrest Gump by Eric Roth ”
Get custom paper
NEW! smart matching with writer

Also, themusic and sounds chosen to accompany the opening scene, contributes to the tone of the entire movie. From right the beginning of the film, the feather is already floating around in theair. This white feather is a symbolic object that counts as a sign. The whiteness of itseems to show the purity and innocence Forrest has, and his enthusiastic personality,where he is determined to do whatever it takes to fulfill his own, and his friends andfamilies? dreams.

It also seem to symbolize the famous quote that his mom always said,? Life is like a box of chocolates. You never know what you? e gonna get.? With thefeather floating to random places, e. g. on top of cars, on people? s shoulders, on thefloor? It shows how random life can be, and how no one ever knows what lies in theirpath of life, what obstacles they will have to overcome, and what their destiny is.

With the words and the townbackground, the feather interestingly, is still the focal point of the whole shot, andunintentionally, your eyes follow wherever it is going even when the background ischanged drastically. When the feather is shot in the sky, it is from a low angle, which shows theimportance of it as a sign, so it feels as if the feather is superior to the audience, whoare inferior in this point of the film. There are also several shots of the feather floatingabove the forest with lots of greenery; the colours really contrast, with the white on thegreen, which also helps draw the audience? attention to the tiny white feather in theforeground.

The two minutes with the feather as the focal point of the shots are shotfrom different distances and various techniques. Sometimes, the feather is close up, andcomparing it with the size of the buildings in the background, it almost seems bigger. During the whole process of introducing the feather and the symbolism behind it, thecamera technique used is track, because the camera just follows wherever the feathergoes. When the feather lands on a man? s shoulder and on the car, a medium shot isused, and its shot from a high angle.

Normally, it is when a low angle is used that the audience feels inferior, but in this situation, the feather still seems somewhat superior,and looking down at it, feels like the audience is looking at the whole theory of life usinga different point of view. With various examples of the feather landing on differentplaces, it shows how many unexpected things could happen in life, and no one knowswhat their destiny will be. After floating for a long time in the wind, the feather finally ends up on theground next to Forrest Gump’s shoe and stops moving.

A close up of the shoe along withthe feather is taken, which emphasizes once again, the importance of the feather, andthe shoe as well. So far, the camera technique used is still tracking. The shoe is also asign because it shows how Forrest has managed to overcome many obstaclesthroughout life, to be in the position he is now. The shoe is significant, because as achild, Forrest had a problem with his spine, so he couldn? t walk properly.

He starts running and breaks his leg braces, and through all thepain and suffering, manages to start running, and learns that his legs are functional. Soespecially since his shoes are dirty in the shot, it portrays that he has worked very hardand overcame many obstacles wearing those shoes. Also, Forrest states that his motheralways says ? Shoes can tell a lot about a person. Where they go. Where they havebeen.? The close up continues on when Forrest picks up the feather with his hand, andduring that instance, a tilt is used where the audience looks at Forrest from his feet upto his head.

This is a great way to introduce the character. Whilst Forrest examining thefeather, the audience sees just the top half of his body, which means that a mediumshot was used. It is effective to use a medium shot for this part of the film, because theaudience should really focus on the facial expression on Forrest? s face to see what hefeels about the feather. The medium shot continues to be in use when Forrest placesthe feather in his suitcase. A track is used to show Forrest using a medium shot once again afterwards, toshow him staring into the difference, this quickly cuts into a long shot of him still lookinginto the distance.

A sense of mystery is created because the audience members want tofind out what is so interesting that he keeps on staring at. Then, a bus comes along andblocks the view of Forrest, and the connection between the audience and Forrest isbroken. The camera remains still until the woman who comes off the bus sits on thebench next to Forrest. A zoom is used here, which is quite effective, because essentially,the audience really wants to know what will happen between Forrest and this woman. Most likely, they will begin chatting, which is why there is a zoom used to basically seewhat will happen.

After a bit of chatting between the two, the camera quickly zoomsinto a close up of Forrest? s face. This is a very important and beneficial shot, because itgradually slips into the next scene here. Where Forrest starts squinting his eyes? Overall, a variety of camera movements, angles and distances are used in theopening scene of the well ? known film Forrest Gump. The main sign is the feather,which is in nearly the whole of the opening scene. The significance of it is shown withthe comparison to Forrest? s mothers? theory of life. 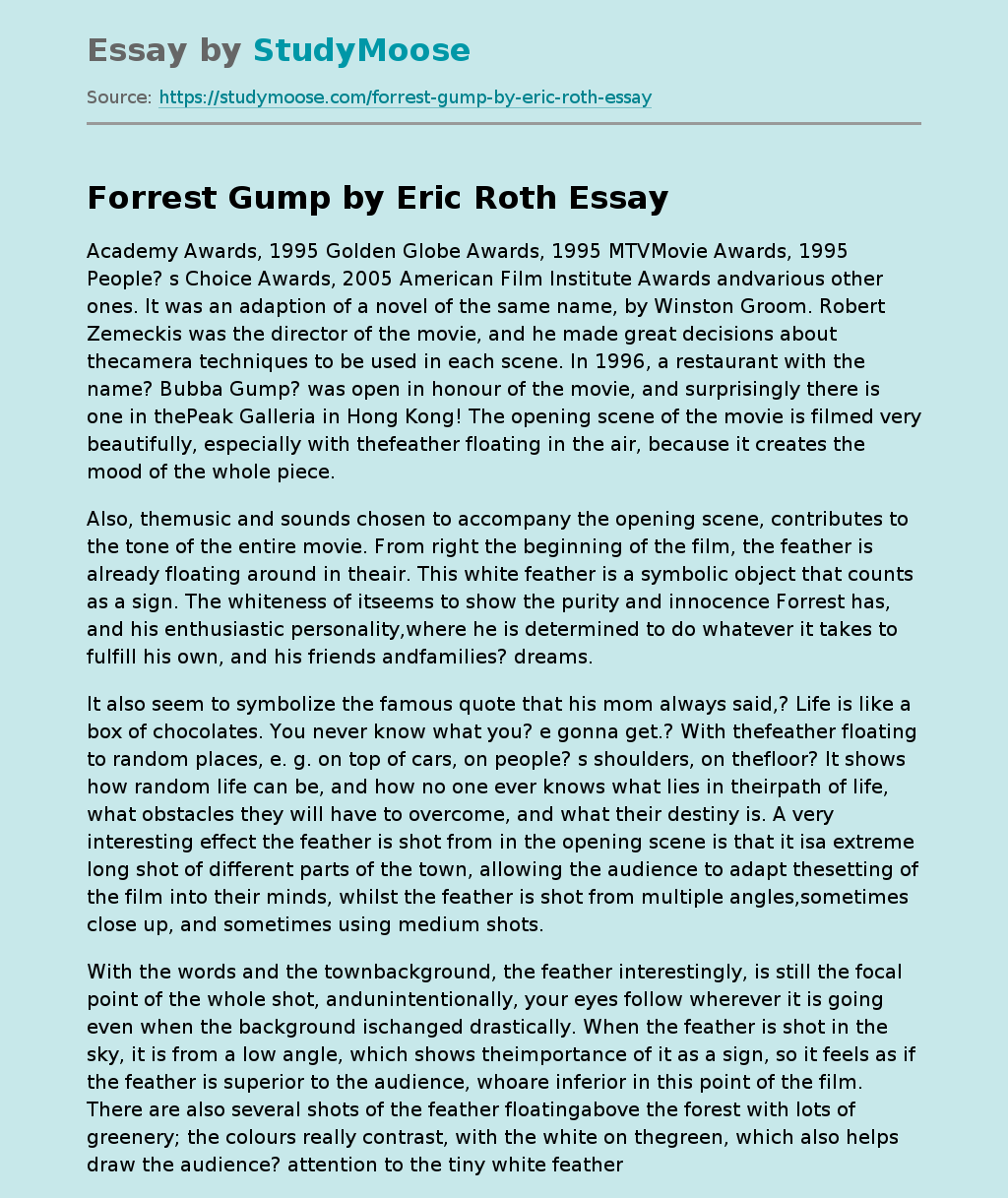