A work of art usually consists of various techniques which the artist uses to express himself/herself. He /she uses a mixture of artistic elements and combine them to come up with admirable paintings and drawings. These elements include lines, color, patterns, balance and light among others.

Don't use plagiarized sources. Get your custom essay on
“ Analysis of Art ”
Get custom paper
NEW! smart matching with writer

The artist has used curved lines to bring out the claws of the bird in the picture. The post is straight and the buildings have been drawn using patterns of straight lines.

The artist has also utilized light whereby some part of the bird is very bright while another part is slightly dark to create an impression of a shadow caused by the bird un the drawing.

The tarmac road is also very illuminated and this shows that it is daytime. The light causes the visual appearance to be enhanced.

The dominant color used to paint the bird is chocolate. This is a bold color and brings out the bold element of the bird. Other colors in the background have also been created, for example the grass lawn is green in color and this brings life to the artwork.

The buildings have been painted using a pattern of colors such as white and bright gold which create an atmosphere of ability.

There is mixing of colors such as red, blue and green to bring a balanced atmosphere. The color of the bird is same to the color of the object on which it rests on, implying that it is a drawing.

This work of art has a rough texture. The way the bird has spread its claws and the appearance of the rock on which the bird is resting on display roughness. This is used to suggest the nature of the bird, being a predator; the eagle is rough on its prey.

There are various shapes exhibited in this photo. There are cylindrical beams in front of the drawing. The bird has also been drawn in a way to portray a streamline shape moreover the house nearby to the bird has some rectangular patterns which make it to have a nice appeal on the outside.

There is a road nearby and it has a curved shape on one end implying it has a bend in order to change direction. The bird is leaning against a triangular object. The drawing is lying on a flat level ground too. The shapes on this figure are strung and they display boldness.

The artist of this drawing has used a mixture of geometric form and organic form. There is excellent geometrical excellence. Such as the triangular object in which the bird rests, the buildings and roads which are architecturally wonderful. The author has also used organic structure where he has included trees and a grass lawn to bring in the natural beauty of a natural environment.

The drawing displays an excellent way of utilizing space. The artist is able to balance various structures from the space available and makes provision for buildings, trees and a road which are all important for human survival. The space is our size and shows a pleasant atmosphere brought about by the artistic work.

The artist brings up an idea of time and motion in this drawing. A car is driving away from the house implying the owner of the car is in motion. The bird has also stretched out its feathers to fly meaning it is daytime. Correlation of daytime and motion is that most activities by human beings and birds are done at night.

The artist created an impression of value in the picture by using objects which are considered to be valuable. For example, in most societies ownership of a car and a house is considered prestigious and these two are thought to be valuable assets. It is believed that people who own vehicles beautiful vehicles and nice buildings are wealthy.

The author has made the emphasis to be on the bird. He has first taken its picture from a distance where the background is visible and beautiful. He has again thrown the bird at a close range, bringing our focus to the bird by the use of repetition.

There are patterns which are repeated and this creates an emphasis on the shape and draws our eyes to these rectangular shapes. There is an impression created when the artist uses two grass lawns in the picture. They serve to create emphasis. The bird is placed on the foreground purposely to draw attention and to create a focus on it.

In this drawing, balance is established. They are various shapes which are drawn and different colors which are used to break monotony. The allocation of space is balanced such that there is a good enough space for the buildings, the road, pavement and the bird drawing.

The artwork has used a mixture of shapes and objects. It has also used various types of colors to bring out an excellent piecework. The shapes, use of lines and colors chosen make the artwork to stand out.

There are certain patterns used in this drawing. One is a color pattern where the color of the bad resembles the color of the object on which it lies. There is also a repeated pattern in the house with rectangular patterns on the outside. 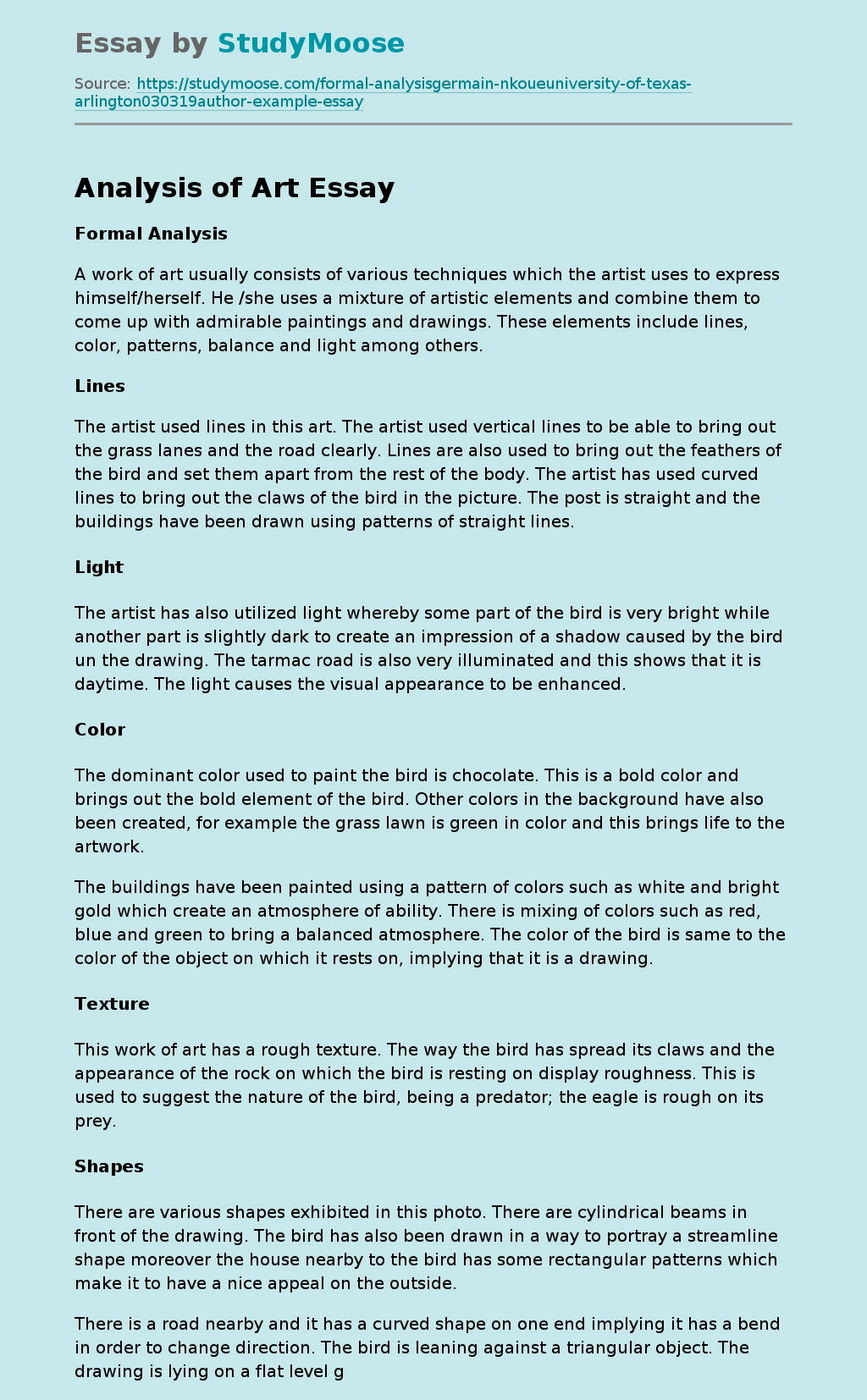