Get a verified writer to help you with Forgive my Guilt

The speaker in this poem is the author. The author is talking about his summer when he was younger. He uses simile in the quote “They cried out like two sorrowful high flutes” meaning that the two birds cried sound like an out of tune flute that sounds horrible. He uses imagery because it helps me picture that two birds have been injured, by telling us that he had a pellet gun and shot the poor birds.

The poem starts by saying “Not always sure what things called sins may be, I am sure of one sin I have done It was years ago, and I was a boy.

In this sentence the author is admitting that he have done a sin when he was younger. A sin is when you have done the wrong action, a regrettable action. It continues to say “I lay in the frostflowers with a gun” he is started to say that he was lying on the ground filled with frostflowers.

Then it says “Ran like quicksilver on the golden sand” when he said this he meant that he was running on the beach. Then it says “My gun went off, they ran with broken wings” he said that he fired his gun and shot a bird and that bird was trying to fly with a broken wing. Then it continues to says “Into the sea, I ran to fetch them in, But they swam with their heads high out to sea,” he said that he knew that he shot a bird so he ran towards to see if the birds were fine but the birds swam away toward the sea.

Then it continues to say “They cried like two sorrowful high flutes, with jagged ivory bones where wings should be” when he said that “they cried like sorrowful high flute” he meant that their cries sounded like an out of tune flute, which sounds horrible and then when it says “with jagged ivory bones where wings should be” he is telling us since he shot the birds, he left the birds wounds. Then it continues to say “For days I heard them when I walked that headland Crying out to their kind in the blue” he tells us that he went back to see the birds and saw that the birds were telling something to their herd.

Headland is when your near a fence or border. Then it says “The other plovers were going over south on silver wings leaving these broken two” he said that the plovers sadly left the two birds and headed south without them. Then it says “The cries went out one day but I still hear them Over all the sound of sorrow in war or peace I ever heard, time cannot drown them. ” He said that the cries of the birds followed him everywhere he goes not matter what he was doing he still heard their cries. Then it ends by saying “Those slender flutes of sorrow never cease.

Two airy things forever denied the air! I never knew how their lives at last were split, But I have hoped for years all that is wild, Airy, and beautiful will forgive my guilt. ” The author is telling us that the cries never stopped, he has heard their cries for many years, he is saying that he is sorry for the sin he has done and finally apologize for the guilt he has committed when he was younger. The poem is telling us to think before we commit something because you never know that the actions you decide might haunt you forever.

Get a verified writer to help you with Forgive my Guilt 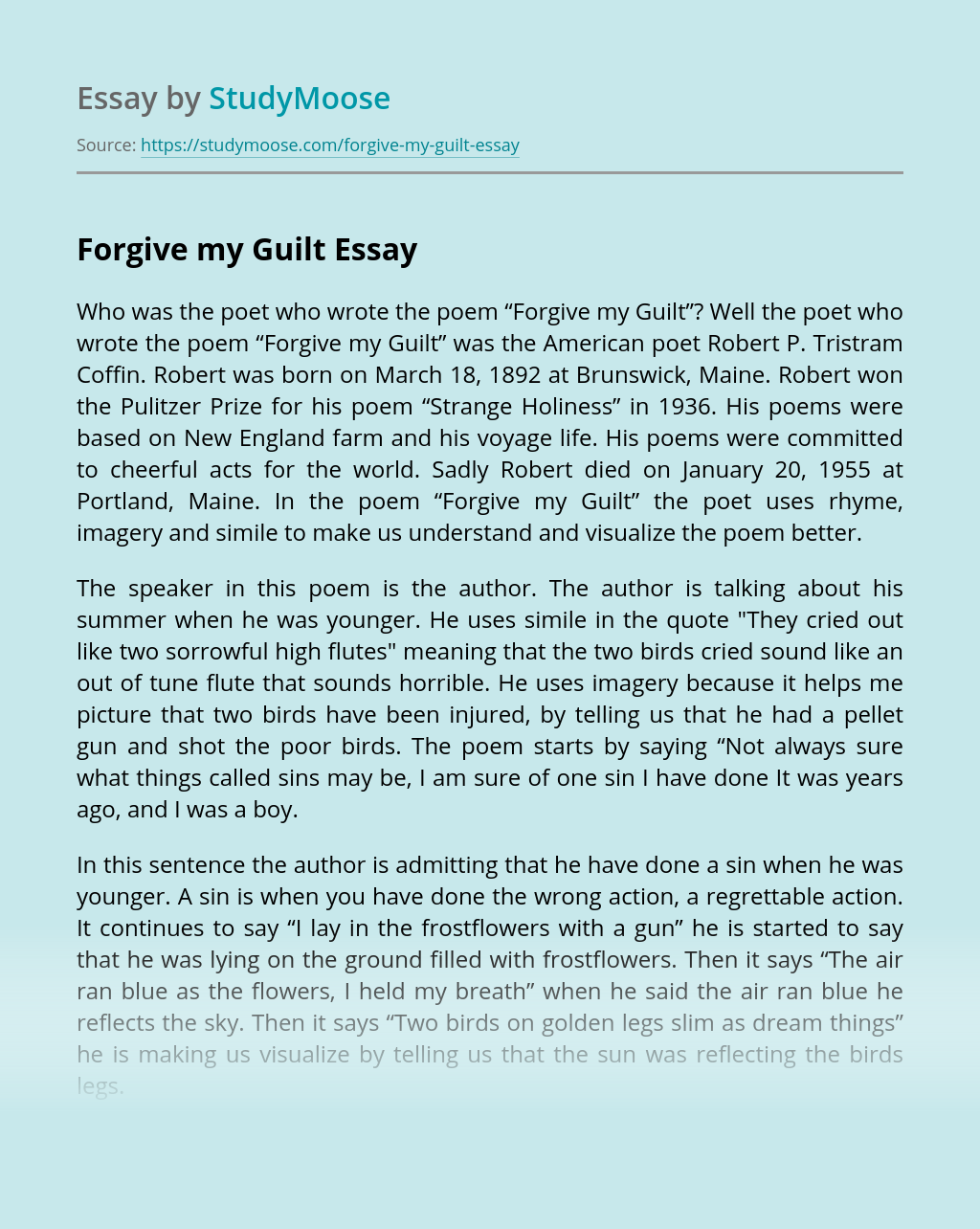 Born in Kirkwood, Missouri, Moore studied biology at Bryn Mawr College. After travelling in Europe with her mother, she taught at the U.S. Indian School in Carlisle, Pennsylvania, and later moved to Brooklyn, New York, where she worked as a librarian. Moore first published her poems in such little magazines as the Egoist, Poetry, and...

“Sparrow” by Norman MacCaig has a strong social issue of the class system and how the classes differ. MacCaig talks about the concern of the class system in relation to survival of to fittest. The poem itself speaks about birds like sparrows and other birds in basic, which are metaphors for individuals. Word choice, sentence...

Get Essay
Brief Analysis of a Poem Anahorish

A poem from Wintering out (1972) still early days in the “troubles” Anahorish is a place in south Derry, just a few kilometres south of Heaneys family farm. In gaelic it translates roughly to “hill of spring water” My “place of clear water,” The first hill in the world. This suggests that, literally Anahorish was...

Ode to the west wind - questions and answers

What is the tone of Stanza I? Explain. Stanza I has a tone of calm and sensuality created in it. The poet is only depicting the real image he sees in front of him, explain the monotony of an Autumn Day “conversing” with the Wind. There are no feelings involved in the depiction of the...

Analysis of the Poem: The Darkling Thrush

Speaker: The speaker in the first two stanzas is portrayed as pessimistic and dark, but this changed in the two last stanzas. In any case, the speaker is conveyed to have strong feelings for nature. Form: Rhyming scheme is clearly visible giving to poem a rhythm. The 3rd stanza’s rhyming scheme seems to have been...

"Hurricane Hits England" By Grace Nichols and "Storm on the Island"

“Hurricane Hits England” about a hurricane that came across from the Caribbean and hit the South coast of England (Sussex). In 1987 the poem takes place at night and follows the poet, Grace Nichols, as she talks and questions the hurricane like it were an old friend. “Storm on the lsland” is set on the...

The beauty of nature is so intense it can be overwhelming