Foreshadowing and irony in “Story of an Hour”

Throughout the story “Story of an Hour” there are a few subtle instances of foreshadowing and irony. These instances explain the some of the scenes throughout the story. The opening sentence foreshadows Mrs. Mallard’s death at the end of the story as it explains how serious Mrs. Mallard’s heart trouble really was, as great care was taken to break the news of her husband’s death.

The irony that is of Mrs. Mallard’s death upon finding out her husband did not die in the train wreck, and when she sees him the shock kills her.

Turn in your highest-quality paper
Get a qualified writer to help you with
“ Foreshadowing and irony in “Story of an Hour” ”
Get high-quality paper
NEW! AI matching with writer

Richards was so careful to break the news of Mr. Mallard’s death it’s ironic that Mrs. Mallard ended up dieing when she learned he was still alive and not of his supposed tragic death.

The detail where “her bosom rose and fell tumultuously” is more than just a feeling. That sentence leads the reader to a better understanding of why Mrs.

Mallard’s died so suddenly after she sets her eyes on her husband. The line explains how Mrs. Mallard is becoming more and more agitated with overwhelming feelings of sadness for her husband but at the same time freedom for herself. This, getting her troubled heart going, she feels the possibility of death approaching and tries to fight back with her will.

The Mood inside the her room is confusion, as Mrs. Mallard is both upset of the death of her husband but at the same time excited with the possibilities of being a widow finally being able to gain some control over her life.

As Mrs. Mallard looks out the window she sees the tree tops, blue skies she hears the birds singing and the noise of the street below. All of these things open her eyes to the freedom her husband’s death has giver her. The confusion inside disappears as she looks out the window into a potentially happy life awaiting her.

Richness is added to the story by all the hints, clues and suggestions show how Mrs. Mallard spends an hour of rollercoaster emotions from sadness, happiness, freedom, relief and finally shock. Which in the end takes her life after feeling the highs and lows of her emotions in such a short period of time, her troubled heart just can’t take it.

Foreshadowing and irony in “Story of an Hour”. (2016, Sep 13). Retrieved from https://studymoose.com/foreshadowing-and-irony-in-story-of-an-hour-essay 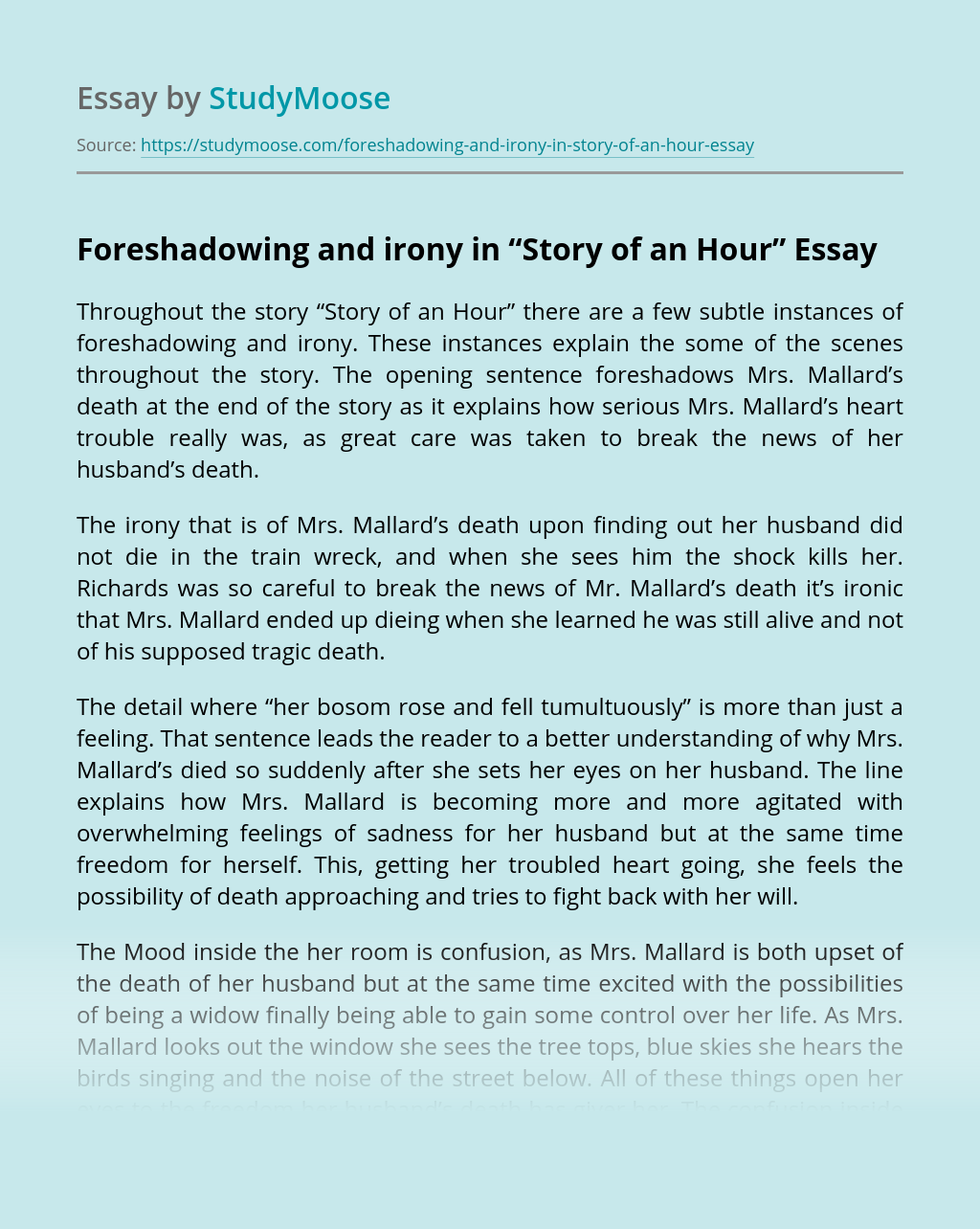 Turn in your highest-quality paper
Get a qualified writer to help you with
“ Foreshadowing and irony in “Story of an Hour” ”
Get high-quality paper
Helping students since 2015
Stay Safe, Stay Original