1. What is liver mortis? How might this reveal information about the time of death? Liver mortis is one sign of death that occurs when blood settles in the lower parts of the body. The part where the blood accumaltes can be discolored or turn a purple color after a certain time and reaches its limit at 8-12 hours after death and can help investigators reveal info about time of death. 2. What three aspects does a forensic autopsy seek information about? Describe each of these aspects? They seek information about the cause of death, mechanism of death, and manner of death.

Don't use plagiarized sources.
Get Your Custom Essay on Forensics Text Questions Just from $13,9/Page

The cause of death is the medical reason that caused or led to the death. The mechanism of death refrences to a tool or mechanism used to cause the death. The manner of death has to do with if the death had to do with murder or suicide, not natural causes of death. 3. How can digestion rates give information to forensic scientists about the time of death? Digestion stops whenever somone dies so that means investigators can look at how far along a food eaten by the viticm is along in the digestion process.

Mummification is the drying of tissues and bones.
5. How can human bones give forensic scientists an indication of age? Describe some of the aspects that would give this information. Investigators can get some indication of the bones size by looking at the length of the bones or how much wear the bones have. If the bones are smaller then this could indicate that it was a child. If the borns have arthritis or wear in the joints, this can help them iindicate that it was an older person or adult.

1. Imagine that you are at a crime scene. You find skeletal remains, but the skeleton is not complete as some of the smaller bones are missing. The bones are within a twenty feet radius. Based on this information, what would you be able to ascertain about the time of death and the individual who was killed? Investigators could indicate how long it has been since time of death by the location of the bones. The time of death would probably be around a year if the bones are 20 feet apart and smaller bones are missing. The missing bones could have been carried away by animals or insects. 2. Out of the different methods to help determine the time of death, which one do you think is most effective? Why? I think algor mortis is effective becuase the body starts to cool down after death. If a body is cold or at room temperature, investigators can indicate that the victim has been dead for awhile whereas if the body is warm they can indicate the time of death has been not too long.

3. Do you think you would like to participate in an autopsy? Why or why not? I would like to participate in an autposy because I would be interested in seeing how the death affected the boody. It would be interesting the inspect a body and try to figure out the actual cause of death instead of what was said about the cause of death.. It’s like you be able to have the facts instead of just what was heard. 4. If you were a forensic anthropologist and were studying human remains, what information would you look for in the bones? Why would this information be helpful? I would look for the location of the bones to figuer an estimate of time of death. I would also look at bone lengths to figure out the age or sometimes gender. I would also look at the wear of the bones and wear around the joints to get an estimate of the age of the victim. I would also look for any arking to see if they had a disease that could have caused the death. I would also look for any fractures or injury in the bones to figure the cause of death.

5. What can the distribution of bones tell a forensic scientist? What do you think would be the most challenging aspect of collecting skeletal remains at a crime scene? The distribution of the bones can help investigators get an estimate of the time of death. If the bones are not atached and spread out, then the time of death is longer then if they were attached. I think the most challenging aspect in collecting skeletal remains would be figuring out the age oof the victim. There are only few methods in figuring oout the age and it wouldn’t be that precise either, just a guess of around an age. 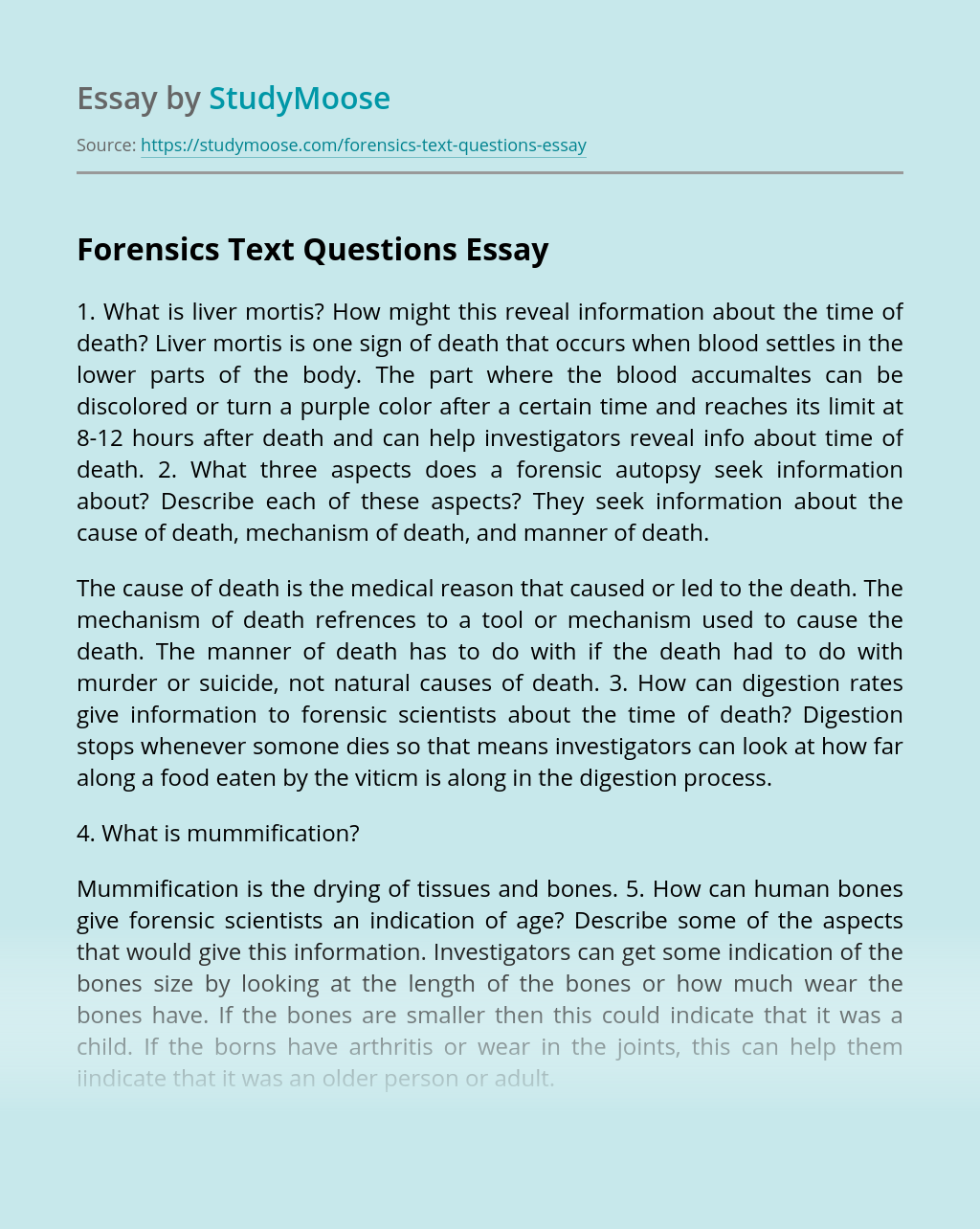 Death of a naturalist

In the poems presented, the main theme of parent and child relationships can be clearly illustrated. For example, Catrin which is composed by Gillian Clarke emphasises the theme of how powerful the bond is between parents and children. This point can be clearly addressed as Clarke provides the perfect metaphor ‘Red rope of love which...

William Faulkner explains why the story is not about him, but his details about a lonely poor woman named Miss Emily is very unpredictable. Miss Emily is unable to grip the idea of death and suffers from denial. After the death of her father, the people from the town expected her to be in a...

I. Introduction The death penalty in the United States is a constant source of controversy. Efforts to abolish capital punishment in America date back to over 100 years and continue to expand in present-day. In addition, all 50 states vary in their retention and application of the death penalty. Currently, the death penalty is legal...

Within The Lotos Eaters and Choric Song, Tennyson portrays a life complimentary from toil, where the mariners remain in a consistent dream-like state. The mariners resolve to stop wandering the seas, and settle in the tranquil, carefree world. Contrastingly, Ulysses wishes to continue exploring the world and wishes for more adventure. Ulysses would think about...

In this letter by George Bernard Shaw, the author conveys vivid detail that is emphasized about the death of his mother. Within this text, the author’s attitude towards his mother and her cremation is utilized by the use of diction, detail, and imagery that serves to express the authors feeling of sentimentality and rebirth from...