Hair is an important physical evidence, can be easily collected and stored at room temperature. Hair is made up of keratin protein, these keratin mixtures give advantage over usage of conventional biological evidences for determination toxicology of drugs in hair (Kintz et al., 2004, Musshoff et al., 2004). Detection window of drug abuse in hair testing is wider when compared with urine testing and limited by the length of hair sample. Results of hair analysis comes within several weeks while urine analysis results take 2-3 days.

Don't use plagiarized sources. Get your custom essay on
“ Forensic Toxicological Analysis of Hair ”
Get custom paper
NEW! smart matching with writer

Cocaine is an addictive drug it highs our energy level, known as powerful CNS stimulant properties. It is an abusive drug and worldwide is used creating serious problem widespread (Mercurio et al., 2017, Milione et al., 2017). Aim of this case study was to discuss prevalence of cocaine drug in hair samples which were collected from different sets of people for various medical-legal purposes.

These hair samples were then analyzed in forensic toxicology laboratory.

Hair was our probative physical evidence.

During cross-sectional study conducted from 1st January 2001 to 31st 2011. A total of 528 analyses for detection of cocaine in hair sample were carried out, 424 out of 528 were already analyzed as part of completion of autopsy procedure (Mercurio et al., 2017). 104 were stemmed from request from external user for different forensic purposes including (to complete adoptive practices, for divorce cases and child custody matters, driving licenses, to identify a suitable amount of intake of drug for personal use at laboratory of forensic toxicology of department of Legal Medicine of university of Perugia.

Each hair sample was weighed at least 250mg, was cut in accordance with actual standard guidelines of Italian forensic toxicology. After that each sample was put in separate plastic bag, properly labelled with date of collection and reason for sample collection (Gambelunghe et al., 2005). Only one sample from each client was taken ad processed with chemicals according to standard lab procedure. Control and standard samples were prepared. Calibration curve was prepared. Linearity method for each compound was investigated in range of 0.55-50 ng/mg with three replicates at each concentration. Further quantification was performed. Sensitivity was evaluated through LOD and LOQ.

Use of cocaine drug is harmful for human beings, it causes serious cardiac and non-cardiac impediments like psychological and psychiatric, neurological, renal, pulmonary, gastrointestinal, obstetrical and otolaryngological issues (Glauser and Queen, 2007)Cocaine is causative death agent in road accidents, suicides, sudden natural deaths and in homicide cases. (Dussault et al., 2001, Mittleman and Wetli, 1987). High ratio of drug usage by drivers is an alarming condition results in huge amount of road accidents. Data collected by this study supports previous studies which concludes that high consumption pf cocaine by people in society leads towards serious social problems including acute intoxication demanding hospital treatment, other rising issues like aggressive behavior and violence. Quality of life of population must be analyzed by continuing these types of studies to investigate possible correlations with this phenomenon. 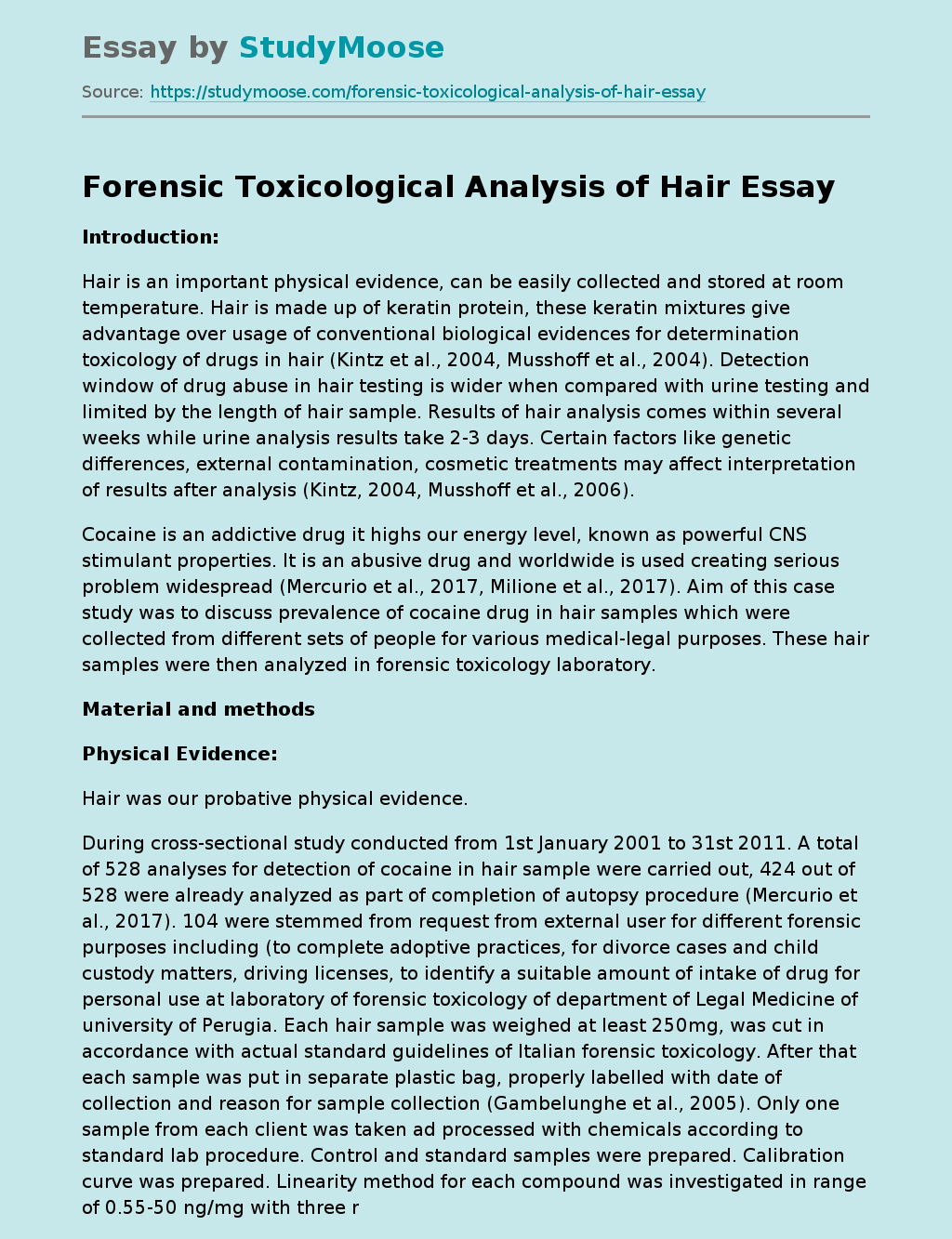