Based upon your expertise in regards to fingerprint and friction-skin development, explain why the following conclusion regarding human cloning is false. Premise: We all accept the proven fact that identical twins do not have the same fingerprints. However, human clones present a different set of friction skin development issues. No! Studies have concluded that, even though the fingerprints of identical twins may be very similar, they are not identical. Twins have a very high correlation of loops, whorls and ridges. But the details (for example, where skin ridges meet, divide into branches, or end) differ between twins.

Don't use plagiarized sources. Get your custom essay on
“ Forensic Fingerprint Analysis ”
Get custom paper
NEW! smart matching with writer

Twins share the same genetic makeup (DNA) because they are formed from a single zygote. However, fingerprints are not an entirely genetic characteristic. They are determined by the interaction of genes in the developmental environment of the womb. Fingerprint patterns are set between the 13th and 19th weeks of development in the womb. A variety of environmental factors may influence the shape of fingerprints.

Examples include differences in umbilical cord length (which can influence blood flow), access to nutrition, blood pressure, rate of finger growth at the end of the first trimester, and position in the womb. (Do Identical, n.d) Conclusion: The clone, being directly derived from the host, would indeed have the same fingerprints.

That is, the ridge events in a unit formation of the host and the clone would correspond. Cloning would be the only way for infertile couples to give birth to a baby with their own DNA. The child would not inherit memories or experiences of the DNA donor.

The child would be a time delayed twin of the father, mother or anyone else that donates DNA. Like a identical twin the cloned child would not have the same fingerprints as the DNA donor. In most cases, there would also be a considerable age difference between the clone and the DNA donor. This would make it unlikely that the two would get mistaken for each other. I don’t know how true or even possible this is, but I read an article a few years back on a woman cloning her daughter so that her daughter (who was sick) could have parts from the cloned child. Which I thought was crazy, because then they made a movie about it as well. So I really don’t even know if the article was true, or even if the movie is based off the article and if it’s true. (Human, Cloning, n,d) Explain the principles and processes used in the analysis, comparison, evaluation, and verification of latent fingerprints. Latent prints are formed when the body’s natural oils and sweat on the skin are deposited onto another surface.

Latent prints can be found on a variety of surface they are not readily visible and detection often requires the use of fingerprint powders, chemical reagents or alternate light sources. Generally speaking, the smoother and less porous a surface is, the greater the potential that any latent prints present can be found and developed. Investigators often perform cyanoacrylate processing, or fuming, of a surface before applying powders or dye stains. This process, typically performed on non-porous surfaces, involves exposing the object to cyanoacrylate vapors. The vapors will adhere to any prints present on the object allowing them to be viewed with oblique ambient light or a white light source. (Latent, n.d) Analysis involves assessing a print to determine if it can be used for a comparison. If the print is not suitable for comparison because of inadequate quality or quantity of features, the examination ends and the print is reported as not suitable. If the print is suitable, the analysis indicates the features to be used in the comparison and their tolerances. The analysis may also uncover physical features such as recurves, deltas, creases and scars that help indicate where to begin the comparison. Comparisons are performed by an analyst who views the known and suspect prints side-by-side.

The analyst compares minutiae characteristics and locations to determine if they match. Known prints are often collected from persons of interest, victims, others present at the scene or through a search of one or more fingerprint databases such as the FBI’s Integrated Automated Fingerprint Identification System. Evaluation is where the examiner ultimately decides if the prints are from the same source, different sources or is inconclusive. Inconclusive results may be due to poor quality samples, lack of comparable areas, or insufficient number of corresponding or dissimilar features to be certain. Verification is when another examiner independently analyzes, compares and evaluates the prints to either support or refute the conclusions of the original examiner. The examiner may also verify the suitability of determinations made in the analysis phase. (Techniques, n.d) Define class characteristics and individual characteristics of latent fingerprints. Present one example of each and explain how your examples fit the definitions. Latent prints are the most common type of print and take the most effort to locate since they are invisible. Latent prints occur when someone touches any porous or nonporous surface. 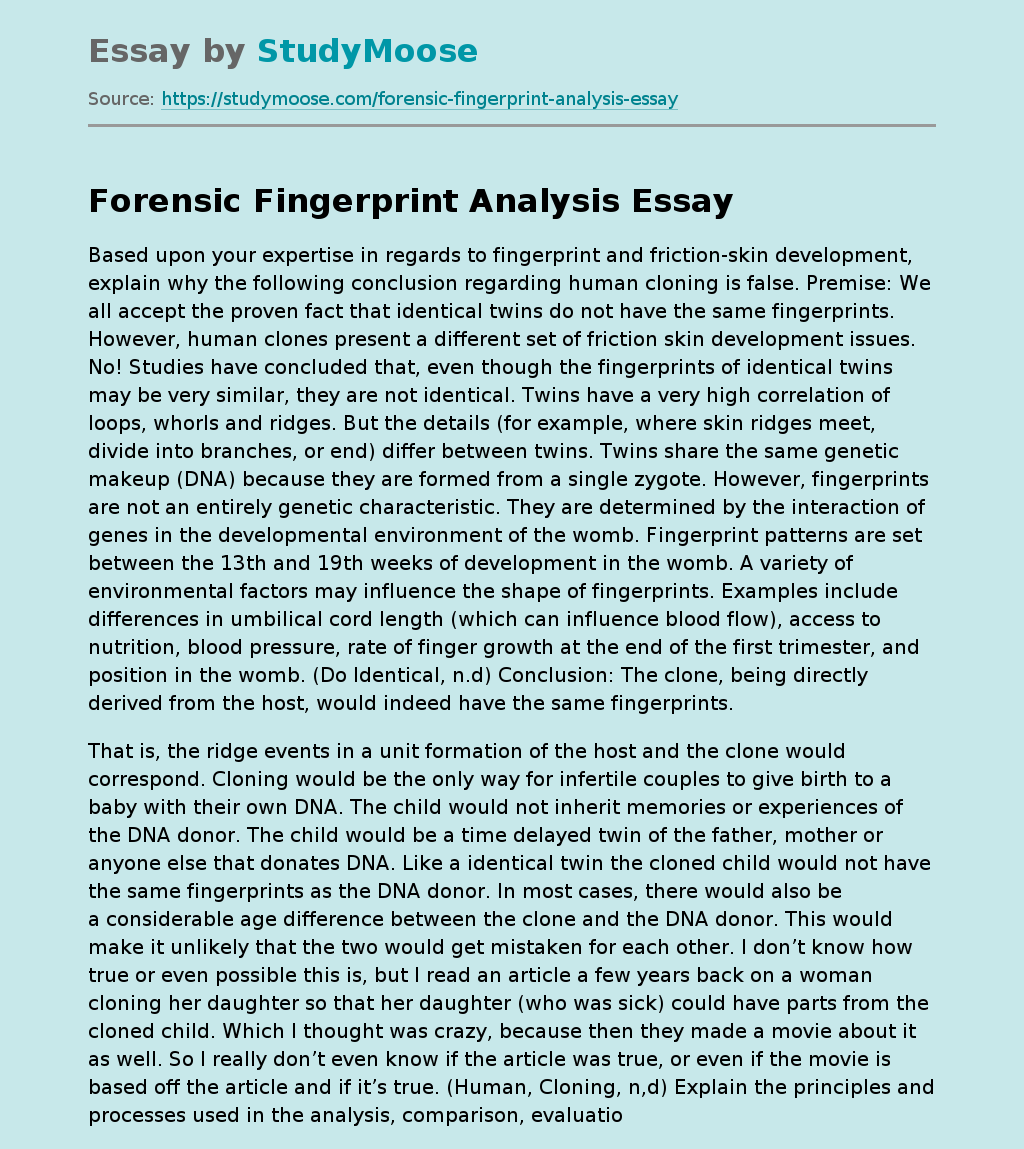