A foreign language is a language spoken in another country and is indigenous to that country. In many nations around the word there has been interest to initiate foreign language in Kindergarten before the kids joins primary school (Hawkings,1996).From the past experiences, there has always been frequently asked question whether the foreign language should start to be taught in the kindergarten, the level at which the kids are five to six years of age .This from concern that that foreign class is most boring ,the kids don’t posses good conversation skills, vocabulary needed is to learn the nuances of a foreign language and that the language requires higher comprehension which is difficult for the kids at this stage .

Don't use plagiarized sources.
Get Your Custom Essay on Foreign Language Instruction Should Begin in Kindergarten Just from $13,9/Page

Since there is need to teach the foreign language for we need help and social interaction from other nations and for other benefits from international relation, the question cannot be assumed. I strongly agree it should start at this level for four major reasons, first, their brain at this level has a greater capacity to absorb information, second, the world is getting more diverse and there is need for children to interact from different ethnicities, third, for education advancement, and lastly, its one factor for the professional and intellectual development.

According to satchwell, (2004) the children at this stage learn more quickly as compared to the older children. At the stage they are able to grasp new and basic information fast as compared to children in other levels especially high school who struggle much to grasp the structure of any new language. A good explanation to the fact is computer, which when used at first time runs very fast but slows down gradually with time. The kids are also so much susceptible to new information and develop interest to know more about it. This is same case when taught foreign language .They will became more curious about outer world culture and habits differing from them .It’s interesting to hear them go home and tell their parents what new they have learnt and consequently this increases their level of comprehension

On intellectual degree and professional scale, recent studies done, learning a new language can helps children develop their intelligence. This is because the process of reading, listening, writing and speaking abroad languages helps kids naturally develop the ability of coding and decoding process. Consequently, there is more links between neurons which are determining aspect of intelligence. Furthermore, in early ages, kids mind is like sponge which gets vocabulary quicker and more simply, naturally than that of older children. Therefore, when kids are taught foreign languages at earlier stages, they understand it deeper; learn faster, and the better they became (chambers, 2000)

On the other hand, on professional scale, studying foreign languages in kindergarten, kids are more probably to “leg up” over further in the profession market. This from fact that the world is also becoming so much diverse and the foreign language taught at this stage will enable the children to access the same opportunities with those that are of other countries or rather we can precisely say, the more young wait for the higher level the more they shall wait or even lack access to these opportunities. The benefit they gain is not just about their understanding concerning the foreign language, but latter in their studies also about the way of living of the nations speaking those languages. Clearly, the exact for bilingual, multilingual professional is advancing higher and higher for the reason of the expansion of globalization (Gil and alabau, 2006).

For academic advancements, young kids studying foreign language usually have good attention skills to select and maintain focus as compared to other children in older stage who only understands one language; they also develop proficiency in the level of language in reading, writing and speaking. Indeed according to the research done by Cornell Language Acquisition La (1962) it shows that elementary school starters are 70 per cent more likely to reach an intermediate level of communication; therefore exposure to secondary language in early ages plays important key role in academic success.

As if not sufficient argument to convince the opponents,Nitowski gives us the experience where she says that since she opened school in Danbury and started training that incorporated Foreign language in her Helena Nitowski kindergarten ,for the past fifteen years, it has proved to be integral component in producing productive member to the global society,. From Nitowski, Katz is so much exited that she even says, “To young children, instructing on foreign language is like wiring the brain in different ways.” The work of Nitowski never ended there, for latest seven years all the kids in Danbury have to attend fifth-grade (western Connecticut Academy) to study world culture and their language where they are basically taught in Spanish (Nikolov,M, 2009).

According to Ellis and Mark (2005), some children do not make connection between the two languages due to lack of awareness and understanding of them. They argue that, Foreign languages taught in Kindergarten do not stick to the children for more than a year. According to Mark, many people do not remember any foreign language words they learnt. He states, “Kindergarteners learn the same phrases, yet they do not remember.” That shows that they cannot retain as much information as my opponent states. “He goes ahead by saying that currently, elementary schools teach a different language every year and this does not help the children. Moreover, they become increasing confused with each coming year of elementary schools. I would like to strongly oppose the idea for, it’s all about which level to initiate and once started in Kindergarten, it should be continuous to the other levels.

From above arguments, these instructions in Kindergarten are much important for any nation. Though there has aroused concern from the current research done by National defense education (2003), More money has been used in schools to purchase equipments, materials, and other items. All this have been used to implement the instructional of foreign languages in Kindergarten, the major problem that exists is in determining which foreign language should be taught, for example, in New Orleans, French language is more of important to students.

To conclusion, the profession development, intellectual development and higher comprehensive power in kids should motivate the educators as well as the entire nations in educating kid’s foreign language in their early ages. Though implementing this at the stage when they are beginning to learn the very first instruction in life may look sensitive. Still, training foreign languages to kids in kindergarten is awarding. 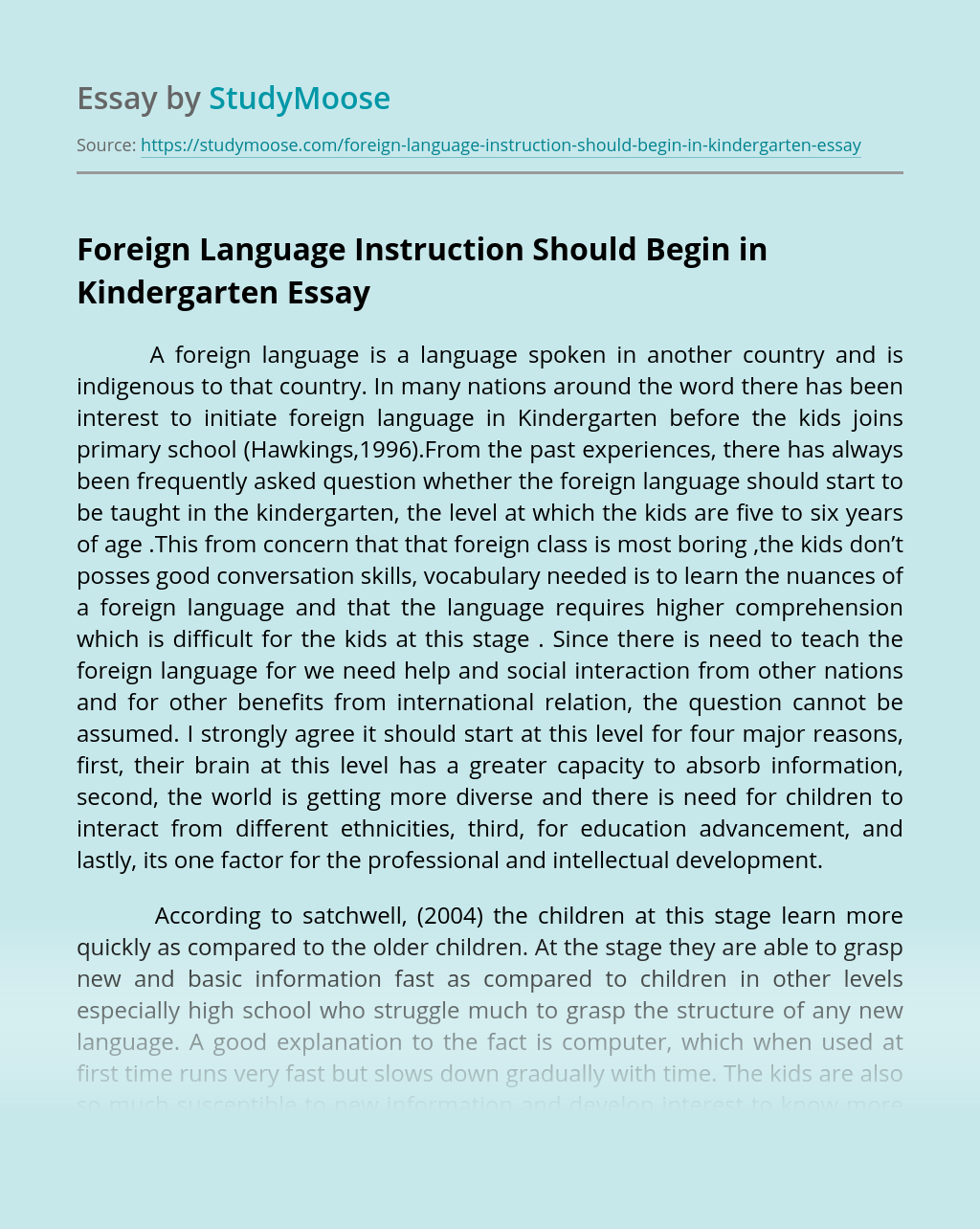 At the age of 5, a young boy from India boarded his very first flight while taking a trip from Chennai to Hong Kong. He developed a strong interest in airplanes. In the year 2008, this young kid from India was influenced when he took part in a NASA area camp. This kid and his...

In any country, there are political leaders who run their nations with the help of representatives of society. “Men make history and not the other way around. In periods where there is no leadership, society stands still. Progress occurs when courageous, skillful leaders seize the opportunity to change things for the better”. This quote by...

Have you ever wondered about the different purposes of art and their importance? While some art depicts the views of the Artists culture or personal fantasy and imagination, others refer to the reality of life, such as religion, experiences of life and the process of which we all relate to. Some cultures still believe art...

In this essay I will discuss the differences between Hume’s ‘natural’ and ‘artificial’ virtues. I will first give Hume’s explanation of why there is a need for a distinction or classification of virtues, and the basis on which he makes the distinction, before describing the two categories and their criteria. I will look at the...