'The Speckled Band' and 'The Man with the Twisted Lip'

In ‘The Speckled Band’: “At present it is out of my power to reward you for your services, but in a month or six weeks I shall be married, with the control of my own income”. This quote indicates that Helen Stoner’s step father is in the control of her income, this shows that women have no control over their finances and consequently the responsible man does. Another quote from ‘The Man with the Twisted Lip’: “”God bless you! ” cried the prisoner”, “I would rather endured imprisonment, ay, even execution, rather than have left my miserable secret as a family blot to my children”.

Don't use plagiarized sources. Get your custom essay on
“ ‘The Speckled Band’ and ‘The Man with the Twisted Lip’ ”
Get custom paper
NEW! smart matching with writer

‘The Man with the Twisted Lip’

This man has been humiliated because he has been caught begging when he is supposed to be of the upper class, ultimately the reason for begging was a sophisticated method of acquiring income to support the man’s family, also revealing the male superior intelligence. As we can see, the Victorian attitudes varied a lot when it came to the topic of equality between genders, this is concerning gender as the differences between men and women.

The previous points and evidence has displayed to us that Victorians saw women as foolish and not intelligent: “and that you have a most clumsy and careless servant girl?” (This was extracted from ‘The Scandal of Bohemia’).

Whereas they viewed men as intelligent and rational thinkers: “his mind was so absolutely concentrated on the matter before him that a question or remark fell unheeded upon his ears, or at the most provoked only a quick, impatient snarl in reply (This was extracted from ‘The Boscombe Valley Mystery’).

Also men are in control over women and women desperately are in need of men, from the ‘The Speckled Band’: “you may advise me how to walk amid the dangers which encompass me”.

The final main point discussed concerning gender is that women were expected to be at home, they also had authority over domestic affairs, in ‘The Man with the Twisted Lip’: “”Now, Mr Sherlock Holmes “said the lady as we entered a well-lit dining room, upon the table of which a cold supper had been laid out”. In the previous quote contains words (“dining room”, “cold supper”) that describe the condition of the room, these specific words that have been used distinguish the state of a typical Victorian woman.

Contrasting from women, men were expected to be the overall leaders of their family, in the ‘The Man with the Twisted Lip’: “he has no occupation, but was interested in several companies”, “is a man of temperate habits, a good husband, a very affectionate father”. These were the typical attitude towards gender in the Victorian era. Victorian Britain had negative assumptions of people of different race, culture and religion. Victorians also felt threatened by the presence of immigrants and non white British people within the British isle.

The unreasonable fear and hatred of foreigners is called xenophobia. Xenophobia was exactly the emotions the British public felt during this era. The Victorian views on India are that it was a vile country where Victorian people would change their custom if they were to go there. In ‘The Speckled Band’, we know that Dr Roylott travelled to India to train as a doctor: “Dr Roylott was in India”. The doctor was a genuine Victorian gentleman; however, his stay in India supposedly changed his character: “in my stepfather’s case it had.

I believe, been intensified by his long residence in the tropics”. This reveals the typical Victorian assumption that this man with great class and status has changed supposedly due to the long stay in India, a foreign country. Significantly this is indicating that the Victorians saw other cultures as mind manipulating in a negative perspective, staying in a foreign place can alter someone’s characteristics and personality. Foreign animals were also negatively associated to the atmosphere of foreign countries.

In ‘The Speckled Band’ the doctor had a passion for Indian animals so he brings them over to his home: “He has a passion also for Indian animals, which are sent over to him by a correspondent”. These animals are feared by the locals: “and he has at this moment a cheetah and a baboon, which wander freely over his grounds and are feared by the villagers almost as much as their master”. The terrifying animals are being associated to India, because the animals are dangerous and feared, this also causes fear of India because the Victorians see it as a dangerous country.

The Victorian unfairly created ideologies and judgements; they underestimated other cultures like the Indians. In ‘The Man with the Twisted Lip’, Arthur Conan Doyle has displayed clever remarks that significantly are hinting out the hatred of foreigners. East London at the Victorian era saw many imports and exports to and from the Far East in the Docklands area. It could almost be said that the Victorians were hypocritical, because of the fact that the British during this era and previous ages had also visited other countries, and in some cases they colonised others from all over the world.

These cases are evident throughout history for example: The British were heavily involved in the tragic African slave trade. Although these facts were more than likely known to the Victorians, they did not realise how the defenceless African people felt when foreign invaders came and destroyed their way of life and transformed it into a life of hardship and misery just to fulfil the desire for wealth. And still the Victorians claim that they fear foreigners who have simply come for financial and trade purposes.

Evidence supporting the case that the Victorians did not like their foreign visitors can be found in a variety of situations in ‘The Man with the Twisted Lip’. At the very beginning of the novel, the issue of opium is raised, however, not surprisingly foreign traders are involved too: “But now the spell had been upon him”. This quote is subliminally hinting that the opium is a spell and the suppliers of the opium (The foreign merchants) have put the spell on an “innocent” Victorian man: “had spoken to us of her husband’s trouble”.

The docks were an area full of immigrants: “among the dregs of the docks”; this is referring to the workers at the docks and their use of opium. “Dregs” signifies the docks as being a wasted, undesirable and filthy area, where no such Victorian would go: “approached by a step flight of steps leading down to a black gap like the mouth of a cave”. The detailed description and the use of imagery show us that going down the drug and alcohol den was like going down to hell. The description of the entrance to the “immigrant” ship: “and terraced with wooden berths like the forecastle of a emigrant ship”.

'The Speckled Band' and 'The Man with the Twisted Lip'. (2020, Jun 02). Retrieved from https://studymoose.com/forecastle-emigrant-ship-6962-new-essay 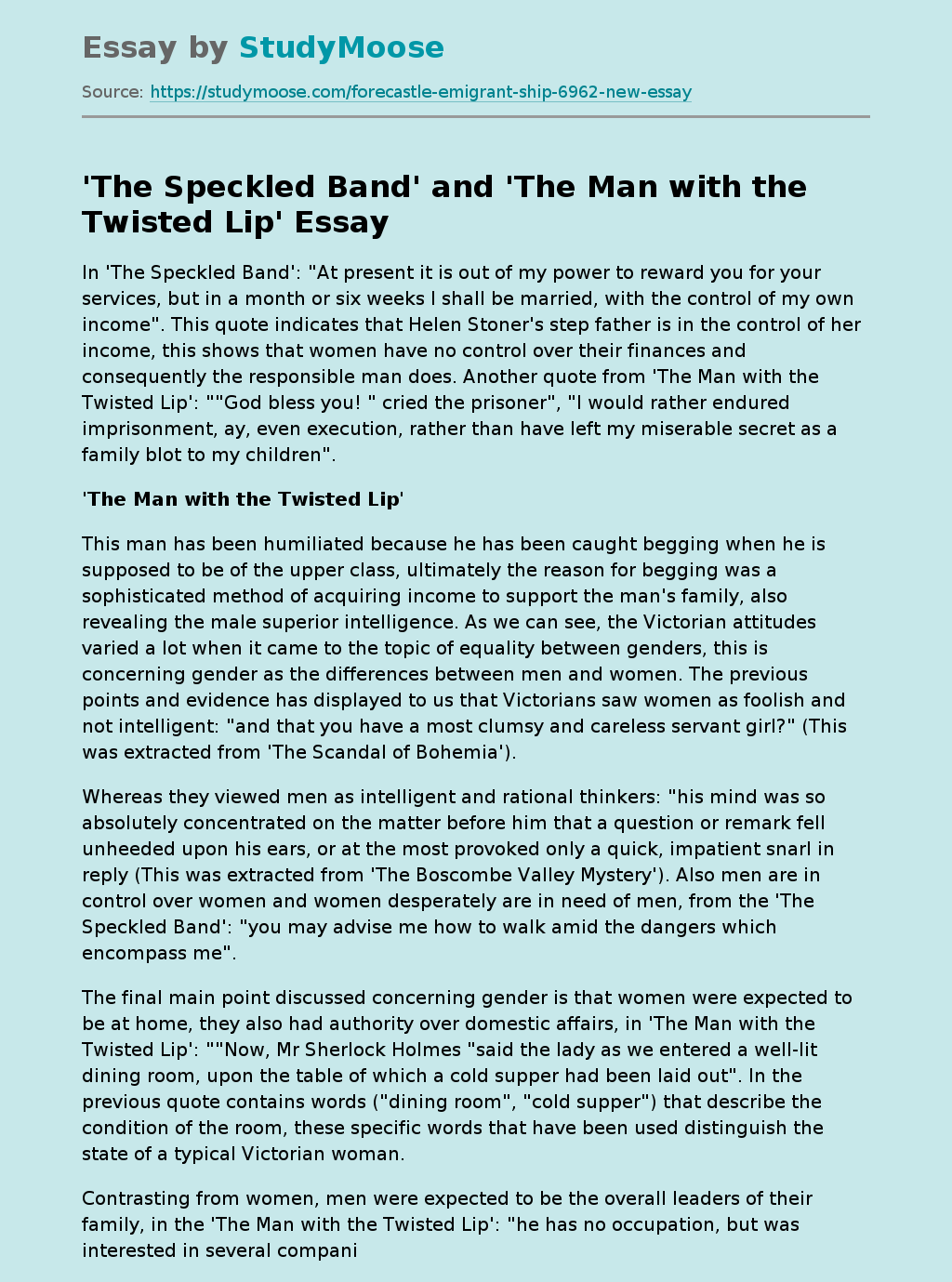