Exhibit 6, 8, and 9 (figures in $ millions) provides selected balance sheet items for Ford, General Motors, and DaimlerChrylser. The given information indicates that Ford carries the highest amount of cash and marketable securities among the three companies.

In 1999, Ford had $25,173 of cash and marketable securities while General Motors and Daimler-Chrylser have only $12,140 and $9,163. Comparing at an industry level, we as a team inferred that Ford may be carrying too much cash.

Ford competes in an industry that is notoriously sensitive to the economic cycle, and generally companies in cyclical industries have to keep cash in reserve to cover up for cyclical downturns. However, high amount of cash in the balance sheet does not necessary signal that a company’s future earnings has a high potential of growth.

A company sitting on cash tends to lose the opportunity to gain high returns generated from expanding business or investing in new projects. Keeping excess cash in the bank would be a mistake when the company could use the cash to earn a higher return than the company’s cost of capital.

It is important to note that although Ford holds the highest amount of cash, both Ford’s earnings per share of 5.86 and stock price of .

38 are lower than General Motors and DaimlerChrysler in 1999. Ford’s higher debt to equity ratio during this period may be the reason that caused the company’s cost of capital to increase and eventually decreasing the stock price.

Q.2) How does VEP work?
The main function of the Value Enhancement Plan (VEP) consists of both the options of stock repurchase and a stock exchange. Through this plan, shareholders would exchange their existing common stock and class B shares, one-for-one for new Ford common and new class B shares. Moreover, shareholders would receive either $20 per share in cash or the equivalent value in new Ford common shares based on Ford’s price in July 2000. Shareholders who did not make an election would be treated as if they made a $20 all-cash election. Meanwhile, if the cash option was oversubscribed, the $20-per-share payment would be distributed pro rata to ensure that the company distributed at most $10 billion. Dividends on the new shares would be reduced such that shareholders who elected stock only would get the same dividend payment on their package as the quarterly $.50 per share currently being paid. A third option the company offers to the shareholders allows them to receive a combination of cash and stock worth of $20.

Q.3) What are the alternatives for distributing cash?
Share Repurchase –
Institutional shareholders urged Ford to conduct share repurchase over paying dividends. But Ford preferred receiving cash dividends since that provided the family members with liquidity without having to sell Class B shares and run the risk of diluting family’s control. (Ford had 1.15billion common shares and 70.9million Class B shares outstanding. The family retained a 40% vote as long as it owned 60.7 million shares. Reduction below 60.7million until 33.7million would reduce the family’s voting power to 30%. Below 33.7% of Class B shares’ ownership, all privileges would be lost) Mr. Ford had said that the family had agreed to take its portion of the distribution in the form of new common shares, not cash. The family thus would have tens of millions of common shares to sell for liquidity purposes without reducing their holding of Class B shares. Pay Dividends Uniformly–

W.r.t. the Value Enhancement Plan, dividends on new shares would be reduced as there was a $10billion limit to distribute cash. Dividends with incremental growth in value are absent. Ford wants to keep a large amount of cash to itself because of the uncertainty associated with the cash flow. It has the option to distribute the cash in the form of dividends. Shareholders were taxed on cash dividends at ordinary income rates whereas gains realized on shares that were repurchased received capital gains treatment. There were no cash deductions for the company in the above two methods. Hence both the procedures were same for the company.

4. What problem is the VEP plan designed to solve?
The primary reason why Ford designed the VEP was that Ford believed its stock was undervalued and the undervalued stock was limiting the company’s ability to use its stock for acquisitions or to attract, retain or incentivize employees. Ford thought the VEP would enhance the value of its outstanding shares because the recapitalization will highlight its cash reserves and cash flow generating capacity, and also indicates management’s confidence in the future of the business. In addition, Ford believed the adjustments in the employee incentive plans by the recapitalization will tie Ford management’s compensation even more closely to the performance of its stock price. Additionally, as a part of VEP, Ford announced the Visteon spinoff was not only designed to allow Ford to focus on its core business but also give Visteon a chance to build its client base outside Ford. However, some analysts and shareholders (TIAA-Cref, Calpers) argued that the VEP was designed to avoid a risk that Ford could face due to a share buyback. Because a share repurchase would reduce its voting right in the company, the Ford family considered VEP as a suitable option.

5. As a shareholder, how would you approve the VEP? Would you elect cash or stock? At face value the VEP seems to be a good idea; return value to stockholders in the form of cash, without having to compromise control over the company. As is gleaned from the case, Ford has approximately 23 billion dollars in cash reserves with the proposed VEP set to return up to 10 billion USD back to shareholders. Executive leadership tout flexibility,liquidity and alignment as advantages of the proposed project, however, a couple of valid questions have been raised (two institutional investors in particular). The proposed VEP if successful would see the cash reserves of the company reduced by 10 billion, this drastic reduction in cash will send mixed signals to analysts and the market as a whole. It could be perceived as a ploy to return money to shareholders in anticipation of a wind down or poor run of performance.

Though flexibility and realignment is mentioned, that does not seem to be the case.The program only allows owners of both common shares and class B shares the opportunity to obtain liquidity without having to lose control of their class B shares. The program will have the Ford family exchanging their common shares for the new stock in addition to the $20 or new stock options. This is particularly a welcome boon (as the case alludes to their need for liquidity to handle settlement of divorces and estate taxes). If the stock of Ford is perceived undervalued then the advice would be for the shareholder to accept the VEP as the share price increases in an addition to the opportunity to reinvest in the additional new common stocks. In conclusion we would not approve of the VEP as we believe the benefits of the program does not benefit all stockholders, rather the pros are stacked in favor of the Ford family. On the contrary a common stockholder will accept the VEP and accept cash payment if the stock was perceived to be overvalued and further stock options if the stock was perceived to be undervalued. 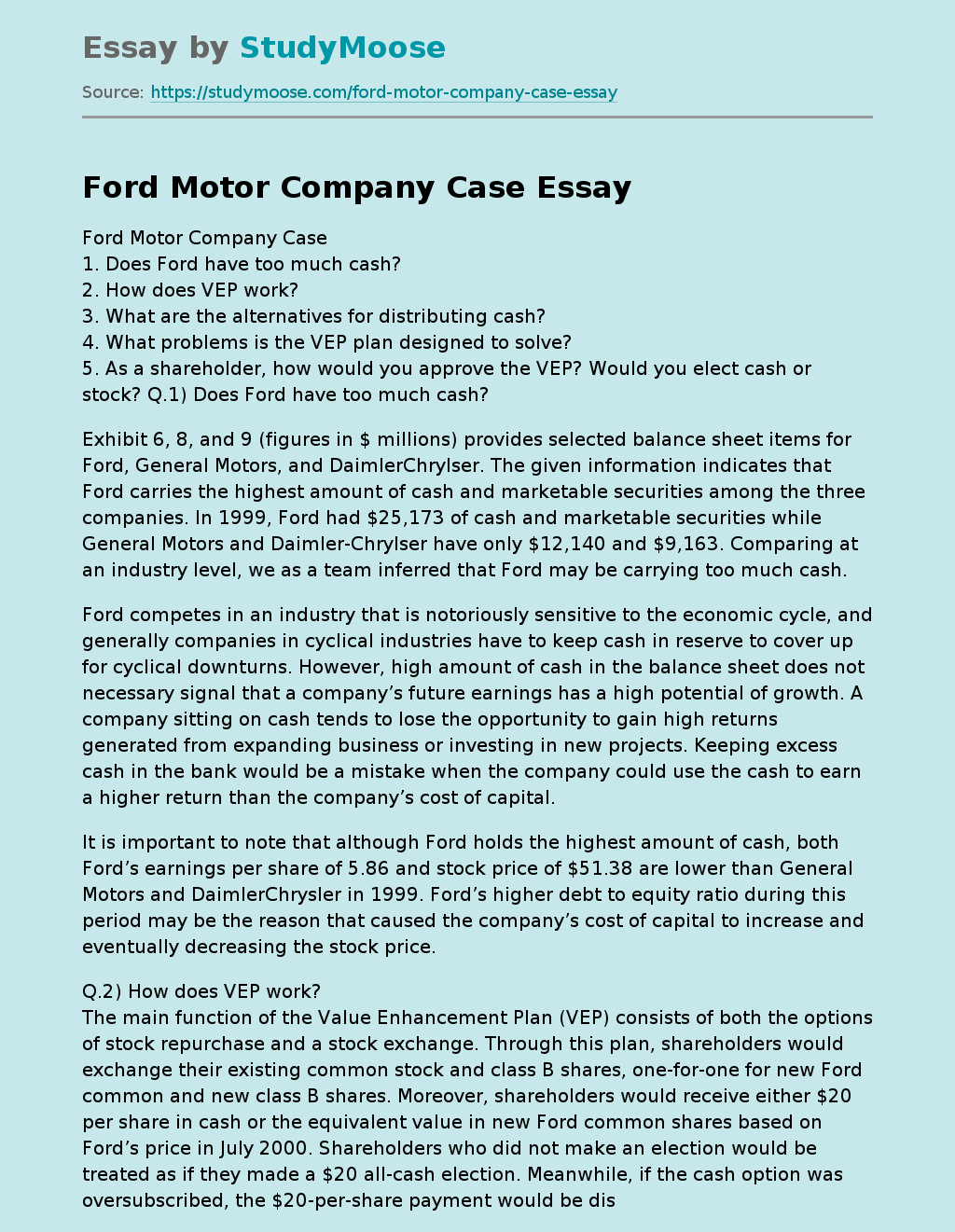