Forced marriage is a crime in Australia, and is punishable by up to seven years in prison. Under Commonwealth law a forced marriage is one where a person gets married without fully and freely consenting because they have been coerced, threatened or deceived. A person can be coerced through obvious means such as force, detention or duress, or through more subtle means like psychological oppression, abuse of power or taking advantage of the person’s vulnerability. The crime of forced marriage can apply: to all victims, regardless of their age or gender, to legally recognised marriages, as well as cultural and religious ceremonies and registered relationships, To marriages that occur in Australia (including where a person was brought to Australia to get married), as well as where a person is taken overseas to get married.

Don't use plagiarized sources.
Get Your Custom Essay on Forced Marriage Just from $13,9/Page

According to The Universal Declaration of Human Rights, forced Marriage falls under article 16 – http://www.claiminghumanrights.org/udhr_article_16.html UDHR Article 16 states that

1. Men and women of full age, without any limitation due to race, nationality or religion, have the right to marry and to found a family. They are entitled to equal rights as to marriage, during marriage and at its dissolution. 2. Marriage shall be entered into only with the free and full consent of the intending spouses. 3. The family is the natural and fundamental group unit of society and is entitled to protection by society and the State. Media Article one: Girl Kidnapped for Forced Marriage. Suffer Rising Crime in India Teenage girl, Rupsona was walking home from school when three men kidnapped her at knifepoint near her village in the Indian state of West Bengal.

They forced her into a car and transported her across the country to a man who had paid $800 for a bride. Rupsona said she was forced to marry the man and abused by him for 14 months until she was rescued. In India, cultural preferences for a son have helped fuel a growing gender divide, which has led to an increase in the number of women being kidnapped and forced into wedlock I choose this article to show a real life situation of forced marriage, and the harsh reality that it involves.

The Australian Government is actively working in consultation with stakeholders to improve community awareness on forced marriage issues. This includes developing a communications awareness strategy on human trafficking and slavery. As part of this strategy, the Australian Government will develop a series of awareness materials on early and forced marriage—including materials written in relevant community languages. The government is also working in line with community investors to raise awareness of forced marriage issues with religious and civil celebrants, migrant and legal resource centers, domestic violence services, child support agencies—as well as people from culturally and linguistically diverse backgrounds. Article 23 of the ICCPR states that

1. The family is the natural and fundamental group unit of society and is entitled to protection by society and the state. 2. The right of men and women of marriageable age to marry and to found a family shall be recognised. 3. No marriage shall be entered into without the free and full consent of the intending spouses. 4. States parties to the present covenant shall take appropriate steps to ensure equality of rights and responsibilities of spouses as to marriage, during marriage and at its dissolution. In the case of dissolution, provision shall be made for the necessary protection of any children. Non-Legal Responses. Non-government organisations work to promote and enforce coverage of the forced marriage issue.

For example NGO SACH (Struggle for Change) is an organisation, which run a major awareness campaign. They run workshops and create social justice for communities. The Forced Marriage Unit worked closely with NGOs (NGO SACH) and community groups to increase the protection and support available to victims of forced marriage. For example, in November NGO SACH provided funding for the development of a range of social media projects including web pages, text messaging and smartphone applications to raise awareness and support peer mentors.

Evaluation of Legal and Non-Legal Responses.
The responses to Forced Marriage are highly affective in some areas and are lacking effectiveness in others; meaning the responses have made forced marriage more of a known issue, but have not completely stopped the issue. It is evident in many other human right violation issues as well as forced marriage that just because the violation is illegal doesn’t completely abolish it from happening. The legal and Non-legal responses create highly accessible and understandable knowledge for the wider community creating the highly affective overall response. Without these responses forced marriage would not be an evident issue and it would be ignored, creating more human right breeches and an increase in un-wanted physical and pressured relationships. 1 in 9 girls are forced into a marriage by the age of 15.

Media Article 2 – Too young to wed: Indian girls say no to forced marriage This Article refers to the breakthrough of children being pressured standing up for their rights. It explains Keshanta and Laali were 13 years old when their families pushed them together to get married. Laali Bairwa, 15, isn’t sure just yet what she wants to be when she grows up. But she, like her classmates in a rural part of Jaipur in the Indian state of Rajasthan, is certain she doesn’t want to be a child bride. This article reflects education preventing the forced marriage. This article reflects the changing values and morals of society. I chose this article to show the effects of the legal and non-legal responses.

Overall Effectiveness.
Organisations of legal and non-legal responses work together unknowingly to create awareness of the Human Rights Violations. This further proves an effective response to the issues and supports an overall idea to prevent forced marriage in the future.

Media Article 3 – Forced marriage ruins the lives of too many girls, so we’re working to end it This article doesn’t focus on a particular occurrence of forced marriage, rather it talks about the statistics and problems faced by each affected individual. Girls who are forced into marriage are often trapped in poverty with no means to lift themselves out. These girls are robbed of an education, vulnerable to death in childbirth and at a greater risk of domestic violence. The article states, “The good news is that some countries are making progress on reducing child marriage, but progress is slow. Ending child marriage will take time and requires unstinting commitment at community, national and international level. The UN is playing its part but we need others to join so that the rights of millions of girls are no longer violated.” I again chose this article to reflect the overall changes of societies views and reactions to forced marriage. The article shows that even though the issue of forced marriage is still occurring, the responses to the issue are growing in a much more positive way.

Overall Conclusion:
Forced marriage is evident within the world and in Australia. A marriage is seen as forced when there is undue pressure to wed causing psychological pressure. It is stated under the UDHR Article 16, which explains equal rights and consent of a marriage. There are many legal responses, which build together amendments, furthering the knowledge of forced marriage and stating it as a serious exploitation and crime. Legal Responses also fall
under Article 23 of the ICCPR. 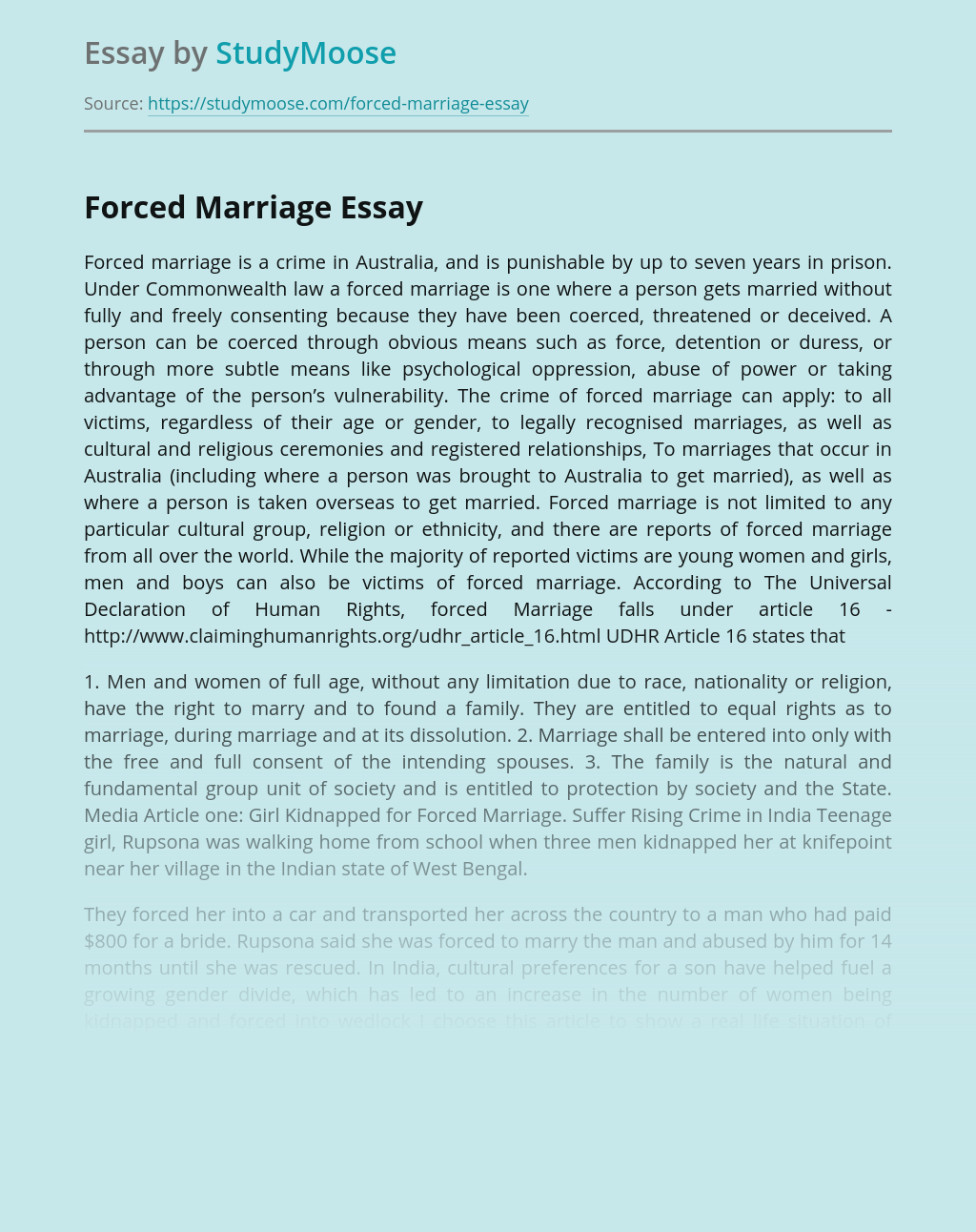 In today’s economy keeping people in prison is becoming an ugly, expensive mess. There are now so many alternatives to incarceration that we need to explore and start using. Johnny Cash wrote a song called “Folsom Prison Blues” describing the angst of inmates, permanently immortalizing them in the publics minds. However, now that prisons across... VIEW ESSAY

Prisons today are overcrowded and are a growing problem in today’s society. “In 2008, the Pew Center on the States reported that incarceration levels had risen to a point where one in 100 American adults was behind bars. A second Pew study, the following year, added another disturbing dimension to the picture, revealing that one... VIEW ESSAY

Forced marriage is a crime in Australia, and is punishable by up to seven years in prison. Under Commonwealth law a forced marriage is one where a person gets married without fully and freely consenting because they have been coerced, threatened or deceived. A person can be coerced through obvious means such as force, detention... VIEW ESSAY

In the juvenile justice system believes in giving a juvenile a second chance, and protects their privacy. They also want to make sure they receive treatment and support services rather than just punishment. The juvenile system focuses more on their needs, and those goals are met with treatment and rehabilitation so they won’t become repeat... VIEW ESSAY

As I am told to write this rehabilitation paper and to quote a definition, I understand that rehabilitation basically is a word of hope in the prisoner life not only for prisoners but as well for the selected individuals that strive to make prisoners better members of society. Don't use plagiarized sources. Get Your Custom... VIEW ESSAY