The movie for colored girls was made based on the novel which is also entitled for colored girls by Ntozake Shange, the movie express the struggles and obstacles that African America women face throughout their life. The movie reveals seven women who are brought together through their own troubles. The movie deals with love, abandonment, rape, and abortions; at the end of the film all seven women come together evoking the power of women hood amongst black African American females.

“Being alive and being a woman is all I got, but being colored is a metaphysical dilemma I haven’t conquered yet! “ -Tangie (a colored girl)

The quote that stuck out to me the most was Tangies, (Stated above) the reason why was because a lot of women can relate to not understanding their race.

Don't use plagiarized sources. Get your custom essay on
“ For Colored Girls ”
Get custom paper
NEW! smart matching with writer

African American women can also feel as though everything about the world in regards to African Americans including theories can be questioned for examples statics state when given by a person in general that.

African American women as well as Hispanic women are likely to be considered a single parent rather than a Caucasian. The truth is that a Caucasian is more likely to be a single considered parent thanks Hispanics and African Americans. This truth was specified in my psychology 101 class. It was stated through conversation of stereotyping Tangie (The one who stated) the quote. Her character was a woman who seeked love from different men every night being a bartender at a local hotel.

Her character made people view her for what she is and not who she was considered to be.

As a young girl my mother’s use to tell my brothers and I to make people treat us as an equal, because we are Kings and Queens. As a child I didn’t understand, now as young women I understand. I am very proud of my color skin as well as the fact of being considered an African American female. The whole ideal about this movie is letting the African American culture know that in order to be accepted we have to accept ourselves first. The movie reveals how strong African American women are, just like they were back when slavery existed.

If it was paid any mind it was the black woman that taught us how to cook and season our food. It was the black woman that taught you how to raise your children. It was black women who were breast feeding and raising your babies during slavery. It is the black woman that had to endure watching their fathers, husbands, and children beaten, killed, and thrown in jail. Black women were born with two strikes against them: being black and being a woman. Through all this, still they rise! It is because of the black women’s strength, elegance, power, love and beauty that bring them together not just the outer beauty that captivates people, but more so what they signify. It is not the fact that they come in all shapes, sizes, colors and shades that people pay attention to.

Their inner beauty is what most find appealing, especially in the movie each colored girl stood for something without even realizing it. Their strong spirit, loving and nurturing souls, their integrity, their ability to overcome great obstacles, their willingness to stand for what they believe in, and their determination to succeed and reach their highest potential while enduring great pain and suffering is why this movie captured my attention. 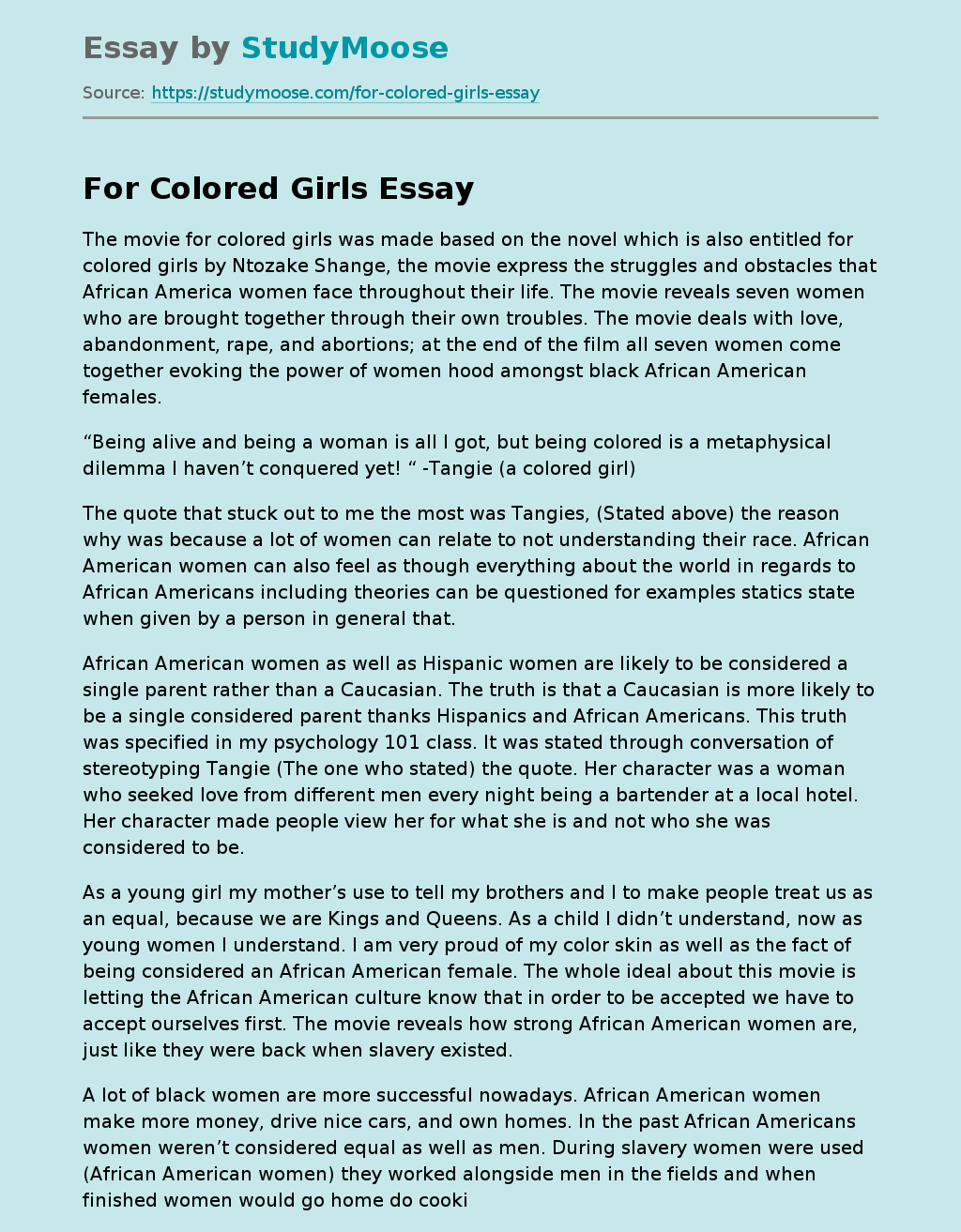