1.The language of the poem is distinctive in its use of verbs. Scan the verses and identify the types of verbs used. Can you suggest why they fit the scene?

In the first verse there are three verbs: plunging, bounced, and bounced. Plunging and bounced are effective in fitting the scene because they are words synonymous with football: footballs bounce, and players plunge for the ball, a goal, an attack.

They are all normal verbs that are commonly used and describe a visible action.

In the second verse there are also three: jumped, spouted, and blew. Jumped and spouted imply someone actively doing something, this relates to football. Blew does not, but it is used to tell us what the ball is doing, so it is fitting that it is an abstract verb.

The other two are normal verbs, again, used to describe something that we can physically see occur. The third verse contains five verbs; bounced, jumped, and blew again, and shouted and hung.

Again, a verb that seems passive and inactive such as ‘hung’ is utilised to tell us about the ball, and shouted is used to stress the activity occurring during the game and the excitement.

The fourth has five: piled, darkening, mixed, threw, and lowered. Piled connotes an image of the men piling atop each other competing for the ball, darkening is a gerund which actually describes the scene and provides imagery, mixed implies chaos, this intensifies the connotation of fun, threw could connote an image of a goalie throwing a ball back to his team, and lowered is used to connote imagery.

Another interesting use of verbs in the text is ‘bobbed’, in the fifth paragraph, an obvious reference to the motion of the ball. The same is applicable to the use of ‘flew’ in the seventh verse. ‘…sank foundering’ (a verb phrase) could be a reference to water, used to support the simile “Spouted like water to head it”.

2.Football is a team game; each player depends on his fellow. Can you find an example of a simile that seems to describe unity of action? “Spouted like water to head it” (verse 2) could be a reference to the fluid solidarity of the players. Working together without giving it a thought, as if their action were innate.

3.Which metaphor seems to reflect the predominant imagery of Cock-Crows? Why does Hughes choose it?

4.The fourth and fifth verses seem to mark a change in atmosphere. Can you suggest how this change occurs? This change occurs because the language used changes from childish and happy to romantic and it provides an ethereal feel to the poem from then onwards. The language becomes significantly more dramatic. Verses prior to them utilise words such as ‘bounce’ and other light-hearted verbs, whereas from the fourth and fifth verse, phrases like ‘fiery holes in heaven’, ‘to puddle glitter’, ‘sank unfoundering’, and ‘golden holocaust’ are employed to describe the setting.

6.The final verse, as is common in much of Hughes’ poetry, leaves us puzzled and questioning the poem’s overall meaning

8.What is the overall impact of this poem upon the reader?
The reader wishes that they could join in. The poem is a positive one with pleasant imagery. It is romanticised which is unusual given that football is often considered a rough, primitive sport. It may make the reader nostalgic with memories of their childhood.

Football at Slack Analysis. (2016, May 15). Retrieved from http://studymoose.com/football-at-slack-analysis-essay 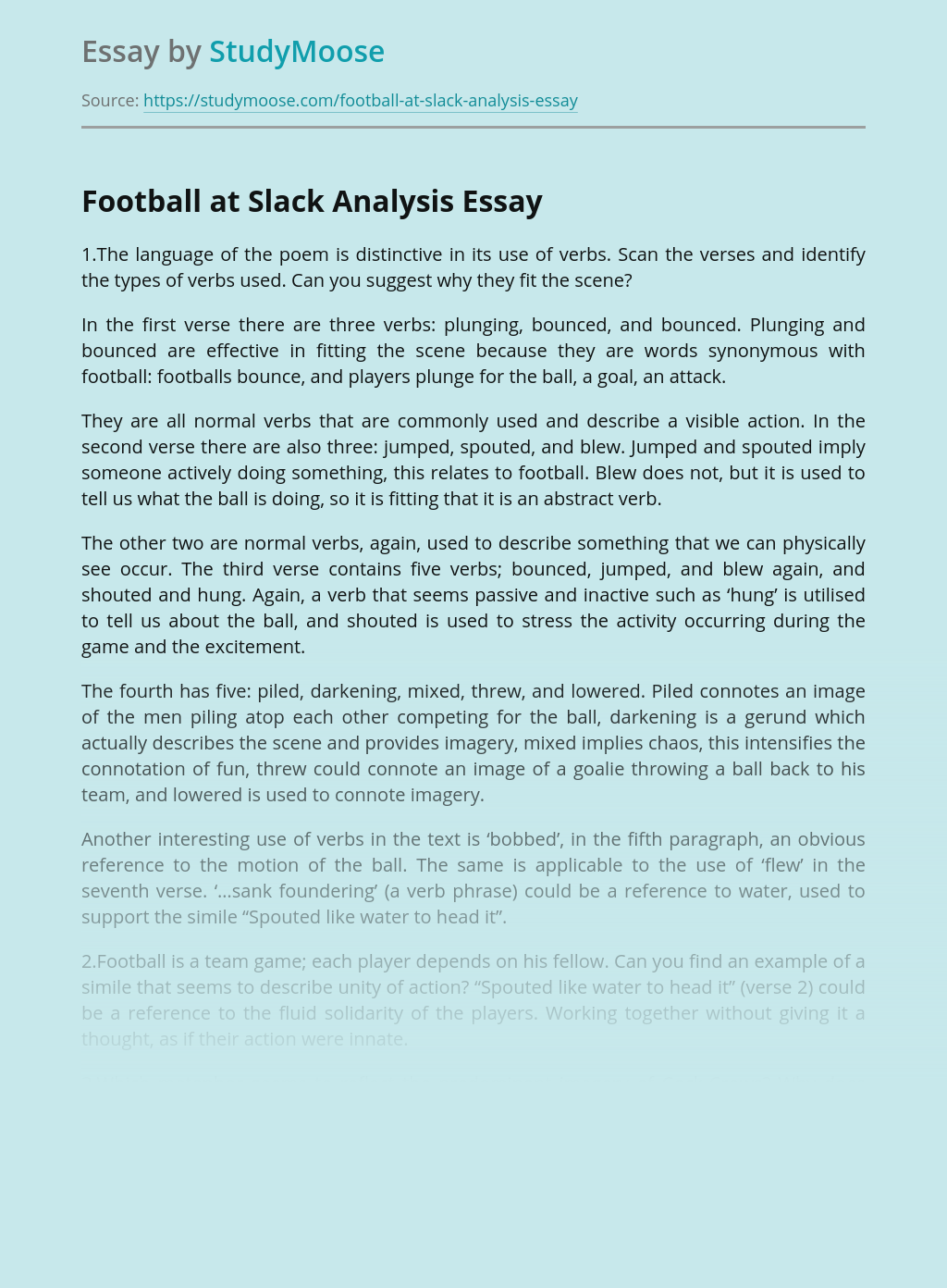 Don’t waste time
Get a verified expert to help you with Football at Slack Analysis
Hire verified expert
$35.80 for a 2-page paper
Stay Safe, Stay Original