Don't use plagiarized sources. Get your custom essay on
“ Food Availability ”
Get custom paper
NEW! smart matching with writer

Rice was introduced after Australia started to accept migrants from Asia. When people move from one country to another they bring the knowledge ‘’food’’ that they had with them. Therefore, rice has become popular because it is easily steamed or boiled and is eaten at all meals. For example, most migrants are not first generation. The family influence had taught the young family members the culture and beliefs about rice such as how to cook and eat.

Secondly, cash crop farming is a type of farming for the purpose of making profit. A transnational company is a large company whose business dealings operate in many counties.

Local people work the land and receive an income. For example, the famers will get a higher paid to grow things on the farm that being requested by the companies but the disadvantage is its high to start but then de-values. So, the lack of rice had been struggling in Australia. Thirdly, farming technology.

Rice is a very hard staple food because it takes about 2-3 months to grow. Farmers used to use animals such as buffaloes or cows to help them farm. It’s tiring and uses lots of energy but it’s still convenience for people every day needs.

Nowadays, Developed countries like Australia uses the knowledge of food production and processing to help to increase the availability of food. Social is influences by society which means that the variety of people inspire what we eat. We are now more understanding of the cultures and lifestyles as we are living in a multicultural world. Australian started to get to know more foods such as Asian, Italian, Mexican, etc… For example, we all know that Asian countries such as China have rice for their everyday meals. We also know that rice goes with every meals and can be eaten with soup and people influence this to one to another.

In addition, technology influences microwaves and rice-cookers which mean that we are being able to cook rice faster and easier. For example, you can go out to buy a package of frozen rice and microwaved it for 3 minutes or you can use a rice cooker to cook by putting your rice in and press start. As there are many choices you can keep it warm for a very long hours, non-sticky rice or quick cook. It saves time and labour. Where we look back 200 years ago, we did not have the ability to cook rice like the new technology. Plus, Marketplace is where consumers purchase rice from.

The accessibility has been changed because we are able to plant rice ourselves. We have a choice to purchase such as online payments, shopping under one roof and the stores are located most of the places. Also, it’s cheaper than importing rice from overseas. Moreover, the political is a system of government in a country. The Australian government has a protection policy and a control on food imports of foreign products to achieve the goal. The government decides whether to let where rice imported from. For example, back in time, we were not able to import rice into our country because of our restrictions and low economic.

To sum up, Economics of food means that people have money to buy food. Without money developing countries won’t have food available. But because we are living in a developed country we are able to have a high living standard compared to the poor countries. Rice is cheap in Australia therefore the lower the prices are the most people tend to spend the money. This money will be recycling. In conclusion, the influence of historical and contemporary factors on a staple food ‘’rice’’ that I’ve made above such as migrants, farming technology, cash crops, social, and technology, political and economic had changed Australia rapidly. 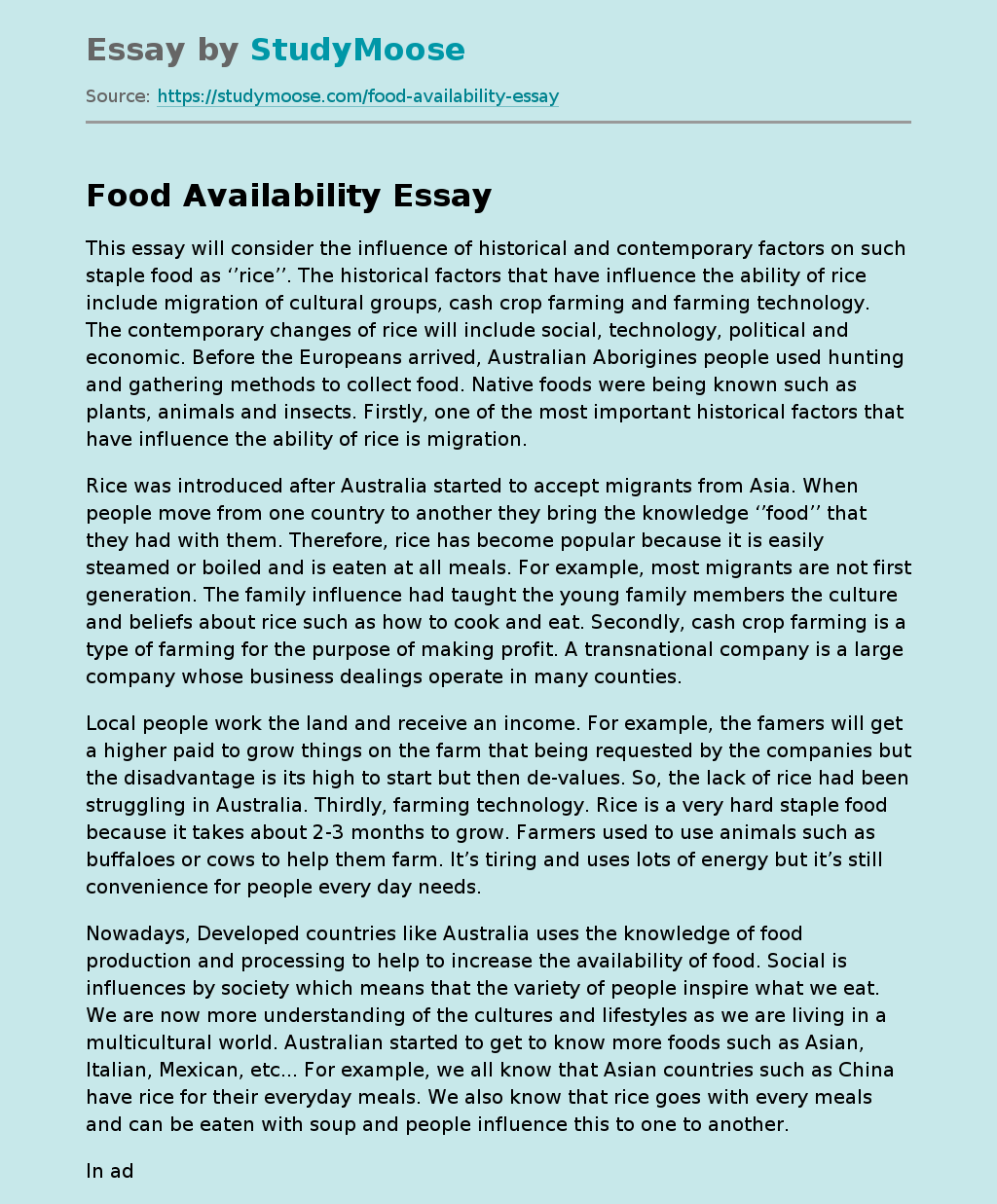