Food Adulteration
Food adulteration with poisonous chemicals has reached a dangerous proportion posing serious health hazards in the country, said experts and government officials yesterday at a discussion jointly organised by The Daily Star and non-government development organisation RDRS Bangladesh. Basic food items on the market like rice, fish, fruits, vegetables, and sweetmeats are adulterated with hazardous chemicals in an indiscriminate manner, though food-grade preservatives and colours can be safely used in permissible quantities, said the discussants. The discussion on “Hazards of Food Contamination in National Life: Way Forward” was held at The Daily Star Centre in the capital.

Don't use plagiarized sources.
Get Your Custom Essay on Food Adultration Just from $13,9/Page

Views about the proportion of adulterated food items on the market varied between 70 and 90 percent. RDRS put the proportion at more than 90 percent referring to test results of government laboratories published in newspapers, while the officials and researchers present at the discussion said it is 70 percent. More than 76 percent food items on the market were found adulterated in a random survey by Public Health Laboratory of Dhaka City Corporation in 2004.

There are approximately 150 food items in the country, said SK Roy, a senior scientist at the International Centre for Diarrhoeal Disease Research, Bangladesh (ICDDR,B).

Poisonous residues in food items leave the worst impact on children’s mental and physical growth and women’s fertility, cause cancer, and damage vital human organs like liver, kidney, and heart, the discussants said. Roy in his presentation said formalin is applied on fish for preservation; calcium carbide on fruits to ripen; brick dust in chilli powder; urea to whiten rice and puffed rice; sawdust in loose tea; soap in Ghee; and artificial sweetener, coal tar, and textile dyes in sweetmeats. Formalin applied on fish, fruit, meat, and milk causes throat cancer, blood cancer, childhood asthma, and skin diseases, he said. Poisonous colouring agents like auramine, rhodomine b, malachite green, yellow g, allura red, and Sudan red applied on food items for colouring, brightness, and freshness — damage liver and kidney, and cause stomach cancer, asthma, and bladder cancer, said Roy. Colouring agents chrome, tartzine, and erythrosine are used in spices, sauces, juices, lentils, and oils — causing cancer, allergy, and respiratory problem. Calcium carbide may lead to cancer in kidney, liver, skin, prostate, and lungs. Rye flour used in barley, bread, and wheat flour contribute to
convulsion and miscarriage. Hormone used in cauliflower causes infertility of women. Agino moto or monosodium glutamate used in Chinese restaurant food items cause nervous system disorder and depression. Urea put in puffed rice and rice causes nervous system damage and respiratory problem. Sulphuric acid used in milk for condensation causes damage to the cardiac system. Dr Syed Humayun Kabir, director of Bangladesh Standard and Testing Institution, said not just anyone should get trade license to produce food items, and the mass media must check the authenticity of a food product before carrying its advertisement. Application of excessive and unauthorised pesticides also cause contamination of food, he said adding that additives used for making food items attractive can be lethal if those are cancerous. But some permitted preservatives, thickening agents, gelling agents, antioxidants, and stabilisers could be harmless if applied in appropriate quantity, said Kabir. Food grains, vegetables, and fish also get contaminated by industrial pollution of the soil, air, and water, he said. Burnt engine oil is used to fry Jilapi, while artificial fragrance is applied on flowers, said Khalil Ahmed, executive magistrate of Dhaka City Corporation, who operates a mobile court against adulterated foods in the capital.

Dr Selima Rahman, executive director of RDRS, said most of the food adulteration occurs in the hands of middlemen in the process of transportation and marketing. Urea is dangerous for kidney, she said adding, “At present, a total of two crore people are suffering from kidney diseases for various reasons.” Food adulteration has been happening on a massive scale for the past half a decade due to increased investment, expanded market, and high consumer demand, according to Roy. Some items like guava, lemon, and hog-plum [amra] are however still free from chemical aggression, he said. Greed for fast super profit and moral degradation among food traders have led to today’s alarming situation, he added. ”The pattern of diseases is changing. In our student life, prevalence of infectious diseases was high. Now the number of patients suffering from cancer, diabetes, and kidney diseases are on the rise due to food adulteration,” said Dr Md Golam Kibria Khan, associate professor of Dhaka Medical College Hospital. 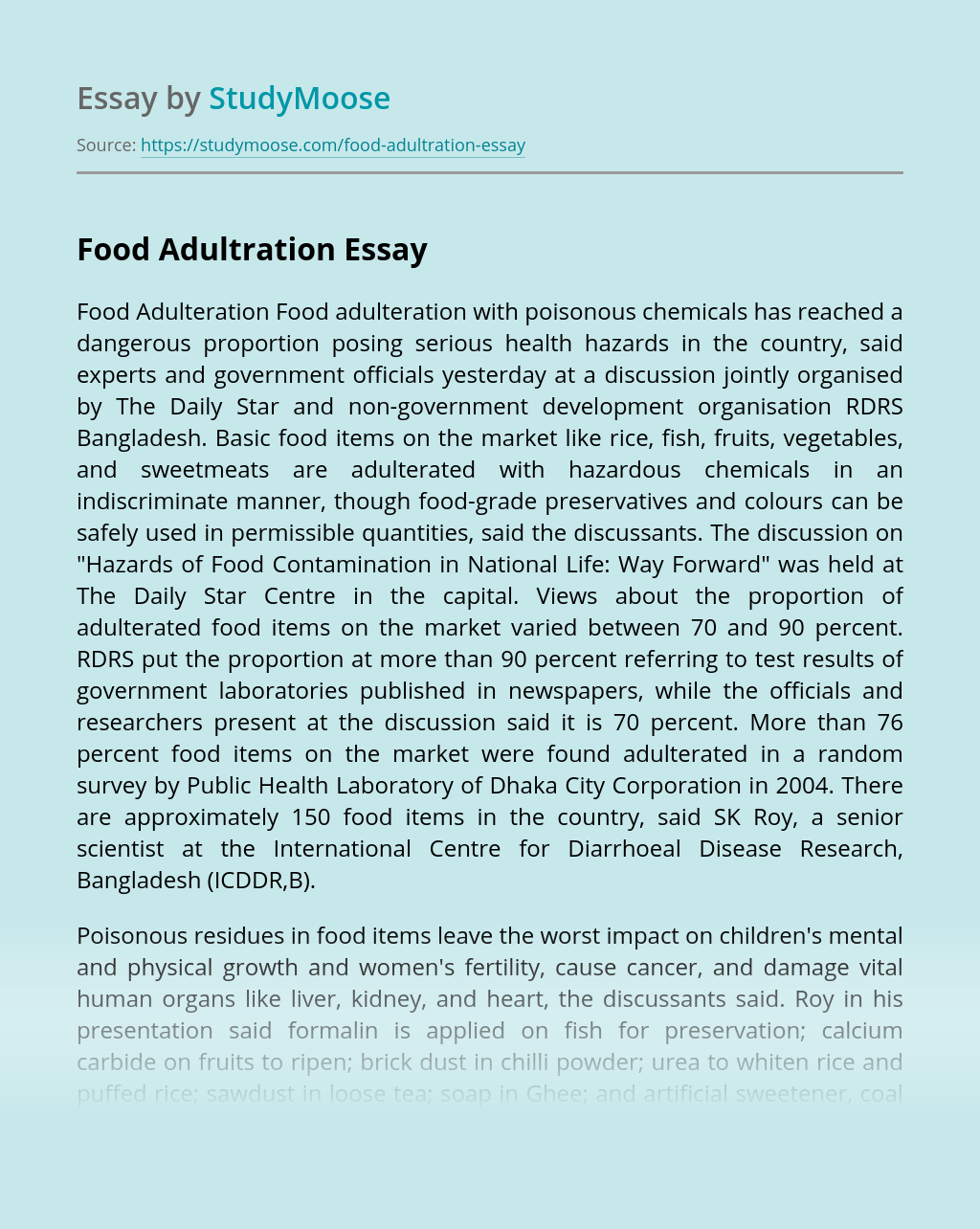 Why Is Visual Literacy Important

We can look at images and we are allowed to see and interpret and self-define what the image is. The image can be a drawing a photograph or even a textual display with a color background. We see these images on an everyday basis and at times we just take them for granted. What we... VIEW ESSAY

Song of Myself is a poem of bold declarations that egotistically assert Walt Whitman’s place and purpose in the context of a world of immense scope and romantically instilled vigor. And yet located within this chaotic unfurling of identity there is one piece of the poem that stands out as a conspicuously reserved, reflective fragment.... VIEW ESSAY

Benjamin Bloom developed Bloom’s Taxonomy in 1956. It identifies three domains: cognitive, affective, and psychomotor; utilized to evaluate knowledge adapted by the learner. Each domain has categories that measure the level of the learners understanding. This paper gives a brief overview of each domain and explains how Bloom’s taxonomy applies to education and its use... VIEW ESSAY

Distinguish between the following: a) Industry demand and Firm (Company) demand, b) Short-run demand and Long run demand, and c) Durable goods’ demand and Non-durable goods demand. 2 . What are the problems faced in determining the demand for a durable good? Illustrate with example of demand for households refrigerator or television set. 3 .... VIEW ESSAY