Focusing on the Environment : The Ban on Plastic Bags

At the begining of this year, China proposed a ban on all plastic bag to be in place by June. The Australia’s Federal Environmen Minister Peter Garret followed suit and wanted a similar ban in Australia by the end of thsi year. He planned to have this legislated so that the ban could be legitimate. This propsal has been received by mixed reaction from all interested stake holder in the retail segment. (Australia Retailers Association a, 2008, p.

Don't use plagiarized sources. Get your custom essay on
“ Focusing on the Environment : The Ban on Plastic Bags ”
Get custom paper
NEW! smart matching with writer

One of the stake holder who have been against this move are the Australian Retail Association (ARA). They have been very categorical that this move is simply “populist emotional rherotic.” They seen no point in putting up this policy as it will mean that those retailers who still wish to use the plastic bags will have to pass  several times of levy to the consumers. The net effect is that the prices of the basic commodities will shoot up.

As it is, the consumers are already under siege from the level of interest rates and the fuel prices. (Australia Retailers Association a, 2008, p. 1).

ARA is particularly concerned that they were not consulted before the decision was made. This is in the backdrop of media allegation about the effects of plastic bags. ARA asserted that they have been waiting for the wider meeting with the Minister and other key player but this was not honoured by the government in March. Certain media sentiments and comments to the effects that the plastic bags are scientifically and environmentally unsound have been dismissed by ARA as false and poorly researched.

This debate has also gone abroad to fellow commonwealth countries Britain where a newspaper supported the general use of plastic bag, and cited the some sea animals as the only ones that are under threat and not man as has been implied by some quotas of the research. (Australia Retailers Association a 1); (The Australian , 2008, Online).

ARA proposes that there should be no outright banning of plastic bags or implementation of legislation that would increase commodity packaging levy. They are however committed to the reduction of products that pollute the environment. ARA is aware that either way the customers will foot the bill. They feel that the debate should go several notes lower on emotional factors and climb higher on the economic advantages. It is note worthy that retailer have been putting in alot of effort towards environmetal conservation. (Australia Retailers Association a, 2008,p. 1).

Towards that end, the retailer have been very cooperative in the section of compliance such as the microns of the plastic bags. They have also been cutting down on the use of plastic bags at the supermarkets which stands at  about 50% as of 2007. So, ARA is of the strong opinion that the main issues have been diverted and replaced by minor one. They stress that plastic waste management rather than plastic bag production and use should be the focus of the government and other like minded organization. This can be done by making the customers more aware of the ways of disposing off waste plastic bags. (Australia Retailers Association a, 2008, p. 1).

ARA is also ponting out that the proposed legislation will be merely a lame duck as a shift from the plastic bags usage or even the policing of the banned category will not work out. They have noted that there is not main remedy at the moment. If the government is thinking about the step back to paper bags, then they should be ready to confront the more emotive issue of global warming when these are being incinerated. In essense there is not point is solving one problem only to cause a bigger one. (Australia Retailers Association a , 2008, p. 2).

Therefore ARA is calling for bold idea leadership that is backed by facts rather that making statements for the sake of making the government look popular. In fact, the last few years have seen the retailers taking avery active lead on this matter until when the government came in , hijacked the agenda and started issuing uninformed policy statements. (Australia Retailers Association a, 2008, p. 2).

ARA is taking this position on the support of its 1.2 million affiliated workers who generate over AU $ 295 billion per annum. They are also defending the Workplace Relations Act and are fronted by a range of business and education policy minded organizations. Their current concerns have seen the moves by the Productivity Commission  imposing hefty taxes and indiscriminate bans on the plastic bags. This has cost the economy more than AU $ 1 billion. (Australia Retailers Association a , 2008, p. 2).

ARA is also keen to alert the consumers that they need to resist the governments move to ban the plastic bags as they will bear the final cost shocks. They are warning that the government’s speedy knee jack reaction to China’s call for ban, is more of their feeling of trade threats than just environmental issues. As thing stand, if the government goes ahead with the ban, then the cost of goods will go up and China will have an even better advantage of exporting their cheap products to Australia to the detriment of the Australian workers. The government’s view that the legislation will spare the planet of pollution effect is out of times. (ABC News , 2008, Online)

ARA is for example wondering what the government is having as an alternative for the laundry services and drycleaning. Therefore the focus should be on manufacturing more biodegradable plastic bags. More so, the government must come up with some reasonable alternatives, which they have not done, yet they are planning to start a phaseout plan by April 2008. (ABC News , 2008,  Online)

ARA has in the past been actively involved in the solution process of the plastic bags usage in Australia. This has been in their agreemant that the marine life and land need to be conserved. To this end they have been coming up with policies that help to cut down usage of plastic bags as well as setting up recycling policies. They have a code of practice that will be used for the regulation and recycling of the High Density Polyethylene plastics (HDPE). This was drafted with the consultation of all the stake holders. (Australia Retailers Association b, 2006, p.  4).

ARA has also been active in campaigns that are against the massive use of plastic bags. These have adopted some strategic slogans that are workable with the retailers as well as create awareness via a website. ARA takes into considertion that plastic bags cause over 2% of waste in the environment. They encourage the citizens to recylce the usage of the plastic paper bags so that less than 1% are disposed off. ARA have also credited the plastic bags for their role in landfill as well as for their portability after shopping. (Australia Retailers Association b, 2006, p.  5).

ARA is not against the ban of policies that advocate for environmental protection passe, so long as they give workable alternatives. They would not like to see the plastic bags industries close down or relocate to more strategic countries. This will impact on the workers job security negatively. They would also like to encousrage the consumers not to litter the drainages and other areas with the plastic bags. (Australia Retailers Association b , 2006, p. 5).

ARA has at the moment put up two recommendations for the issue of plastic bags. First, they strongly propose that an alternative must be put in place if the government is keen about implementing the plastic bag ban. This will not leave the retailers without an option for porting their goods. But this replacement must have the consumer affordability at heart as well as be safer than the current options. The alternative packaging must also be less destructive to the land issues and pose less littering. This calls for them to be recyclable and easy to produce. They must be resusable and all these points have not been stisfied yet. (Australia Retailers Association b, 2006, p. 6).

The second main point that ARA has been advocating for is the voluntary cut back of the plastic bag use. They prefer that the customers are educated and informed on the potential benefits and effects of use of the bags. This sort of campaign will need to target other main stake holder so that all are reading from the same script in understandable languages. This campaign also need to have the  government input so that goodwill is felt. Thereafter, a combined input of laws that deter littering that are accompnied by fines should be put in place.(Australia Retailers Association b, 2006, p. 6).

Slogans of blanket bans and face out may be in fasion with the governments but these must be well presented and researched. The government must be keen to carry out a comprehensive cost benefit analysis before they come up with such policies. Some costs that they need to checked are those of the ban administration, customer retail costs and cost of strict litter regulations. Therefore ARA will endevor to proctect the interest of the people at large as well as those of its stake holders. (Australia Retailers Association b, 2006, p. 7).

Focusing on the Environment : The Ban on Plastic Bags. (2020, Jun 02). Retrieved from https://studymoose.com/focusing-on-the-environment-the-ban-on-plastic-bags-new-essay 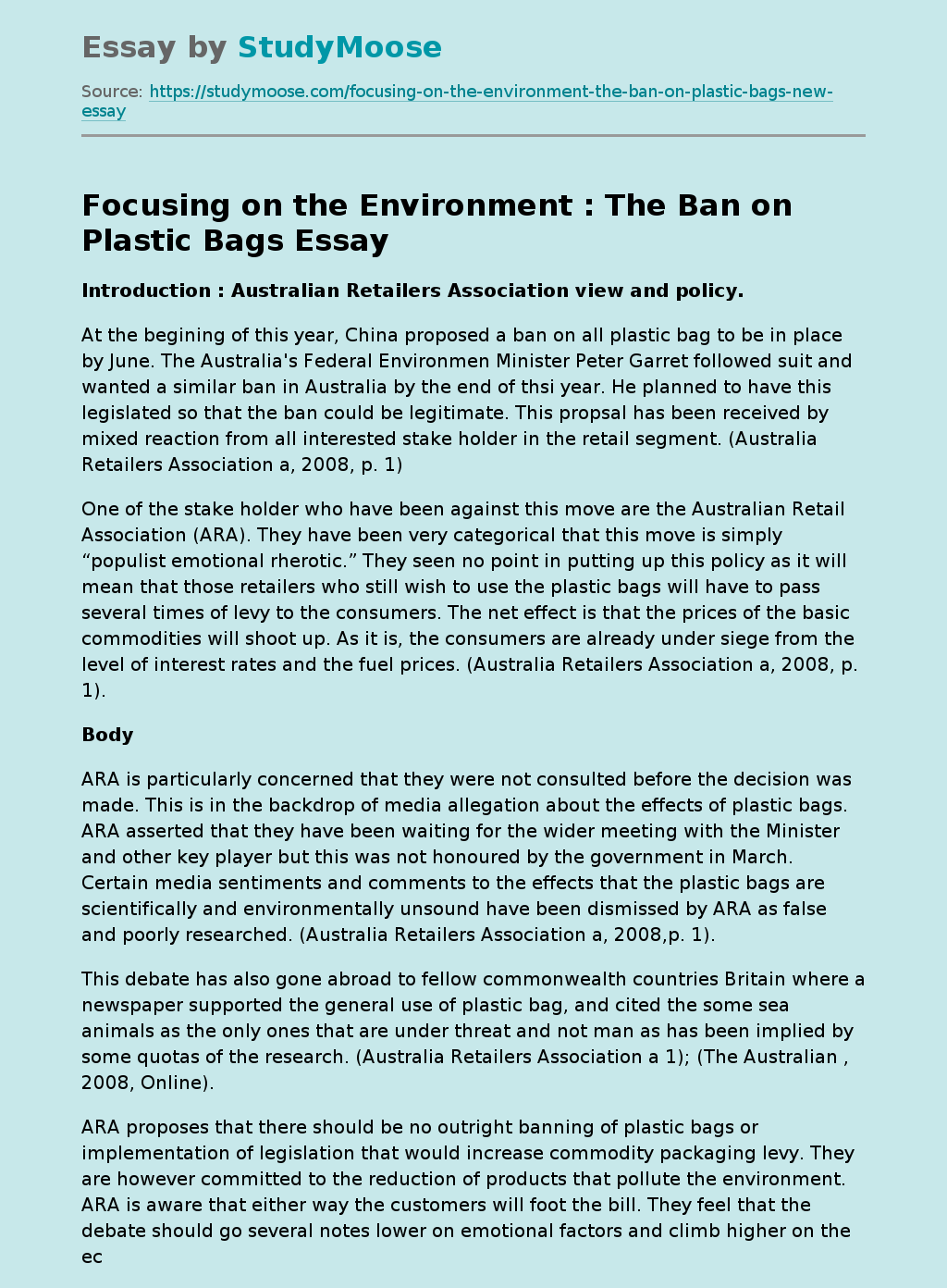