There are many issues that are arising in the United States. These issues seem to catch media attention but they are publicized so much that teens believe it is all in fun. They don’t understand that doing drugs does not lead to fun partying. Becoming a dealer is not a quick way to cash it’s a quick way to death. Committing suicide does not make everything easier. The only person you took the pain away from was yourself. The media captures all these fun moments that people do with only a little bit of the bad.

Teenager’s girls see all these other girls on T.V raising a baby and they think “hey I can do that.” Then reality kicks in and it is nothing like how it was on T.V. There are many issues among teens in the United States, but the focus on this paper is going to be following teenage pregnancy.

In today’s society when someone hears that a young girl is pregnant they automatically think she was sleeping around.

Teenagers often feel pressure to make friends and fit in. Many times these teens let their friends influence their decision to have sex even when they do not fully understand the consequences. Teenagers have sex as a way to appear cool and to fit in, but in some cases the end result is an unplanned teen pregnancy. According to the Kaiser Family Foundation states that more than 29 percent of pregnant teens reported that they felt pressured to have sex, and 33 percent of pregnant teens stated that they felt that they were not ready for a sexual relationship, but proceeded anyway. When peer pressure is involved to have sex that usually means that drinking is involved as well. Underage drinking is another cause that leads to teenage pregnancy. Teen drinking can cause an unexpected pregnancy, according to the website Love to Know. Many teens experiment with drugs and alcohol. Drinking lowers a teen’s ability to control her impulses, contributing to 75 percent of pregnancies that occur between the ages 14 and 21. Approximately 91 percent of pregnant teens reported that although they were drinking at the time, they did not originally plan to have sex when they conceived. Peer pressure and underage drinking go hand in hand with teenage pregnancies.

One leads to another which causes an unexpected pregnancy. Out of the other three causes glamorizing teenage pregnancy and lack of knowledge also go together. The movie industry and the media contribute to teenage pregnancy by glamorizing teen pregnancy in movies. Movies that show teen pregnancy as something to be desired encourage teens to engage in reckless sexual activity, according to ABC’s “Good Morning America.” During adolescence, teens become more focused on their appearance and how people view them. Teens see on T.V that there same age are having cute little babies so they go out and have sex without being fully educated in what that really is. Teenagers who are uneducated about sex are more likely to have an unintended pregnancy. Some teens do not fully understand the biological and emotional aspects associated with having sex, according to DailyRecord.co.uk. Many times, teens do not have the knowledge needed to make informed and responsible decisions about whether or not to engage in sexual activity that can alter their life. Social media is not helping teenage pregnancy it is only causing young girls to go out and try it. The last and final cause for teenage pregnancy is rape. Teens can become pregnant as a result of sexual abuse or rape.

The Guttmacher Institute states that between 43 and 62 percent of teens acknowledge that they were impregnated by an adult male, and two-thirds report that their babies’ fathers are as old as 27. Approximately 5 percent of all teen births are the result of a rape. People in society need to realize that teenage pregnancy is a big issue today. Many of these young girls don’t finish high school. Teen pregnancy greatly affects education. Only 51% of teen moms have a high school diploma. The number for those who didn’t have a teen birth is closer to 89%. Parenthood is the leading cause for teen girls dropping out of school. Teen moms are extremely unlikely to go to college. Only about 2% of young teen moms ever get a higher education degree. Statistics show that In the United States, there are nearly 750,000 teen pregnancies each year, that’s about 2000 a day! . It’s estimated that about half of Latina and African American teenagers will be pregnant at least once before they’re 20.Raising a baby can cost up to $10,000 in the first year alone. About 80% of teen fathers don’t marry the mom. They also contribute very little to raising the baby. On average, teen dads pay less than $800 a year on child support.

Teenage pregnancy is an issue just like drug use and alcohol abuse that needs to be looked into. There is no way to stop teenage pregnancy. Talking to teens about it is not going to stop them when they are at a party and alcohol is involved. Instead contraception’s should be provided in public bathrooms, schools and encouraged to be available at home. Many believe that providing protection in schools will only encourage teens to have sex. Reality is they are going to have it whether there is protection or not, so why not provide them the right choice of using protection. Maybe if protection is provided there will be less unexpected pregnancies in the United States. 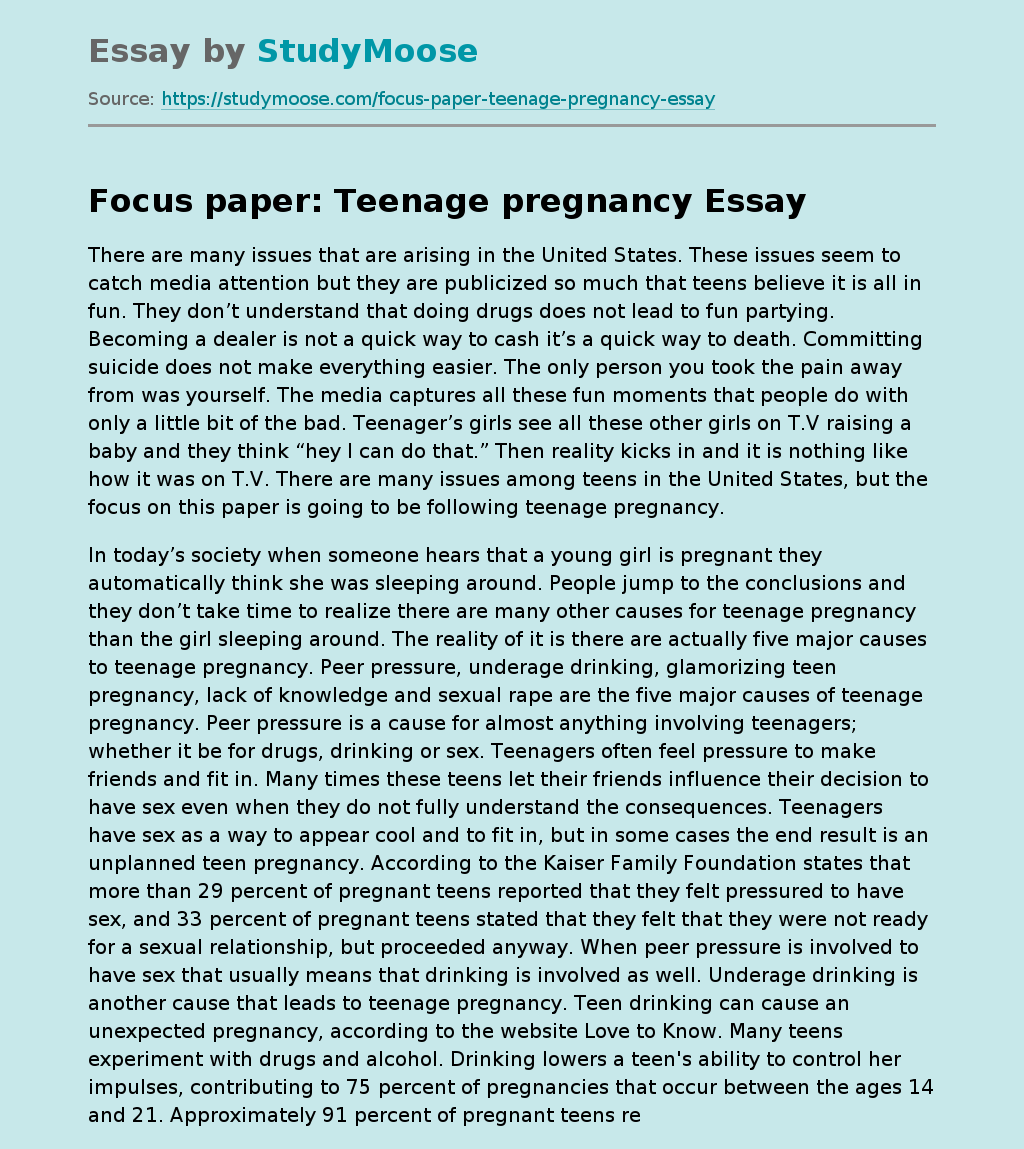