FM TRANSMITTER Group membersSyed Talha Mairaj : ID 9457Adeel Ahmed : ID 9480Department of Electrical EngineeringPAF-KIET, Karachi ABSTRACT: FM transmitter is an efficient way to transmit audio signal through wide range and quickly. INTRODUCTION:The FM transmitter is a transistor circuit. The frequency modular (FM) transfer the information by varying the frequency of carrier wave according to the message signal. Usually, the FM transmitter uses(Very High Frequency) radio frequencies of the range is 87.5 to 108.0 MHz to transmit and receive the FM signal.

There are three types of modulations.Amplitude modulation.AM signal changes the amplitude of the carrier wave without changing its frequency phase. Frequency modulation.It changes the frequency of the carrier wave without changing the amplitude or phase.Phase modulation. PM signals changes the phase of the carrier wave without changing other two parameters. DESCRIPTION: It is used to send information over a long distance and quickly , after various attempts have been made both for the sender (or the source) and the receiver (or the destination) these attempt have include those of the town cariers and their local drums from the beginning of human history then the wired telephone in the (1840s) and some decades later at the dawn of the 21st century the use of radio waves in the wireless communication system.

Through fm transmitter the human voice to be sent to great distances by using the carrier wave at a modulated frequencies of 87.5 ” 108MHZ and received on a suitable FM receiver..The frequency modulation transmitter is an electromagnetic circuit designed with input and output transducer which amplify, and transmit audio signals to the receiver’s destination.The FM transmitter modulates a carrier wave by intelligence and radiates the modulated signals through an antenna and demodulates it to obtain original intelligence COMPONENT:This project we are used simple component: BJT transistor (2N222). Resistor are different values 1k,10k , 100k , 1M 3.5 mm Audio Jack 8-10″ inches tall antena 20pf variable,4.7pf, 0.01uf, 0.1uf . inductor of (0.1uH) 9V Battery VERO BOARD. Connecting wire. mic for testing 9 Voltage battery use. WORKING (Method):FM transmitter use the audio from your portable MP3 player to create a station.The mechanism of a radio transmitter working depend on an oscillation is produce carries signals on a little bit frequencies. The little bit signal need are controlled, than voltage modular is used too. The (FM)frequency Modulation signals than the transmitted into the outer most space throughout an a antena.A audio outsight signals from mic is usually very smaller than others, the first transistor is use for amplifying that signal to a level is very good for transmission. After a while amplification as described earlier, the next stages of the FM(Frequency modular) transmitter is modulation. At that stage the amplified audio signal is then mixed with the wave carrier frequencies at with which the signal is to be transmitted. This carrier frequency can be vary using the 20PF variable capacitor connected with the inductor, and the frequency band of this design is between the 87.5MHZ to 108MHZ ,hence there is no visual output to recognizing the exact frequencies at which the transmitter is working, (FM) receiver radio within the range of the frequencies mentioned to get the frequency at which the transmitter is transmitting. After modulating the Audio signal with the carrier frequency, the signal is then sent out through the antenna.BLOCK DIAGRAM: CIRCUIT DIAGRAM: RESULT:The results are performs for every small output of the circuit in the FM transmitter.We can analyze the performance of the actual circuit practically and the achievements of this project. CONCLUSION:Through this project, we have now seen an exact application of our lessons such as Wireless communication, FM modulation, transmission, demodulation, reception, and also oscillators, amplifiers, and more.Being able to transmit and receive information by means of wireless FM communication is indeed fascinating. FUTURE WORKIn future work for this project we can use as a woki toki for comunication. 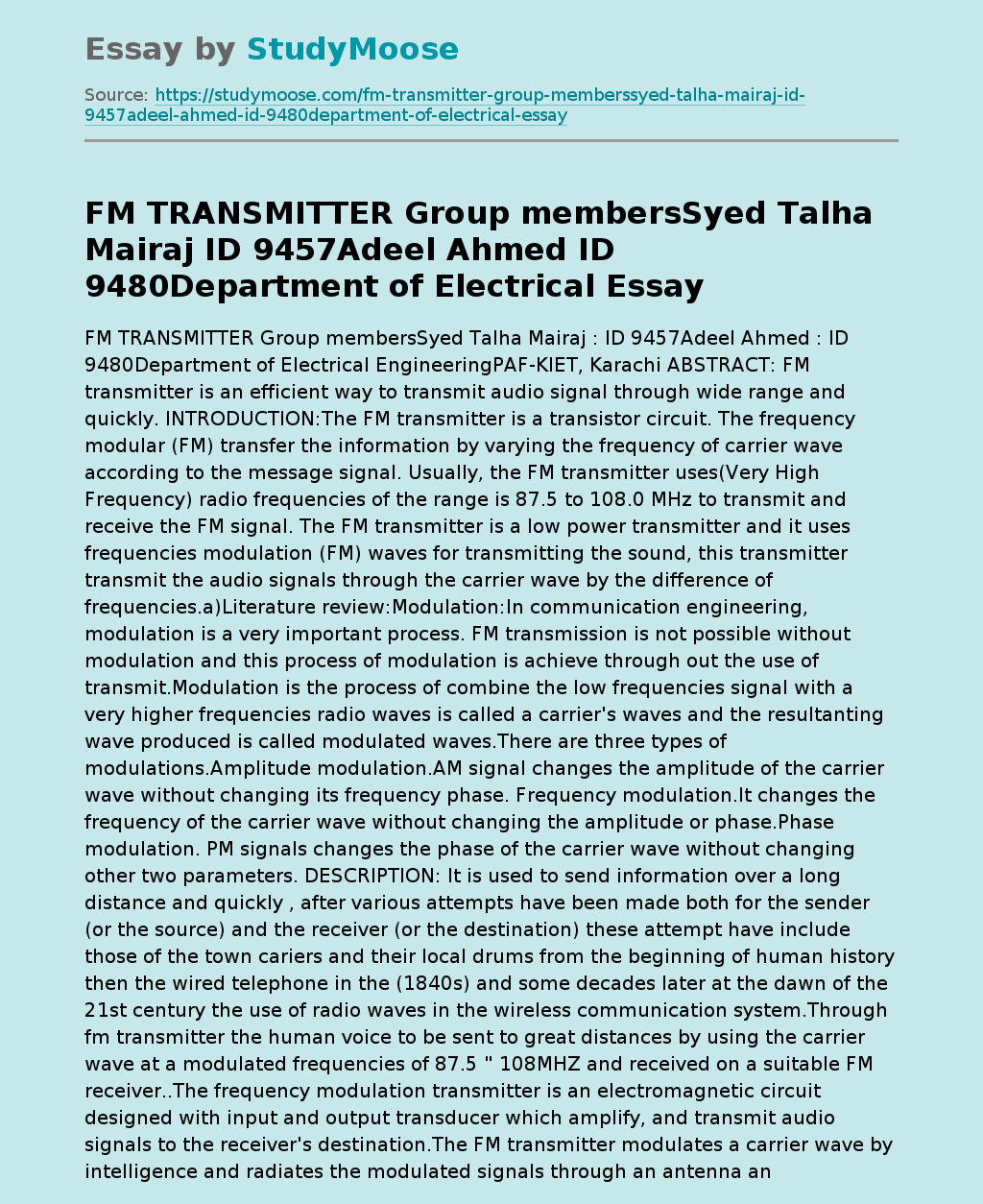