"Flowers for Algernon" by Daniel Keyes

This paper discusses the idea of intelligence operations as carried out in Daniel Keyes, “Flowers for Algernon”

Medical operations are carried out everyday, but for some, an operation can change a person’s life. One experiment was done on a mentally retarded person to try to raise his intelligence. The experiment worked, but after months, the patient regressed dramatically. In the book, Flowers for Algernon, by Daniel Keyes, this intelligence operation was preformed, and the patient was Charlie Gordon. After the operation, Charlie was very bright, but experienced psychological traumas, loneliness, disillusionment, and social inadequacies.

Don't use plagiarized sources. Get your custom essay on
“ “Flowers for Algernon” by Daniel Keyes ”
Get custom paper
NEW! smart matching with writer

Charlie’s psychological traumas or emotional upset was caused by his memory recalls. After his operation, he remembered every aspect of his childhood, whether it was good or bad. “…He’s normal! He’s normal! He’ll grow up like other people. Better than others…”

Charlie had dreams of how his mother was ashamed of him. His mother always thought her son was normal and would grow up and be somebody.

“…He’s like a baby. He can’t play Monopoly or checkers or anything. I won’t play with him anymore…” Charlie’s sister also ignored him. To her, Charlie was dumb and could not do anything. Charlie had dreams of his sister yelling at him and making fun of him. He also had memories of the night his parents took him to the Warren Home. He was terrified and his dad would never answer his questions. Charlie remembered his childhood and through his memories, he felt guilty for hurting his family.

After the operation, Charlie also suffered from disillusionment. In the bakery he used to have friends. Friends that would talk to him and care about him. “…Why? Because all of the sudden your a bigshot. You think you are better than the rest of us…”

Charlie then realized that he had no friends but merely knew people that made fun of him. The bakery employees just liked him because they could blame their mistakes on Charlie. Then, they could not do this after the operation, so they all turned against Charlie. “…I had to find out just how much they knew. I found out. Nothing…” “Both frauds” Charlie also found out about Nemur and Strauss. He realized they were not professionals, but two men that were taking a shot in the dark. Charlie felt like an expendable lab specimen. Thus, Charlie had lost his friends and knew now he was just a like a lab rat. Charlie had lacked faith in his fellow man. “…Thoughts of suicide to stop it all while I am still in control…” Everyday Charlie lost a piece of himself. He was starting to regress and thought about suicide to end his up and down life. He became irritable and edgy around people at the university. He would become mad at people very quickly and then yell at them. His self-centered and arrogant personality was a symptom of his regression. People stayed away from him because he was becoming a madman and was unpredictable.

Because of this, Charlie became lonely in his last weeks before he regressed totally. “…Intelligence without the ability to give and receive affection can lead to a mental breakdown…” Charlie experienced social inadequacies while he was intelligent. “…You know as well as I do, you don’t need to work here anymore…” Charlie lost his job because he was to smart to work in a bakery. He could not socially interact with people he worked with and the people he met. Also, Charlie could not perform with Alice or Fay. “…I saw him watching me with his eyes wide open. I couldn’t do it…” He experienced illusions when he tried to make love with Alice.

The “Charlie” inside of himself emerged and started to regain control of his mind. All in all, Charlie suffered from the pain of not knowing how to deal with his peers and decisions. Therefore, after the operation, Charlie became a smart man but he had to pay the price for it. He had psychological traumas, suffered from loneliness and illusions, and did not know how to act with his peers. Charlie regressed and finally went to the Warren Home, but he at least experienced the world through normal eyes. On the other hand, Charlie might of been better off without the experiment. He would still have friends and a job, but most important of all, he would have a life.

"Flowers for Algernon" by Daniel Keyes. (2020, Jun 02). Retrieved from http://studymoose.com/flowers-for-algernon-by-daniel-keyes-essay 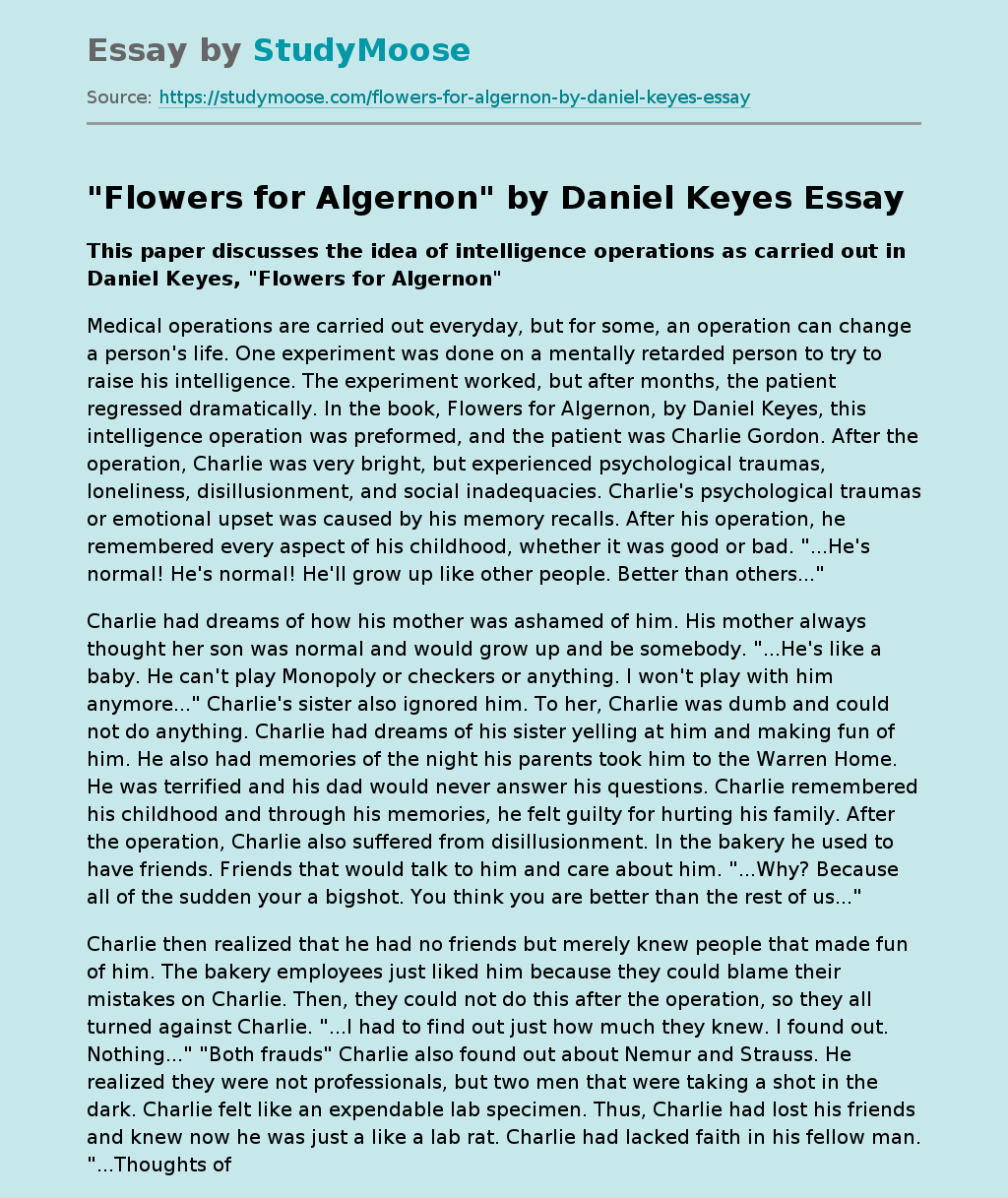