Writer: Linber LewisSchool: President’s College, GuyanaIf one asks the question, what can floods do?, then the following may seem like fitting answers. During the summer monsoon season, heavy rains cause destructive floods in Southeast Asia. In China, the floods of the Huang He River have been so frequent and devastating that the river is called Chinas Sorrow. Likewise in the US, record spring and summer rains in 1993 caused the Mississippi Rover to overflow its banks, flooding farms and towns from North Dakota to Missouri, causing 10 billion dollars in damages and leaving 70, 000 homeless.

Don't use plagiarized sources. Get your custom essay on
“ Floods – A literature review ”
Get custom paper
NEW! smart matching with writer

These extracts attest to the destructive nature of floods. By contrast, Britannica Encyclopedia tells us that the success of the Egyptian Civilization was heavily dependent on the annual flooding of the Nile to replenish soil moisture and fertility, and also to supply to irrigation water.

Research shows that domestic animals seem to suffer greatly during conditions of excess water. According to the book, Where there is no Vet; the infectious disease foot rot that attacks the hooves of animals, is prevalent during wet weather and in wet areas. It is known that floods bring a sharp increase in insect population. Consequently animals suffer from skin and eye irritations due to these insects. According to the Government Information Agency (GINA), during the 2005 flood, more than 2000 animals were treated during the early stages of the floods.

They were treated for worms, diarrhea, nutritional deficiency, and respiratory and skin problems.

The shortage of food had also affected animals. GINA also stated that feed and molasses were distributed. According to a Stabroek news article dated 05/02/16, farmers at Enterprise on the East Coast of Demerara had to place in excess of 1000 cattle on mud dams. In addition, many were stranded in flooded area, or stuck in mud. Many of these animals drowned due to cramps. Deaths of livestock were prevalent among cattle, swine, sheep and goat due to abortion or pregnancy complications. Animals on mud dams also fought amongst themselves resulting in many injuries that often resulted in death. Ducks enjoyed the water but were made to prey to caimans. Other poultry sought refuge on roof tops.

With regards to crops, information garnered from Biological Science 1 tells that terrestrial crops will not fare well during or soon after a flood, since excess water causes water logging that result in:Clogged air spaces leading to death of microorganisms in soil.

Rotting of plan roots due to excess water.

Leaching (washing away) of soil nutrients.

A change in the pH of acidic soils.

Surprisingly, Microsoft Encarta tells us that some varieties of rice grow with roots submerged in water, and that these varieties are more productive because their roots easily extract needed nutrients from water. But once rice starts to mature, water is drained or pumped out of fields since a dry field is needed for plants to mature and grains to ripen.

In the same news article previously referred to rice, rice farmers in Enterprise lost over 300 acres of rice since the ripening grains were damaged by the excess water.

However, when one looks at the response of the ecosystem to floods, the revelations that spring froth tell a different story. According to Nature Encyclopedia; most amphibians lead solitary lives, but for many species the need for water in which to mate, brings large numbers together at breeding pools. This exodus is dependent on factors such as daylength, temperature change and most importantly weather. The annoying croaking of male frogs to get the attention of a female occurs more frequently during the rainy season. Hence the rains (a likely cause of a flood) created an optimum condition for amphibian reproduction.

The Nature Encyclopedia also tells us that some fishes take physical steps to protect their offspring and thus build nests. The hassar nests, very common during rainy seasons are evidence that fishes also multiply in excess water. The sharp increases in mosquitoes during and after flood are due to the fact that their larvae mature in stagnant water.

When an area is flooded, aquatic plants spread in the stop the flow of water and trap silt. Silt greatly aids in bringing more vegetation (such as reeds, lilies and grasses) to the flooded area.

But a deluge can also have negative impacts on the natural ecosystems. An example given in the Nature Encyclopedia is the delay ion completion of metamorphosis in frogs. Tadpoles lose their gill for lungs, and lose their tail for legs provided that conditions are right, on their way to becoming mature frogs. But if environment is swamped, then the maturing frog will continue to grow but retain their gills and tails for longer periods in order to adapt to their surroundings. This delay in maturity means a longer elapse before reproduction. If this happens in large numbers (extreme cases) the frog population can be affected. 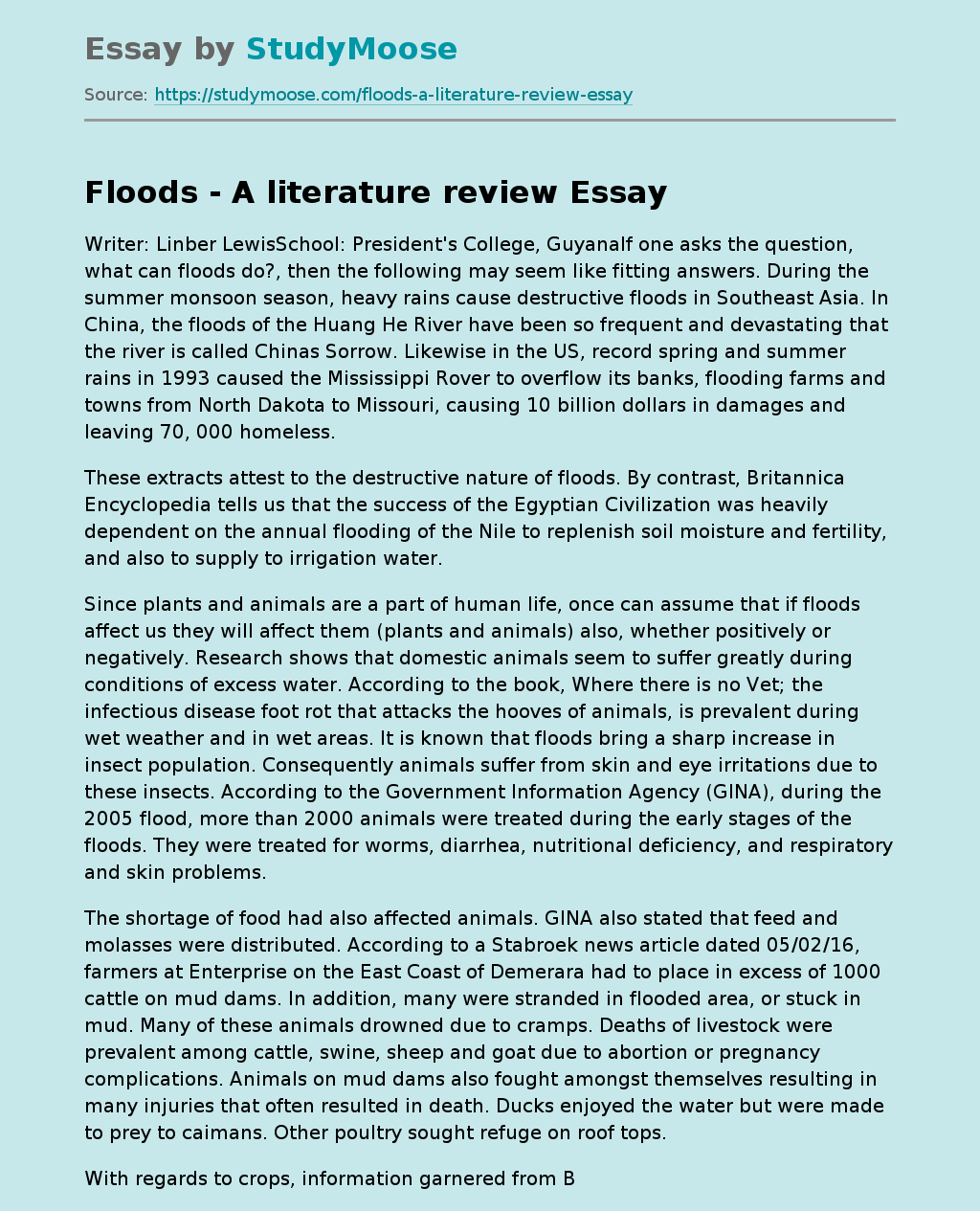