FCB obtained listing in Bursa Malaysia on the 15 September 2001. The main core business was to provide air freight transportation within the Asian region. As a fast growing company, FCB secured agreements from well-establish company within the transportation industry such as Worldwide Express, United Parcel Services (UPS), Nationwide Express, City link and others. Issue on FCB

1) The auditors were unable to verify the aircrafts claimed have been purchased by FCB in 2005. The audit team found a non-functional rundown aircraft barely worth 231 million in a hangar.

Don't use plagiarized sources. Get your custom essay on
“ Flat Cargo Berhad ”
Get custom paper
NEW! smart matching with writer

Aircrafts that was claimed have been purchased are categorize as an asset for FCB. It’s because the business nature in providing delivering transportation services to customer that generate income for the company. But acquired an asset must be recorded through legal transaction and within controlled of the company.

These items are expected to be used in future activities that will generate cash inflows to the company. From the financial statement in 2005, the account equipment, at cost of the aircrafts acquired is increased and cash decreased for the same amount.

But, failing to verify the legal amount of purchased assets, we consider the expenditure was not happening and the amount of fixed asset was overstated and the cash was understated in the balance sheet. Non-functional aircraft barely worth 231 million in the hangar were a huge asset for FCB that within their control.

We consider all the aircrafts have a diminished value for future periods, this asset should restate to its new estimated recoverable value and the amount of the write-off becomes an expense for the year 2005.

An expense represents resources consumed by the FCB earning activities. All the non-functional aircraft supposedly reduce retained earnings for FCB. If the recoverable value is estimated 231 million, expense amount increased for 231 million and retained earning reduce that same amount as well.

2) The audit report found that there was a large sum of sales transactions was found with no supporting documents. Most of these transactions involved small clients. We noticed that the revenue in 2005 was approximately 5 times higher comparing to 2001 until 2004. Changes amount in revenue will affecting the net income as well. The major issue is failing to comply with the basic recognition of revenue according to FASB standard and obey both the conservatism concept and realization concept.

Other issue was the FCB management feel that record transaction involving small clients were insignificant to show true and fair view in the financial statement because it is not materialize compare to others event. According to conservatism concept, we should recognize revenue only when they are reasonably certain. In this case, without the supporting document on sale there are possibilities the auditor couldn’t verify when the revenue should be recognize. When dealing with measurement uncertainties, the management should disclose numbers that have valid documents that represents true and fair view in the financial statement.

In this case, certainly the amount on revenue against the realization concept because there are no sales without proper documentation provided. So the amounts of sales not reasonably realize. According to FASB, revenue should be recognized in the earliest period in which the entity has substantially performed what is required in order to earn income and the amount can be reliably measured. In this case, there are contingencies associated with the transaction of sale that have not been resolved by the management that against the basic concept of recognition of revenue. The revenue is not been ‘earn’ by FCB because lack of sale evidence documentation.

Similar to FASB, the IFRS address, sales only recognize when the seller has transferred to the buyer the significant risks and rewards of ownership of the services. Without documentation between FCB and its fictitious buyers, we assumed the sale did not happen. Parallel to the above issue, the account department does not attempt to record small transaction clients because maybe the work recording them is not justified by the usefulness of the results.

Even though there is no agreement on the exact line separating material events from immaterial events, producing relevant document regarding selling or buying activities can result better judgement to disclose true and fair view in the financial statement. In sum, the materiality concept states that insignificant events may be disregarded, but there must be full disclosure of all important information. In this case, the management fail to provide document that involved large sum of sales during the auditing work in progress.

3) Several abnormal transactions involving the purchase of aircrafts by FCB and offsetting the debtors’ account were found in FCB’s book.

When the expenditure is made, the related cost is either an asset or an expense. Purchasing an aircrafts is an asset because the cost benefits future period for the company. But when the auditor couldn’t verify the purchased asset, maybe the abnormal transaction of the purchased asset was to dissolve bad debts from debtors account. To generate revenue, FCB sale service to customer on credit. It may be involved single payment or series of payment. Consider several customers do not pay the services, therefore it will increase bad debts situation.

RAM rate FCB’s 150million Commercial Papers or Medium Term Notes to AA3/P1 and downgraded the company’s long term rating from stable to negative. The rating was due to the company’s high gearing ratio and weak debt servicing ability. This founding related to abnormal transaction involving purchased aircrafts and offsetting debtors’ account through accounting recognition of bad debts using the allowance method. The total amount of uncollectable accounts was estimated. The most common method is to estimated bad debts expenses as a percentage of credit sales.

The percentage determined by the management base on the past experience. The right account to use in the balance sheet is to contra asset account for Accounts Receivable is called Allowance for Doubtful Accounts. The allowance for doubtful accounts should be sufficient at all time to absorb the accounts that prove to be uncollectible. The management should prepare an aging schedule to give better estimation of bad debts that result true and fair view on the Accounts Receivable. 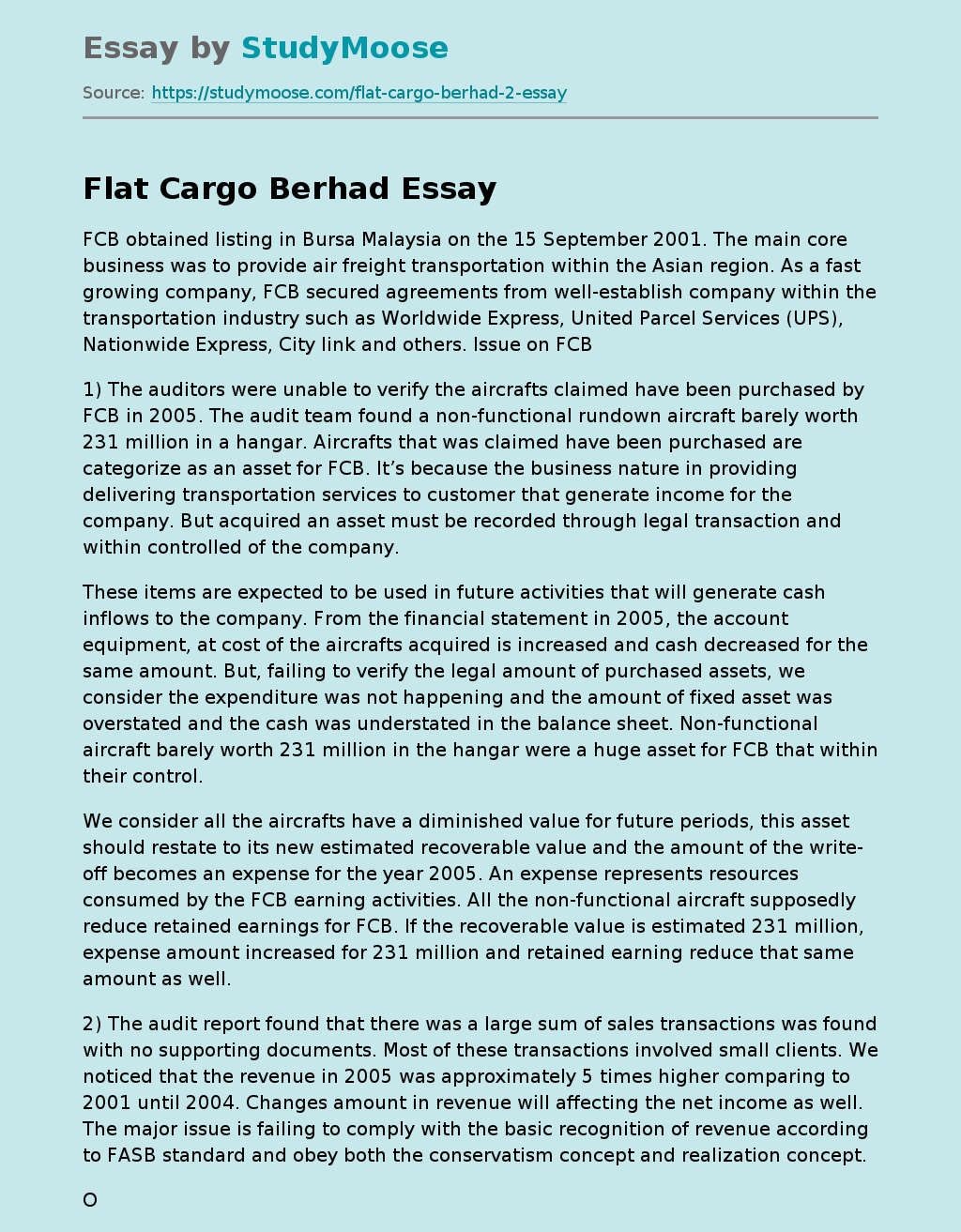