On the 7th of January 1792 Christopher Columbus set sail from Spain under instruction from the King and Queen to find a westerly sea crossing direct to Asia. Of this journey there were several items of literature written to which made account of the journey that still remain today. After reading two different pieces which offer different accounts from different men, a diary written by Las Casas a crewmen on the voyage, which was composed after the expedition, and a letter, to the King and Queen of Spain written by Columbus himself at the time of the voyage.

Don't use plagiarized sources. Get your custom essay on
“ First Voyage of Christopher Columbus ”
Get custom paper
NEW! smart matching with writer

These two items allow for a great insight the initial reactions between the two cultures, and also an insight into the Spanish mind on that fateful day in October 1492. First it must be noticed that there are many strengths and weaknesses to both the items the Letter offers greater credibility, because its a primary source coming directly from Columbus only having been translated from Spanish to English, also the letter was written at the time or shortly after the voyage took place.

This leaves for less chance of the truth being blurred by the passing of time. The Diary, on the other hand, is a secondary source, this mainly because the diary was not written by Columbus himself but by Las Casas. It was also not written at the time of the voyage but sometime after allowing for some of the accounts to be lost to time. This being the case the diaries lack some of the credibility that is available from the letter making it less useful for the purpose of historical recreation.

The pieces also allow you to see and gauge the reactions between the Indians and the Spanish. The reactions were generally positive nature and one of friendship. “these things pleased them greatly and they became marvellously friendly towards us”1. This reaction was almost identical on most of the islands that Columbus visited on his first trip. However it was not the only reaction – “As soon as the inhabitants saw us they ran away, leaving their houses. They hid all they owned in the under growth”2.

I believe that both types of reactions were caused by the same emotion ‘fear’. The islanders that reacted negatively and fled their villages to hide from the Spanish would have been fearful of what the white men in ships were capable of. Also it could be said the villages which reacted in a more positive way and helped the Spanish in whatever way necessary, so that they may not to be harmed by “the men from the skies”3. The reaction from the Spanish towards the natives was pretty much the same, one of friendship, but with ulterior motives.

The Spanish saw the natives as malleable entities, something that they owned, that if they treated them well they would cave to their wants without too much protest, “I know they would be conquered not by force but by friendship”4. The Spanish also thought of the Indians as being people of lesser intelligence “Although the people are very simple and look savage”, “For when I showed them my sword they cut themselves out of ignorance”5.

The articles also shed light upon how the two cultures communicated with each other and showed that it was somewhat farcical. The Spanish believed that they could understand what the Indians were trying to relay to them by interpreting hand signals as well as the native languages that were spoken “To judge by the signs made by the Indians”6, “We understood them to be asking if we came from the skies Come and see the men who have come from the skies; and bring them food and drink”7.

This sort of assumption of what the natives were saying asking or telling them were all too frequent, for all the Spanish knew the Indians could have been completely contradictory to what was thought to have been said, that the Spanish only ‘heard’ what they wanted to hear from the Indians. Another form of communication between the Indians and the Spanish, was the way the Spanish communicated that they meant no harm to the natives at the time of his first landing.

This communication was done not using words but by giving the native presents and leaving them relatively ‘unmolested’ which lead the Indians to a false sense of trust which would inevitably ended badly -“The people gathered around him and appeared astonished. It seemed to him that we were good people and that the man in the canoe must have wronged us or we would not have carried him off”. ” I shall carry him to Fernandina and restore all his possessions to him so that he may give a good account of us. Then when, god willing, your Highnesses send others here, we shall be favourably received and the natives may give us all that they possess”8.

The readings allow us to brief insight into the past and to what values the Spanish held in high regard along with some of their assumptions and world views at the time. It is made quite clear in both the diaries and the letter that the Spanish were devout Christians and believed in all the basic Christian ideals two of these that were made evident in the readings were of Monogamy and Modesty. They also however valued the bigger things such as wealth obtained by gold and spices, new lands and resources to expand their empire.

There were many assumptions made in the readings the main glaring one was that the native peoples would want to convert to the Spanish way of life and the Christian faith “I hope that their highnesses with determine upon their conversion to our holy faith, towards which they are very inclined”9. The letter which was written to the King and Queen gives these great accounts of the Gold and precious metals that could be found on the Island “In this island, there are many spices and great mines of gold and other metals”10.

Columbus makes many references to the discovery of Gold in his letter to the Sovereigns but in reading his diaries we understand that there were never any great amounts of gold found on the first expeditions to the islands other than seeing the small quantities that the Islanders wore as jewellery. Spices in the same vein are mentioned to have been found in abundance on the island also “I believe also that I have found cinnamon and Rhubarb”11 although in his diaries he says of the plants on the island “It grieves me extremely that I cannot identify any of them”12.

Columbus also refers to the Great Khan the leader of the islands who is thought to have an incalculable amount of gold at his possession. He also further goes on to say in the letter that he has formed a strong friendship with the king stating that ” I have established a great friendship with the king of that land, so much so, the he was proud to call me “brother” and treat me as such”13. But in reading his diaries that lasted until the 3rd of November it is noticed that Columbus although he searched tirelessly he never actually succeeded in finding him.

The most probable reasons for there being these extreme inconsistencies between the diaries that were kept by Columbus and the Letter that he wrote to the King and Queen of Spain would lie with the fact he was trying to impress them. The soul reason for his voyage in the first place was to find a direct route to the Asian continent and the lucrative Spice Islands. But clearly with the lack of the islands glamorous gold buildings, thriving market places etc, this was not yet Asia.

So in telling a few white lies such as the exceptional abundance of gold and spices and the fact that he formed a such a strong connection to the Great Khan whom ruled over the new territories and had access to the islands wealth. This would then appease the royals back in Spain and that the time money and utilities afforded to the voyage would not go unrewarded. To lie also benefits Columbus the most because his job would be at stake if the expedition was deemed a failure “Their highnesses can see that I will give them as much gold s they need, if their Highnesses will render my a very slight assistance”. 14

It is easy to see after reading the two pieces that in 1492 the world and what the Spanish knew of the world changed forever. In having read both the diaries that were written by Columbus documenting his first accounts with the people of the Caribbean and also the letter that he also wrote to the King and Queen of Spain it is not hard to notice that there are many inconsistencies with many white lies being told. This journey what was meant to be a simple voyage to find a westerly sea crossing to the Asian continent turned out to be a massive boost for the Spanish but signalled the beginning of the end for the natives of Mesoamerica. 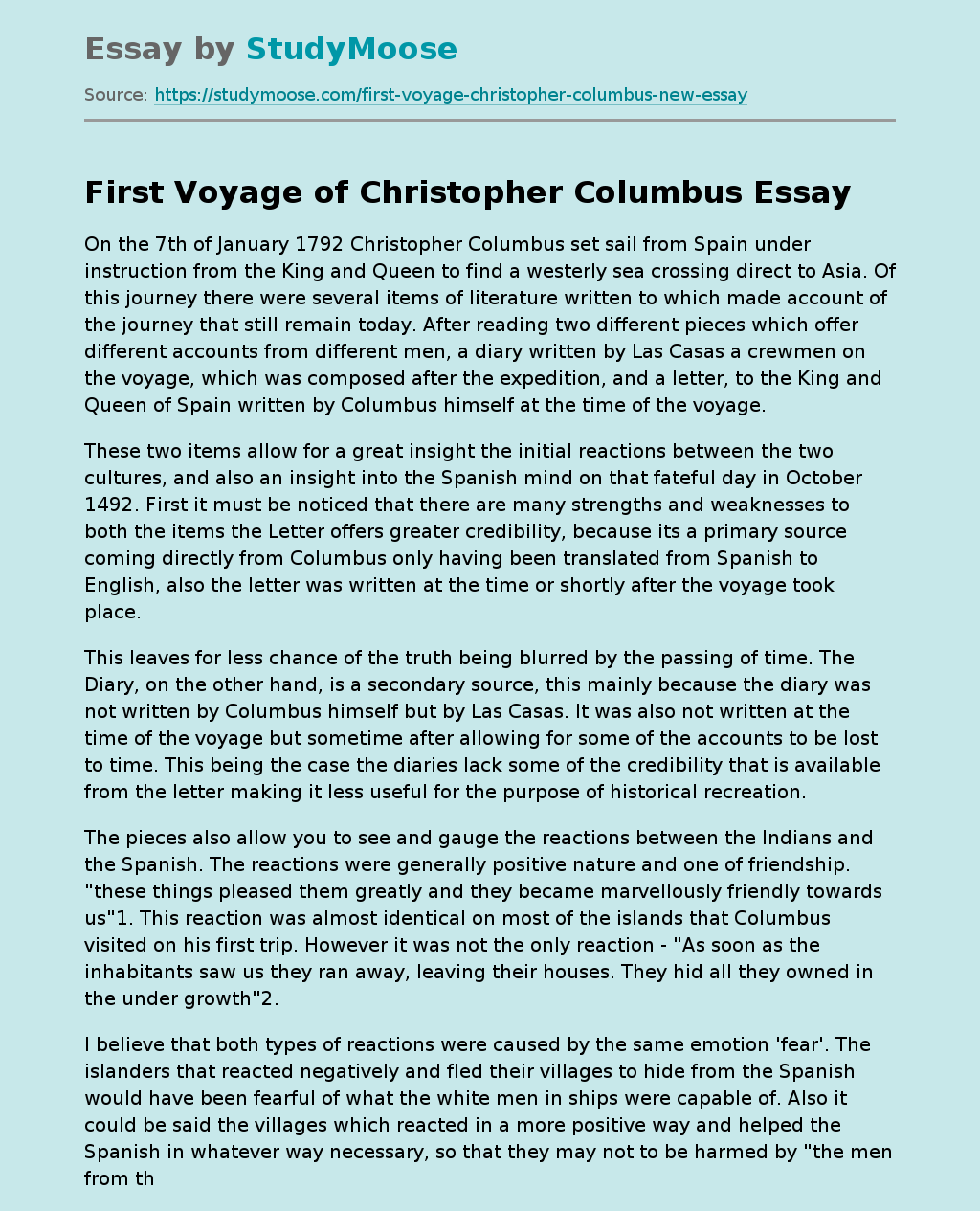