In Charles Dickens’ Great Expectations, Pip, the main protagonist in the story, is very idealistic and yearns to become a gentleman. He wants to better himself and rise above his humble origins in hopes of winning over his love Estella. Pip is also a very kind man and cares about the ones who are close to him. However, he is also a very arrogant man, and he does not see what his arrogance costs him, until he learns that true happiness in life does not come from wealth or status.

Pip has an idealistic desire to become a gentleman, to elevate his status in life, and to impress the beautiful girl Estella who he has fallen in love with her due to her charming appearance. He demonstrates this trait on many occasions. Such as when he tells Biddy that he is “not happy as I am… I am disgusted with my calling and with my life,” and “I want to be a gentleman.

” He also displays his idealism as he strives to educate himself and become “uncommon,” by having Biddy “impart all her learning to me… it appeared to me that it would take time to become uncommon… nevertheless: I resolved to try it.” He further exhibits this trait by continually trying to win over Estella even though she only gives him discomfort “everything in our intercourse did give me pain….I could put no trust in it, and build no hope on it; and yet I went on against trust and against hope.

” In his idealistic desire to become a gentleman and to win over Estella he believes he will live a much happier life once his goal is achieved. Pip’s ambitiousness, however, is replaced with contentment as experience reveals to him that happiness is not gained through being a gentleman and that the true beauty of a person lies within their heart and not in their outward appearances.

Pip is also a very kind man. He displays his kindness in trying to help his friend Herbert out of debt by helping his business ventures begin “how I could best try with my resources to help Herbert to some present income… and gradually buy him on to some small partnership.” Pip also displays kindness in his actions towards Magwitch as he constantly worries for his safety “Were I might go, what I might do, or when I might return, were questions utterly unknown to me; nor did I vex my mind with them, for it was wholly set on Provis’s safety.” After the failed attempt to smuggle Magwitch out of the country, Pip continues to visit him every day when he is in prison as he tells him “I will never stir from your side when I am suffered to be near you. Please God I will be true to you, as you have been true to me.” Pip was true to his promise and was faithful to Magwitch to the day of his death.

Pip is also very arrogant in his actions; this is seen in his ungrateful treatment towards Joe and Biddy when he has come of great expectations. When Joe comes to visit Pip, his feeling towards this was “not with pleasure” and “if I could have kept him away by paying money, I certainly would have paid money.” He did not think there was “anything low and small in my keeping away from Joe” and he almost wants nothing to do with him even though he “was bound to him by so many ties.” He also displays his arrogance in his treatment towards Biddy. When he asked Biddy why she received him “coming down here often to see Joe” “with a marked silence” Biddy asks him if he in fact will come down often, to which Pip took insult to, as a “very bad side of human nature!” even though he knows he won’t come back “Once more the mists were rising… if they disclosed to me… that I should not come back… all I can say is, they were quite right.”

However, Pip does not remain arrogant and a change overtakes him. After his encounter with Magwitch his benefactor, he realizes the true worth of his companions and how wrong he was in his treatment towards them “my repugnance to him had melted away… I only saw a man who meant to be my benefactor and who felt affectionately, gratefully, and generously towards me with a great consistency through a series of years. I only saw in him, a much better man than I had been to Joe.” Pip has become humbled by his experience and decides he will return to the forge to marry Biddy. However, in his arrogance in trying to win over Estella and casting Biddy and Joe aside, he was too late, as Biddy had married Joe. However Pip is changed by his mistakes and is now very grateful towards Joe and Biddy and sorry for his treatment towards them, “receive my humble thanks for all you have done for me, and all I have so ill repaid!… and now… pray tell me, both, that you forgive me!” Through his experiences he is now a humble man and not the ungrateful arrogant person he once was.

Pip was a very kind man., but he was also arrogant and vainly idealistic in thinking the way to better himself was through wealth and status. These traits, through his experiences, are transformed and he is now humble and content, as he learns a hard lesson that true happiness does not come from wealth or status, as was his idealistic view, but from a contentment that comes only from within. Pip has become a true “gentleman.”

In Charles Dickens’ Great Expectations, the main character of the story, Pip, struggles personally with a man vs. self-conflict as he struggles about his status in life. This conflict within him begins after a visit to the Satis house, where he meets Miss Havisham and Estella. He is greatly offended by Estella’s insults towards him “what coarse hands he has. And what thick boots!” and he begins to feel ashamed of his personal appearance, “I took the opportunity… to look at my coarse hands and common boots…

They had never troubled me before, but they troubled me now, as vulgar appendages.” He also begins to feel ashamed of his upbringing “I wished Joe had been more genteelly brought up, and then I should have been so too.” This continues as Estella brings him food and a mug of beer and does not even look at him, much the way one would feed a stray dog, leaving Pip feeling utterly dejected, “I was so humiliated, hurt, spurned, offended, angry, sorry – I cannot hit upon the right name for the smart – God knows what the name was.” Pip hangs his head and cries in shame.

This conflict intensifies over the course of one year, as Pip grows more ashamed of his home, a place that once afforded him comfort. “It’s a most miserable thing to be ashamed of home… But, Joe had sanctified it, and I believed in it… now it was all coarse and common.” As his status changes, the conflict continues to escalate after he has come to “great expectations.” In his rise to “property” he believed that he would live a much happier life as a gentleman “No more low wet grounds, no more dykes and sluices, no more of these grazing cattle… henceforth I was for London and greatness: not for smith’s work.” However, he did not live a happy life, and his conscience plagued him “As I had grown accustomed to my expectations… Their influence on my own character… I knew very well that it was not at all good.” “I lived in a chronic state of uneasiness in my behavior towards Joe. My conscience was not by any means comfortable about Biddy.” He in fact was living quite miserably “We were always more or less miserable… I detested the chambers beyond expression,” “I should have been happier… if I had risen to manhood content to be partners with Joe in the old honest forge.”

Pip’s conflict reaches its climax and resolution when he discovers his benefactor. The climax is reached upon discovering that Magwitch, the convict he met so long ago in the marshes, is indeed his benefactor “the dread I had of him… could not have been exceeded if he had been some terrible beast.” He now wishes that he had never come of his expectations and realizes what a fool he was “O, that he had never come! That he had left me at the forge – far from contented, yet, by comparison happy!” “I began to fully know how wrecked I was, and how the ship in which I sailed was gone to pieces…

But, sharpest and deepest pain of all – it was for the convict… that I had deserted Joe.” His conflict reaches its resolution after Magwitch is arrested and his expectations have departed. However, he is able to see the good in Magwitch and began to care for him greatly as his “repugnance to him had melted away.” He finally realizes that he does not need wealth, nor does he need to elevate his status, in order to be happy. As he “lived happily… and lived frugally” with his dear friend Herbert, he is no longer ashamed of his humble beginnings and is content with his place in society. 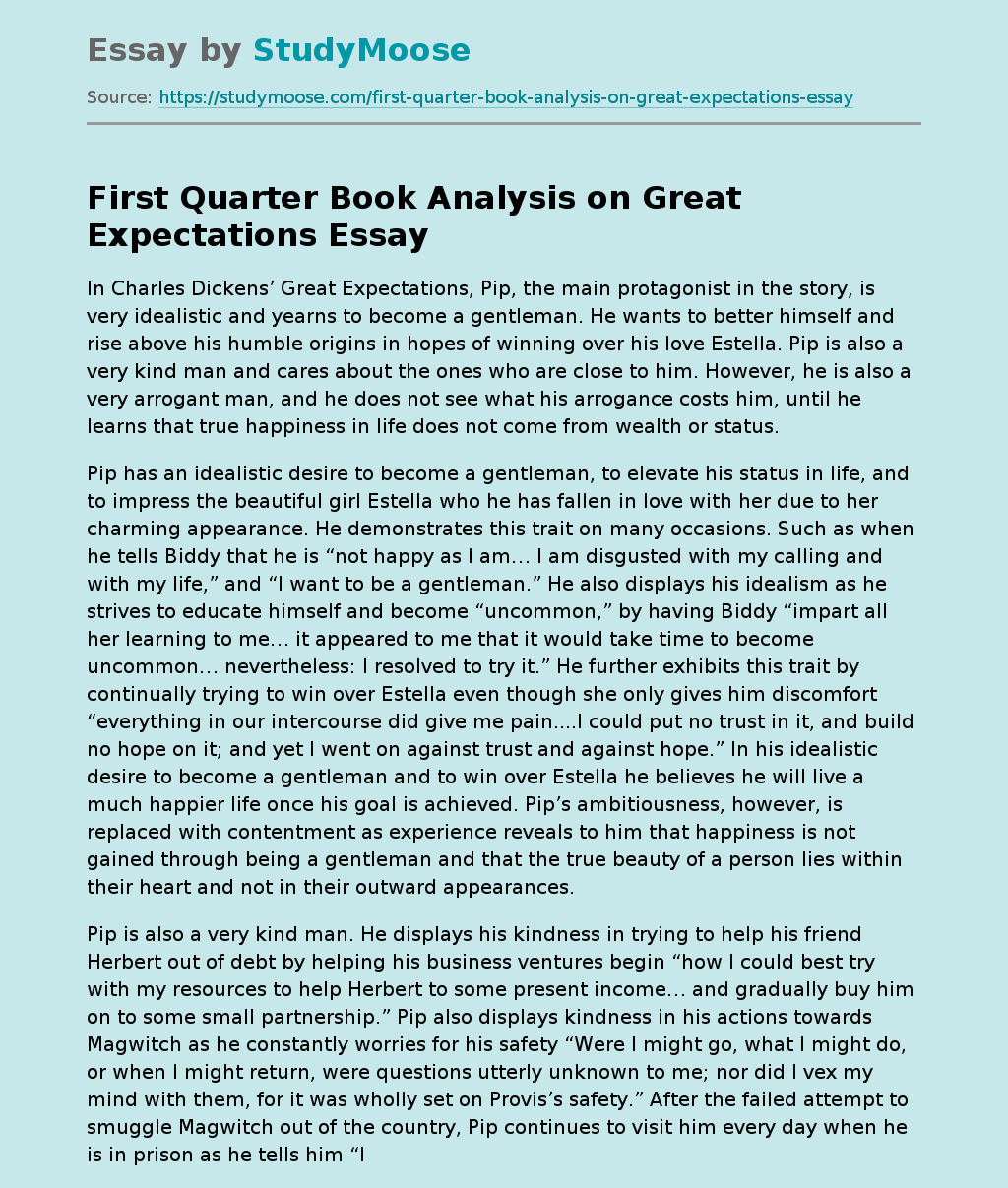