First Poem for You

The Shakespearean sonnet “First Poem for You” has an iambic pentameter and consistent rhyme scheme. Every other line represents a true rhyme – the final accented vowels and all succeeding consonants or syllables are identical. For example the words “complete” and “neat” (Addonizio 1, 3). Every line of the poem has a basic stressed and unstressed syllable format, except the last line. The extension of the last line “but touch them, trying” implements a longer stress (14). I believe this has definite meaning to the structure of the poem.

Don't use plagiarized sources.
Get Your Custom Essay on First Poem for You Just from $13,9/Page

Nevertheless, it has direct meaning and relation to the poem. There is a woman writing to her boyfriend about her feelings towards him.

She likes to touch his tattoos, have sexual intercourse, yet she recognizes the pain between them and states that “such permanence is terrifying” (13). These split feelings cause a tone of ambivalence – conflicting feelings toward a person. She is touching the tattoos in complete darkness, which can help the reader understand her desire for her boyfriend yet the shame or timidity that is shared as well. Most shameful acts are done in the dark. Culture and society distinguish the pros of light vs. darkness.

This poem does not directly reflect light vs. darkness (good vs. vil), but I believe the negative connotation the word darkness holds, transcends into this poem. If she was touching her boyfriend in the light the poem may have a more optimistic mood. However, darkness is usually related to death, therefore having a pessimistic mood. Furthermore, the connotation of death demonstrates a more in depth meaning of verse 11, “you’re seared to ashes”. This is a representation of the boyfriend’s death. Perhaps, he is burned alive, but I believe it refers more to him being cremated. Either meaning the reader interprets, the writer wants the reader to understand that the tattoos will remain until death.

This is important because I believe the lasting of the tattoos reflect the “until death do apart” affections the woman has. This brings us back to the last phrase of the poem, “but touch them, trying”. Despite the confusing feelings, the woman wants to work through the relationship till the death of one of them. Just as the tattoos will remain till death, so will her pursuit towards her boyfriend. The tattoos have many symbolic representations that help the reader understand the feelings the woman has for her boyfriend.

Water and lightening are two words that have a symbolic meaning for the poem. “Lines of lightening pulsing just above your nipple, can find, as if by instinct, the blue swirls of water on your shoulder where a serpent twists, facing a dragon” (4-7). Though symbols can have multiple meanings, the tone and theme of the poem helps to point out the specific meaning behind the relationship. The girlfriend, of the guy with the tattoos, enjoys touching the tattoos when she is unable to see the guy. She knows by heart just where the lightening is pulsing.

In this case, the lightening symbolizes power of love that has a pulse, just like a person’s heartbeat; a beat that can go faster or slower depending on the situation. It is instinctive for the woman to know where every tattoo on the guy, just like in a relationship, a person may know every mark or scar on the other’s body. The woman knows that just above his shoulder are the blue swirls of water, where the water is symbolizing that the boyfriend may be pure at heart. The serpent facing the dragon symbolizes the warrior in him, and it also shows he has no fear against his enemies. When I pull you to me, until we’re spent and quiet on the sheets, I love to kiss the pictures in your skin” (Kennedy, 601), means that she pulls him closer to her while they’re laying down and falling asleep, she expresses her love and care for him until there’s no more time left in the night, until it’s all spent. To kiss the pictures in his skin simply means kissing his tattoos. “They’ll last until you’re seared to ashes; whatever persists or turns to pain between us, they will still be there” (Kennedy, 601), whatever persists…

First Poem for You. (2016, Sep 12). Retrieved from https://studymoose.com/first-poem-for-you-essay 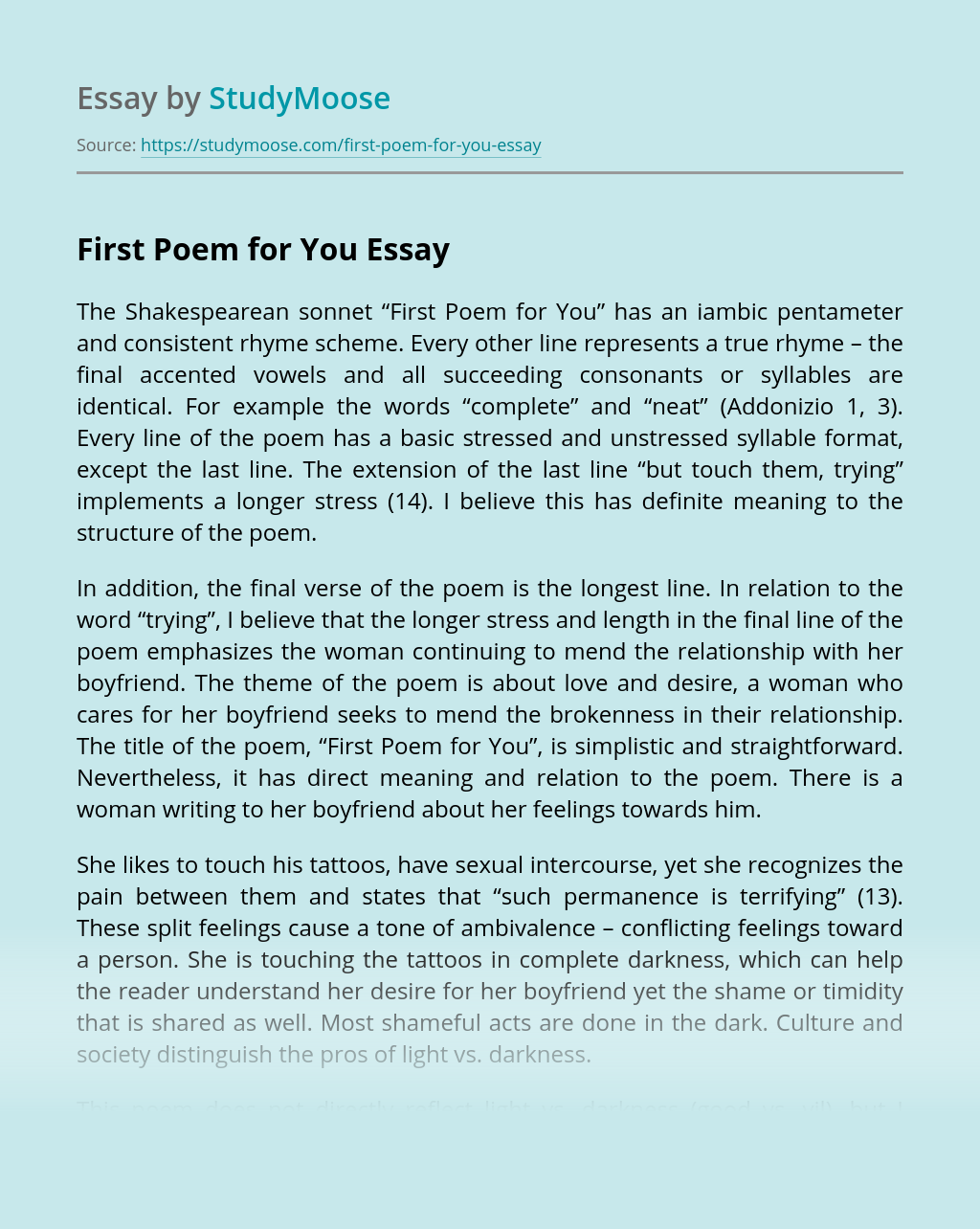 Shakespeare’s Sonnet 130 is a parody of the common sonnet of Shakespeare’s time. Although one can interpret the poem as a mockery of the romance in the traditional sonnet, it actually is revealing how superficial the normal sonnet is. Shakespeare uses metaphors against themselves in order to produce a more practical description of the love...

William Shakespeare’s Sonnet 129 is a classic Shakespearian Sonnet from his distinguished collection published in 1609. The Shakespearean Sonnet is unquestionably the most intellectual and dramatic of poetic forms and, when written well, is a masterpiece not only of poetic talent but intellectual talent as well. Like the majority of sonnets, Sonnet 129 has fourteen...

Get Essay
Critical Analysis on Sonnet 12 by William Shakespeare

William Shakespeare wrote a group of 154 sonnets between 1592 and 1597, which were compiled and published under the title Shakespeare’s Sonnets in 1609. Our attention will focus on sonnet 12, a remarkable and poignant poem about the relentless passing of time, the fading beauty, immortality, death and Old Age, these subjects being typical of...

Traditionalism and Modernism in Poetic Form: Sonnet and Villanelle

Sonnets and Pantoums are two of the most widely recognized poetic forms. Each is known for rich histories, as well as for modern variations which have allowed the more traditional forms to take on more contemporary subject matter. Sonnets are no longer thought of as being the devotional poems of Shakespeare’s day, while pantoums have...

“Ozymandias” (pron.: /ˌɒziˈmændiəs/,[2] also pronounced with four syllables in order to fit the poem’s meter) is a sonnet by Percy Bysshe Shelley, published in 1818 in the 11 January issue of The Examiner in London. It is frequently anthologised and is probably Shelley’s most famous short poem. It was written in competition with his friend...