The reason I have chosen to study these two poems is due to the vast contrast between them, and how they represent two entirely different examples of love.

“First Love” by John Clare was written in the 19th century. The poem is written in rhyme rhythm ABABCDCD. It is a poem about how the poet had fallen in love but his love was unrequited. The poet sees a girl for the first time, and immediately seems to fall in love, making it seem like more like a crush, rather than real love.

The poet mistakenly believes that she loves him back, and she feels the same way about him. First love has a simple rhyming scheme and uses very basic language to show the innocence of the man it is happening to.

“A Woman to Her Lover”, written by Christina Walsh, is a very sophisticated piece of poetry with no set rhyming scheme. It is about a woman who has received a proposal of marriage from a man and is considering all of the reasons why he wants to marry her.

She speaks on behalf of all women, and issues her response. In the first three stanzas, she looks at, and mentions the typical role of women in society at the time the poem was written. She claims she would reject the proposal if she is dominated and used by her husband. This is typical of how women were treated in society at the time, as they were used to look good for their husbands, cook, clean, and run the family.

The poem, ‘A Woman to Her Lover’, has 4 stanzas, of different lengths. It is a free verse poem, and there is no set rhyme scheme. This has a good effect, as it reflects the speech like statements.

In this poem, love is represented in both negative and positive ways. At first the writer explains how she doesn’t want to be treated. However, towards the end of the poem, she begins to explain how she would like to be treated, and how her love truly is. This shows vast contrast, as we are first made to believe that she doesn’t want to be with this man at all. Then in the last stanza, her tone changes significantly. It lightens the poem, and hides her assertive tone of voice. The use of the conditional tense throughout the poem makes the poem appear like a marriage contract. This is striking, because it contains the conditions of a marriage contract but from a woman. This would seem extremely odd at that period of time, as women were treated as subservient and marriage contracts would be made with men’s interests at heart.

One strikingly odd thing about this poems layout is the exclusion of punctuation. It seems as though the woman has forgotten the rules of poetry and written freely. This is symbolic for the disregard of the rules of patriarchal society and it seems as though women want to break free from the conventions of society, and this is a metaphor for the poem in general.

The second poem ‘First Love’ is a romantic love poem. The poem deals with a man that has been struck down with love for the first time – ‘I never was struck before that hour, with love so sudden and sweet.’ This implies he is experiencing love for the first time. Even though love is affecting him mentally, it also starts to affect him physically. We can see this in line 6 – ‘My legs refused to walk away.’

‘First Love’, is a story of unrequited love, and has a sombre tone.

John Clare felt something he had never experienced before, when he saw this women. He had never before, felt anything for a woman like he had done at this moment. It was his first time experiencing love, as he stated “I never was struck before that hour.” We can also tell that it was quick, and hit him instantly – “With love so sudden and sweet.” He then said, “And stole my heart complete.” This is a bit theatrical for someone he had just met, but shows us he really likes this woman. John Clare’s view of love was positive. We could see this very easily when reading the poem, as his tone of language was directly associated with love and romance. I feel that Clare’s view of love is exaggerated, as to love someone, you should know the person.

John Clare uses many comparisons to nature, as it was typical of the time period in which the poem was written. He makes his lover seem innocent and beautiful. Clare also uses personification – “My face turned pale as deadly pale.” This shows the depth of feeling he has for her. He also describes how he can see nothing but her, which again emphasises his feelings for her. He expresses falling in love as something magical. He describes how his leg “refused to walk away”, which implies he was totally mesmerized by her beauty, he did not want to really walk away. It shows he has lost his heart to her, and is blinded by love.

The man in Clare’s poem is naive and does not understand his feelings. In Walsh’s poem, the woman is shown to understand and know about love.

Both poems begin by getting to the point immediately. Although both poems are about love, they talk about it in different ways. Clare’s poem is about hating love, and how it makes you feel. On the other hand, Walsh’s poem is about the different types of love a husband may want from a wife. Both poems have contrasting styles.

It is clear in both poems, that love can be interpreted in different ways, and is wanted for all kind of things, like a woman to be a slave, or a servant to her husband who has the power to own her and do as he pleases. I feel this poem correctly displays different sorts or marriage, and the reasons for it.

In Clare’s poem, the man’s life turned to clay, as he was not familiar with the sensation of love, and it demoralised him. He grew embarrassed as blood rushed to his face. As opposed to the intelligence and understanding of love shown in ‘A woman to her lover’, his was basic and confused.

Both poems intend to show how it feels to fall in love, but I think they are rather unsuccessful. First Love showed love as an awful thing and used negative words to describe it, which a minority may believe to be true. Love may be frightening but not nearly as much as it is portrayed in the poem. On the contrary in ‘A Woman to Her Lover’, it is shown as an awful thing, similarly to First Love but it then turns to show the benefits as well, which makes it more realistic. It also uses real situations, making it more believable and honest.

Of the two poems, I believe ‘A Woman to Her Lover’ is far more successful and plausible. I think this is because it shows different situations, and responses to them, thus making the poem far more comprehensible and realistic. 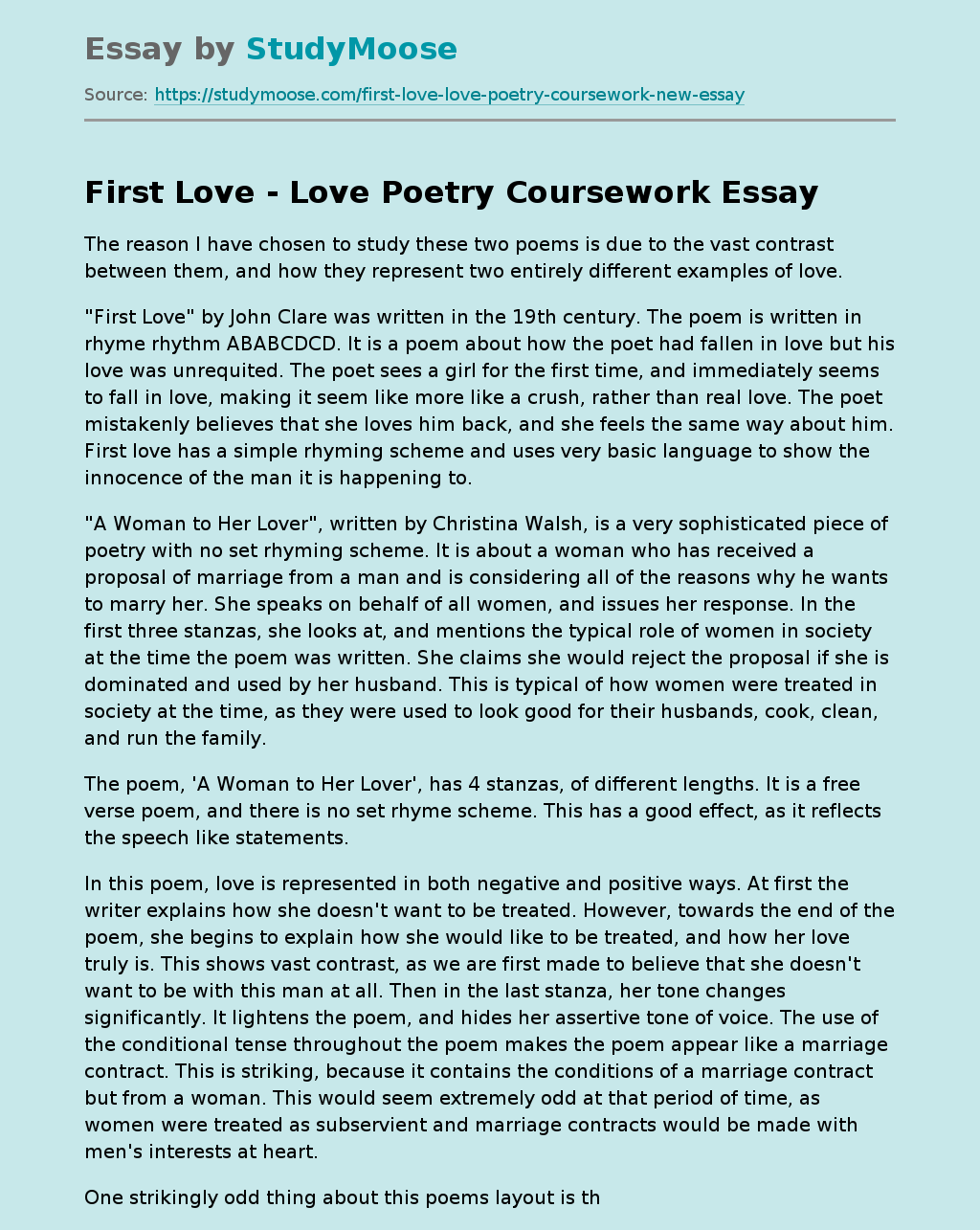