On first looking into Chapman's Homer

John Keats was a famous romantic poet from England. He was born on 31 October 1795 in Moorfields, son of the manager of a livery stable. His parents died when he was young so he had to live with his brothers and sisters. He began writing poems in 1814, when he was about 19 years old. Keats left school in 1811 to be apprenticed to the surgeon Thomas Hammond. After four years he registered as a student at Guy’s Hospital. A year later he abandoned medicine to write poems all this life-time.

Don't use plagiarized sources. Get your custom essay on
“ On first looking into Chapman’s Homer ”
Get custom paper
NEW! smart matching with writer

Keats didn’t stop writing poems, even when he was nursing his brother Tom that was ill of tuberculosis. During this time Keats wrote “Isabella”. He wrote many poems which are still regarded as classics, including “Ode on a Grecian Urn” and “The Eve of St. Agnes. ” He spent his whole life writing more than 30 poems and died of tuberculosis in Rome in 1821. John Keats first great poem was written on the subject of one of his inspirations, Homer.

One of Keats’ schoolteachers, Charles Clarke, introduced him to the George Chapman translation of Homer.

The George Chapman translation of Homer

Clarke and Keats stayed up all night reading Homer’s translated works and after Keats got home he sat down and wrote the first poem, which he finished the next morning and posted to Clarke in the mail. That poem was called ‘On First Looking into Chapman’s Homer’. In this Keats makes particularly effective use of the natural division of the Petrarchan sonnet.

The theme of exploration dominates the octave, with the metaphor of the poet as literary adventurer, and this followed by the theme of discovery in the sestet, with the use of similes through which Keats attempts to convey his wonder.

The critical moment of the sonnet

The critical moment of the sonnet, the Volta which prompts the turn from one theme to the other, is the reading of Chapman’s Homer. The major theme of power and directness is shown particularly in the last four lines, with the sense of awe so strikingly conveyed by the image of Cortez on a mountain peak, staring at the at the Pacific while his men wait, wondering what overwhelming sight has produced this state of frozen amazement and adoration in their leader. His sonnet could be said simply to present exploration and colonization as the work of the poet.

As he moves from his own discovery of Chapman’s classical literary world to the Spanish explorer’s discovery of the New World, historical and imaginative process are linked by a common concern with territory and conquest. By linking his own discovery to that wonders of the explorers, he affirms the poet’s imaginative ability to disclose the wonders of the world. Keats used linguistic and stylistic devices to make his poem interesting and to control the atmosphere as well to create a tight rhythmic sonnet to emphasize the seriousness of the poem.

He used alliteration to control the poem. Example of alliteration from the poem: Or like stout Cortez when with eagle eyes The alliteration in the phrase above is the use of ‘when with’ and ‘eagle eyes’ because it repeats the consonant ‘w’ and ‘e’. So when the reader reads it will increase the pace without them knowing it. He used it a lot in the last part because the last six lines gives the most serious atmosphere, alliteration is used to prevent the reader from slowing down. Another example is:

Oft of one wide expanse had I been told The consonant ‘o’ is repeated to increase the pace thus creating rhythm. Keats also use a device called assonance. This is the repetition of vowel. Examples from the poem: “gold, hold, told, bold”, “seen, been”, “skies, eyes, sunrise”, and “ken, men”. This creates rhythm, also the basis of rhyme. The use of assonance really indicates that the poem is Petrarchan sonnet because it shows that there is no rhyming couplet. He also uses linguistic devices. The most common usage is the metaphor.

He uses metaphor to make the meaning or description clear, this also lead on to the creation of ambiguity. The metaphors he used: “realms of gold”, “wide expanse” and “pure serene”. Realms of gold could be referring to a Greek island or to the book that he read Chapman’s Homer. The wide expanse could symbolize a Pacific Ocean of a view from the Peak of Darien. By use the metaphor “pure serene” he changed the tone because this refers to a peaceful environment. He also uses simile, there are only two similes in the poem.

Those similes are located in the sestet. “I felt like some watcher of the skies” and Like Cortez when with eagle eyes”. This makes the meaning that he tries to express clear. He did make a really good use of connotation. Examples from the poem: “realms of gold”, “pure serene” and “planet swims”. This is connotation because is doesn’t make sense how can a planet swim, but it really means that the discovery of a place. Some of these could be example of personification because he gave human features, which is the ability to swim.

Powerful meaning of the poem

After I have read this, I thought that he must have enjoyed Chapman’s Homer because the poem he wrote had a very powerful meaning but he also use scenes to describe a divine place. But he clearly showed the power and the poem is very direct and has features which makes the reader thinks hard to find the real meaning. ‘Realms of gold’ refers to the traditions of poetry with which Keats was so familiar. Keats frequently uses images of gold to suggest greed or cultural impoverishment of nineteenth-century capitalist society.

It leads to the questions whether Keats intended the gold reference here to have any negative connotations, could the reference point to ways in which his literary imperialism enacts the desire for personal gain or glory demonstrated in historical imperialism. On First Looking into Chapman’s Homer by John Keats definitely had relationships with some other poem in the Section D. I think that it has something to do with colonization and his personal desire. This related to ‘Our History” which is all about the colonization. Both are related to history, exploration but with very different perspective.

On first looking into Chapman's Homer. (2020, Jun 02). Retrieved from https://studymoose.com/first-looking-chapmans-homer-13263-new-essay 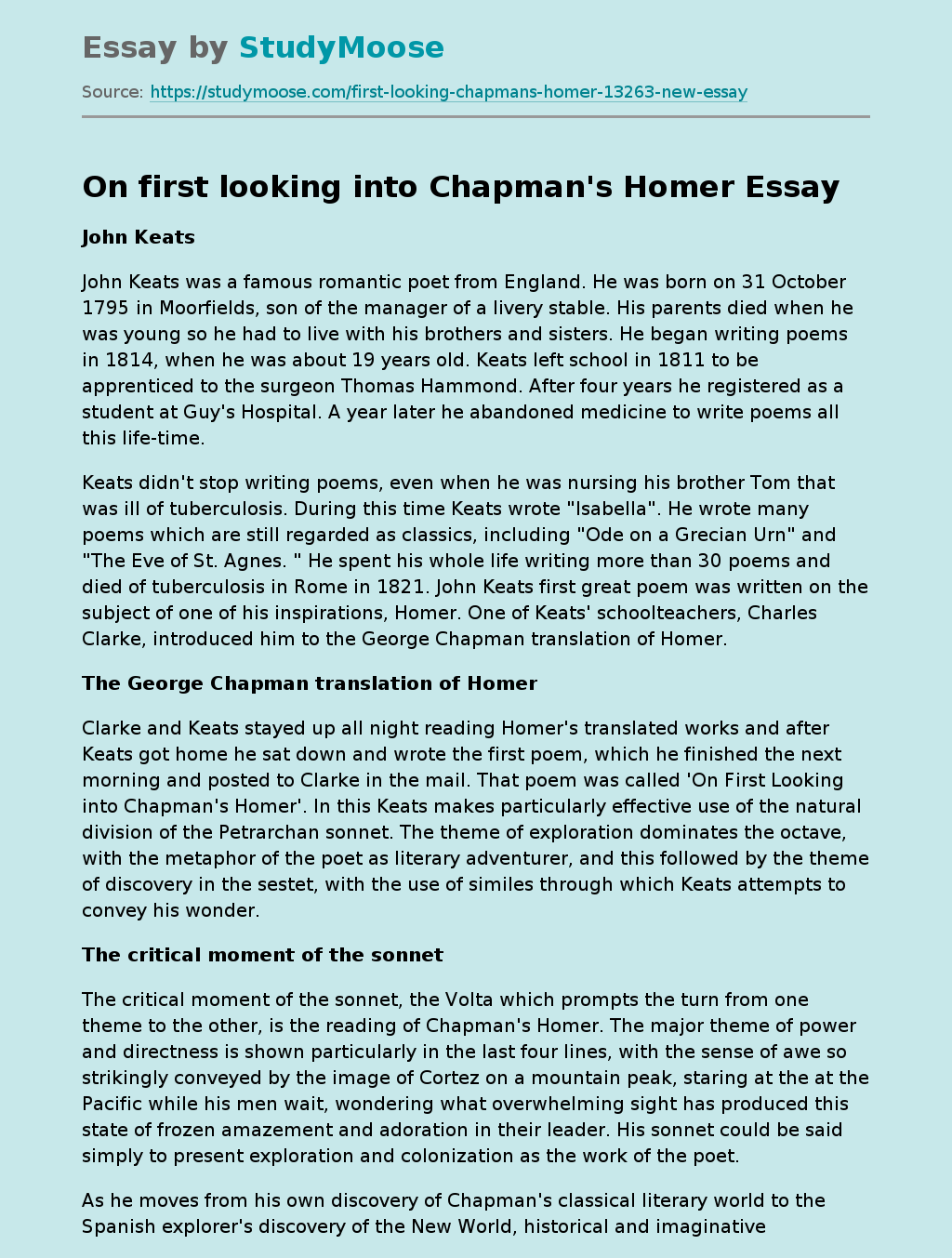