The movie Finding Neverland is about the writer J. M. Barrie and his journey of writing plays about imagination and happiness. Barrie has a close relationship with Sylvia Llewelyn Davies, and her sons, who give Barrie the idea of the well-known play Peter Pan. J. M. Barrie attends the reception of his latest play, ‘Little Mary’ and from this reception he meets Sylvia, who is a widow now. Barrie enjoys spending time with Sylvia and her four sons, and through this proves to be a great playmate and father-figure for the boys.

Sylvia’s mother, Emma du Maurier does not like the amount of time Barrie spends with her family.

Emma wants to take control of her daughter and grandsons, since Sylvia is becoming very weak from an unidentified illness. As Sylvia becomes more and more ill, she is unable to attend Barrie’s new play production. However, Barrie arranges a mini-version of his new play to be presented at her home.

Finding Neverland can be interpreted using the archetypal literary criticism, as it does centre on the idea of the unconscious mind and its ability to hold and create universal symbols and patterns to which all humans can relate to.

The archetypal hero character of this movie is playwright J. M. Barrie. Barrie, in the beginning of the movie, does not have any ideas of creating a new play. However, when he meets Sylvia’s four sons; George, Michael, Jack, and Peter, through their imagination, Barrie gets ideas. The imagination starts, when Barrie meets the Llewelyn family at London’s Kensington Gardens, while walking his St.

Bernard dog. Ever since that day, Barrie has been spending a lot of time with Sylvia and her sons, creating imaginary worlds of pirates, castles and cowboys.

For Barrie to create these imaginary worlds for the children, they cheer up and enjoy the time, since they do not have a father anymore. Apart from all this fun and enjoyment, there is a femme fatale character who is Emma du Maurier, the mother of Sylvia. Emma does not want Sylvia and her sons to be spending so much time with Barrie, because she thinks that he is corrupting their minds. By this, Emma tries to manipulate Sylvia into stopping the amount of time she and her sons spend with Barrie, and more time with the family.

However, through all this manipulation and control from the mother, Sylvia and Barrie can be seen as two star-crossed lover, since they both love and care for each other in a close relationship. In Finding Neverland, the archetypal situation is for Barrie to create a new play. Barrie has a quest to complete, which is to get ideas about the next play he should write. For Barrie to meet Sylvia’s four sons, he got his whole idea of writing his next play, from these four boys imagination. Barrie’s has now reached his task, and that is to create a play using the imagination of kids and put it on stage to show to the public.

Along with the quest Barrie has to undertake, there is an archetypal symbol of light and dark. The symbol of light in this movie, are the four boys and Sylvia. Without them, Barrie would be in a loss of ideas, since he gets the idea for his new play from his experience with the Llewelyn family. The symbol of darkness in this movie is the mother of Sylvia, Emma du Maurier. Emma, talks behind Barrie’s back and tries to tell Sylvia things about Barrie that are not true. Besides all the back talk, Barrie still is persistent in completing his task and showing the public his new play.

Through further analysis of the movie Finding Neverland, Northrop Frye’s Four Story Model can be used to analyze this movie. The movie Finding Neverland can be analyzed as a romance story, since there is a world of innocence. In this world of innocence, the four boys are the ones who joyfully imagine with Barrie all the wonderful stories of pirates and kings and fulfill the desire for order and meaning. The hero, Barrie has an adversary who is Emma, the mother of Sylvia. She tries and stops Sylvia and her sons from playing with Barrie.

The theme of this movie, makes use of visions and revelations, by the fact that Barrie gets the visions of his new play from all the imagination that the four kids show. Through these imaginations, Barrie shows a progress toward fulfillment in creating his new play. The basic plot, is Barrie goes on a perilous journey, a struggle follows in which he proves himself in the doing the task. When Barrie completes the quest of creating the new play, which is known as Peter Pan, there is triumph and exaltation of the hero Barrie.

The basic imagery seen in this film, are trees and animals that come to life and assist Barrie in completing his quest, from all the imagination and creativity the four kids show to Barrie. To conclude, Barrie has accomplished his main goal, through all the creativity and imagination that was offered with the help of Sylvia’s four sons. Finding Neverland is a story that really emphasizes the importance of imagination and how it can really help someone in times of tragedy and loss. Humans need that creativity to imagine things in another world and use it for the benefit for oneself and other, just as Barrie did for Sylvia and her family. 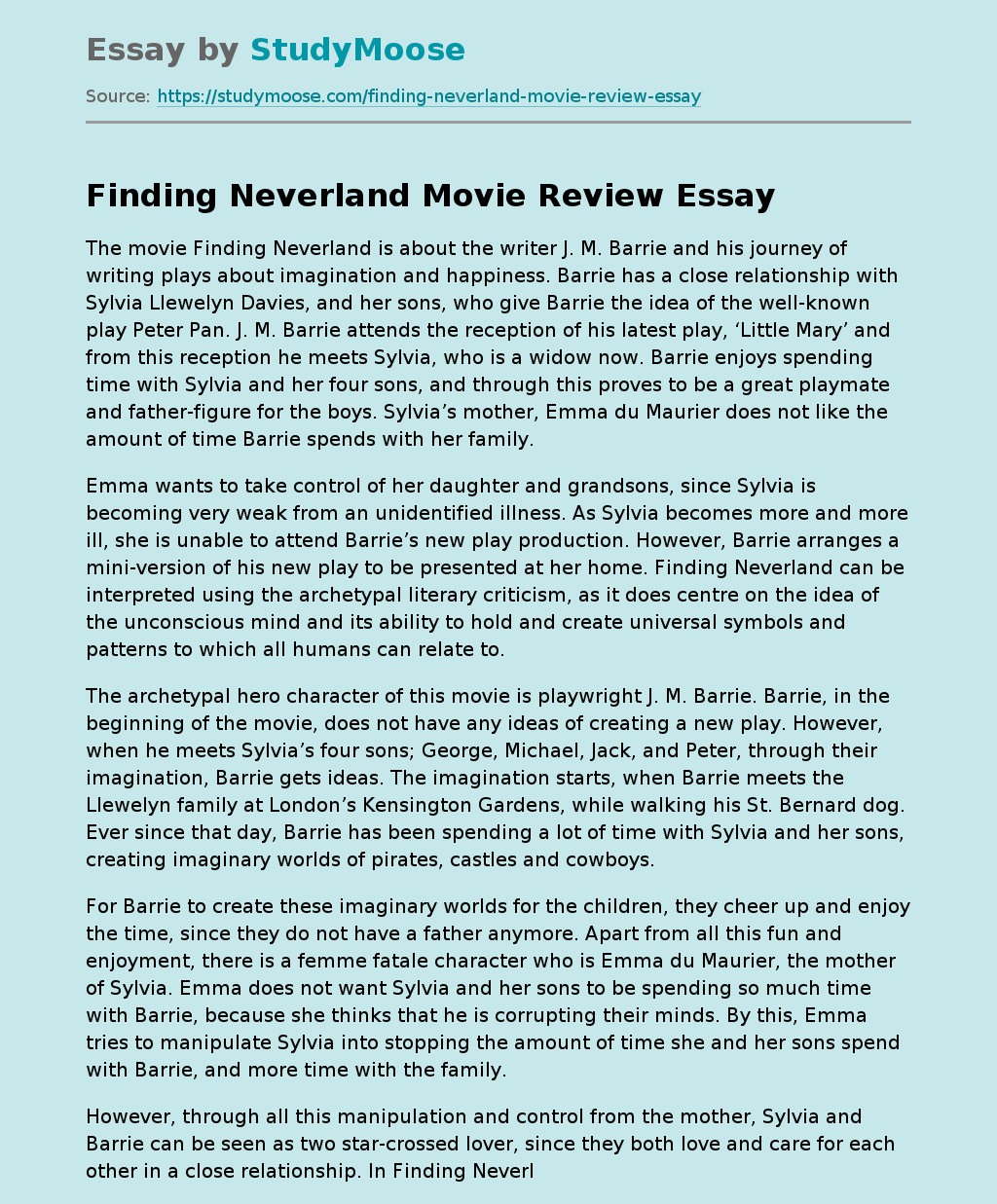