Through the new King Henry V’s speech to his brothers after their father’s death Shakespeare deals with the realities of succession, the difficult negotiation between governmental stability and a confused power struggle, and the death of a king while trying to keep his character true to their personality. This speech touches on everything from politeness and external observation, to the fear that naturally comes in a shift of power, to different kinds of mourning.

Hal, newly King Henry V, must take his place as king and reassure everyone of the continuing stability of the kingdom, demonstrate a proper degree of public mourning as both a subject and the son of the former king, and deal with his own grief.

When he says “this new and gorgeous garment, majesty, sits not so easily on me as you think” (Henry IV, Part 2, 5. 2. 44-45) he is not just simply trying to dismiss any jealousy or thought of resistance amongst his brothers, but he is also telling the absolute truth.

Just like he did with the eulogies of both Hotspur and Falstaff in earlier parts of the play, Hal continues to use honesty in order to lend a more genuine tone to his otherwise fairly formal words. He reassures them of his intention to support them by bluntly telling them that he knows they fear what he may do, implying even that they might fear for their own lives, but that it “is the English, not the Turkish court, not Amurath an Amurath succeeds, but Harry Harry.

” (Henry IV, Part 2, 5. 2. 7-49) He introduces and dispels the comparison between himself and a ruler who literally strangled his brothers, addressing the most extreme possibilities quickly. By the end, he assures them that not only will he not harm them; he will protect them and do well by them “I’ll be your father and your brother too. Let me but bear your love; I’ll bear your cares. ” (Henry IV, Part 2, 57-58) In that, he additionally introduces the potentially uncomfortable issue of personal relationships. Once their brother, he is now also their king; once his brothers, they are now his subjects.

He works with this beautifully, referring to their mourning and sadness for the death of their father as “a joint burden laid upon them all” (Henry IV, Part 2, 5. 2. 55) before he moves on to the things he promises, connecting himself with them in one way even as he has to separate himself from them in another. In this speech Hal starts off responding to a greeting by the chief justice by saying that his new robe doesn’t fit him as comfortably as the justice might think. Then turning to his brothers he tells them he knows that their sadness over their father’s loss is now mixed with the fear of him now being king.

He mentions to them that they are in an English court, not the Turkish one and unlike the Turkish king, Amurath, he is not going to have his brothers killed when he inherited his father, King Amurath’s, crown; he explains saying he is “but Harry Harry” (Henry IV, Part 2, 5. 2. 49) basically saying he is a Harry, following another Harry and they have no reason to worry. He tells his brothers to be sad because being sad truly suits them. He explains that they look so regal in their sorrow that he too will put in the sense of sadness, saying he will also wear it in his heart.

He warns them to yes be sad, but don’t let it become anything more than a burden that they all share jointly. He assures them that as far as he is concerned, he will be both their father and their brother now. That they are to just trust him with their love, and they can trust him to care of them. He concludes his speech by saying they should keep weeping for Harry, who is dead and he will keeping mourning also, but he says one Harry still lives, and he will convert those tears one by one into hours of happiness.

This speech is important for Hal to give because it is not only Hal talking to and reassuring his brothers but also introduces him as the new King Harry V. Hal defines and explains his newly adjusted relationship with his brothers, explains that the kingdom is stable and there is no worrying over if anything bad would come out of the shift in power, and finally he tries to battle with how he wants mourn his father and what is the correct way to mourn him according to his new position as king.

Hal was motivated to give this speech after the death of his father as he explains to his brothers that he must take his place as king keep the kingdom stable, and explaining to them the appropriate amount of public mourning for them as the sons of the former king. His final motive is subtle but he dismisses any jealousy or thoughts of confrontation amongst his brothers. Hal flawlessly and eloquently delivers his speech that maintains the balance between a familiar conversation with family and the regal words of a king.

Revealing ultimately that the wild rebellion he previously upheld was truly an act and has so far worked in his favor going from a pub-crawler with the drunks to a newly regal king who would never be suspected of having such a rebellious past. In an earlier version of Hal’s speech there is not much change from that version to the newer version of the speech. In the older version of the speech something’s that have changed is the grammar and spelling. Many of the words in the older text are spelled wrong either with different letters or extra letters added to the end.

In total there are thirty one misspelled words with either different letters or extra addition of letters. Most of the different letters include an ‘f’ where an‘s’ should be in most words or the addition of an ‘e’ at the end of the word. There are also more parentheses around more words in the old text versus the new. In the newer version these words are part of the text rather than in parentheses where they could potentially be excluded depending on the preference of the actor or director. Although many of the words are misspelled the meaning between the older version and the regular text are extremely similar.

He has planned all along to become a responsible king and at his father’s deathbed, he promises that his reign will be great. After he is crowned, and again during his speech to his brothers he promises those assembled that his actions as king will atone for his past. Also underlying in the speech Hal speaks of the crown as a burden. The duties of kingship come first, surpassing friendship. Hal’s crown will make the betrayal of Falstaff and the Eastcheap crowd a necessity. Even more important than the underlying imagery is the imagery of his exact words centered mostly on brothers and sadness.

Hal refers to his brothers as a whole addressing them as ‘good brothers’. He addresses them as brothers at key parts in his speech giving the imagery that they are a united, unchanging force. He seems to use brothers to give a slightly personal feel to his regal words and to show that even though the dynamic of their relationship has changed they are still and always have been brothers. In Shakespeare’s other plays brother is used almost the same way. It is used to show a close relationship between people or showing the personal unity between or amongst a group.

Shakespeare has also used the imagery of brothers when someone in power is addressing a group of people he needs something from or in a speech before battle. The other imagery of sadness and of loss is also important in his words, mostly the sadness and loss of losing his father but also the loss of more than life itself but also the loss of old friends through circumstance like when Hal loses his friends when he accepts his new role as king, though Falstaff still believes himself to be Hal’s friend, they rarely interact.

The time is past for Hal and Falstaff; Hal’s throne demands it, and Henry V will betray the man who has been his surrogate father and friend. The speech that the new King Henry V delivers to his brothers after their father’s death touches on many different topics, emotions, and has hints of imagery that effect everyone he is speaking to. Hal must now take is fathers and show to everyone that his rebellious days are behind him.

In the speech Hal has to desperately balance the familiarity of his family with the new responsibility as king and to make sure everyone knows that no one will be harmed and there is no need for jealously. By the end of the speech it is clear that Hal realizes the burden that has now been put on him but he makes his intentions clear as he ends his speech with “But Harry lives that shall convert those tears by number into hours of happiness. 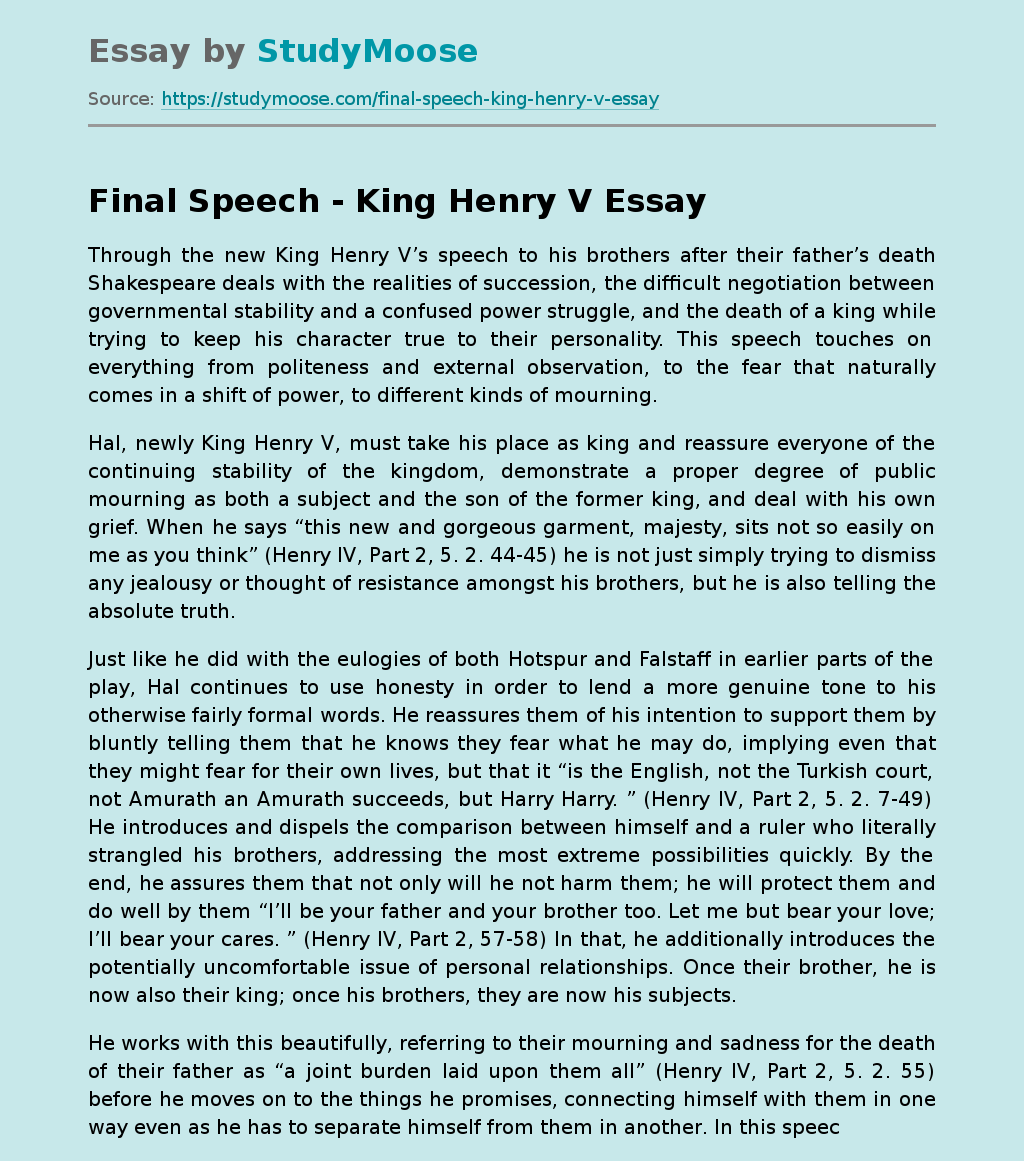