Filmmaking of Fresh Prince of Bel-Air

In this essay I am going to analyse the title credit sequence of the “Fresh Prince of Bel- Air”. I am going to talk about the camera shots and angles for each scene; the different mise-en-scenes and the unusual narrative in the beginning. I will also mention the different type faces (text) used; the characters; the language; colors and music. The “Fresh Prince of Bel-Air” is a typical American teenage show; with a big multi-media star. Will Smith is already known as a rapper.

Don't use plagiarized sources. Get your custom essay on
“ Filmmaking of Fresh Prince of Bel-Air ”
Get custom paper
NEW! smart matching with writer

The show has already been a long-running success and is famous all over the world. The “Fresh Prince of Bel-Air” is based in America in 1988 it is a situation comedy (sitcom). I am going to begin this essay by addressing the unusual narrative. This goes on for the whole of the title sequence. It explains the story in RAP (rhythm and poetry). It begins off by saying: “Now this is a story all about how my life got twisted upside down, and I would like to take a minute so just sit right there and I’ll tell you how I became the Prince of a town called Bel-Air.

” This makes the audience attracted and wants to see how he became a “Fresh Prince of Bel-Air”. Fresh Prince got into trouble because of fighting so his mum sends him to California to live with his Auntie and uncle in Bel-Air.

The “title credit sequence” is told in a story format. It is set in Philadelphia.

Fresh Prince is spinning on the throne and in the background there is graffiti and teenagers like graffiti also teenagers are confused are confused because his life will change and he will be treated like royalty. Fresh Prince is doing graffiti on the wall and a police comes and tells him off so then Fresh Prince pretends he is spraying under his arm-pits. Many teenagers like people who are naughty and also they get in trouble by doing naughty things and they think it’s funny but its vandalism. They want to be cheeky like Fresh Prince. Fresh Prince is playing basketball but he misses the hoop so the ball hits a big gang and they start to bully him. Teenagers get attracted to it because they like the way the gang hits him and also teenagers get attracted to the show even more to find out what happens when he gets beaten up. Later, onwards Fresh Prince mum finds out that Fresh Prince has been in a fight so she gets angry at him.

Even though Fresh Prince will be cheeky if he goes there but his mum wouldn’t know about it and he will be free and his mum wouldn’t tell him off because he will be far away. In the song Fresh Prince says “I begged and pleaded with her day after day. But she packed my suite case and sends me on my way.” So teenagers like it when other people get told off but they don’t like the fact if their mum sends them away even though if you beg her and tell her don’t send me away but still she does so teenagers like to see what happens when he is moving. Fresh Prince is on his way to Bel-Air and in the background theirs a lot of greenery places and theirs a big green mountain with the sign of Hollywood on top of it.

Fresh Prince however, reaches at his auntie’s mansion and he gets out of the taxi and he stands at the massive door confidently waiting for the door to be opened. Teenagers nowadays like to travel alone they like huge mansions and also they get attracted to the Hollywood sign because that’s where the actors are and there is fame and also a lot of rich people there. Also, it’s the first chance to be alone so they are free and they can do what they want. When Fresh Prince arrives at his auntie’s mansion he has fun with his cousins and he can do what he wants so teenagers are attracted to the massive mansion so they are going to talk about it and they will also talk about the beautiful site in the background.

Fresh Prince is not only a role-model but also because of his personality teenagers get attracted to him. Although, Fresh Prince is not that handsome even though many girls think he’s attractive. Fresh Prince is tall, he has an afro, he wears a baseball cap, he’s medium built, he’s dark and he also has a moustache. Fresh Prince Acts cool, he’s funny and makes people laugh, he is rebellious and shows off, he is also very brave and confident and he always smiles a lot. Therefore, teenagers like people who are brave and also like people who smiles a lot. Teenagers get attracted to the way he acts, what he wears, his hairstyle and his personality so teenagers want to be like him. Fresh Prince Values and interests are his mum because he’s obedient to her, his friends, anti-authority, sport and loves to rap and graffiti.

The reason the “title credit sequence” was a success is because of the music. The music rhymes and also the story are told in the music and people can understand it clearly. Fresh Prince uses slang words like “Yo, chillin out, maxin, relaxin and shootin and also these words rhyme. It’s a catchy rhythm it has a strong beat and its drum and base style. The lyrics are easy to remember because they are rhyming couplet used like maxin, relaxin which rhymes. In the music the voice changes and the role changes because they show when Fresh Prince mum comes nagging at him. The genre of the music is aimed at teenagers it’s like ghetto music and cult. These features attract teenagers because the music is fast it rhymes it has a strong beat and teenagers like to think of themselves as quick because the rush towards most of the things. Also, teenagers nowadays use secret language so they like it.

In the opening shot they show the police and the wall. In the setting there is graffiti on wall, there is a throne, sunglasses a baseball cap. In the background on the wall they show tags, graffiti, spray can, police hat the uniform and adult glasses. Teenager like graffiti, they like to be royal and most boys wear caps. In the basketball scenes they set up the basketball court etc, concrete fenced, lines, tall flats, and a few unhealthy trees and also show the dull sky. Teenagers like to play basketball also teenagers see how Philadelphia is but some don’t like it because of the dull sky and the scenery isn’t that nice. In the shot they show the Hollywood sign and they set it up by showing the big green mountain with the Hollywood sign on it, they show the nice greenery site and they show the difference between Philadelphia and California that Philadelphia was boring and California is a place where there is many rich people there the site is nice and there is a lot of fame.

They show the bright blue sky and the benches. Teenagers like places where there is a lot of fun and the site is beautiful and also they like places where there is famous people living there. They show the huge significant mansion they set it up by showing the white color, grand, it’s clean, and a very important looking door. Teenagers are interested in this significant mansion because they like big mansions and they want to see how it looks inside.

The reason the “title credit sequence” was a success is because of the font. They show the font after a few shots and it appears in the centre and the audience gets attracted to the font and color because the font “Fresh Prince of Bel-Air” is large and the color is fluorescent, luminous green and baby pink. They have typed in a graffiti style and it’s targeted to teenagers. The font and color they used for “Fresh” is very big the color they used is luminous green and the background is all pink and that stands out. Graffiti is crime and its ghetto, the font and color of “Bel-Air” size is small and it is typed in italics or a different type. The color they used for “Bel-Air” is aqua blue so it looks attractive and teenagers like the colors they used.

This show has been a success and it is famous all over the world. The “title credit sequence” attracted the audience and this made them to watch it because they wanted to know how he landed up living in Bel-Air. I hope they keep on making new series of “Fresh Prince of Bel-Air” because many teenagers like it and it made people show what Black people can do as well.

Filmmaking of Fresh Prince of Bel-Air. (2020, Jun 01). Retrieved from https://studymoose.com/filmmaking-of-fresh-prince-of-bel-air-essay 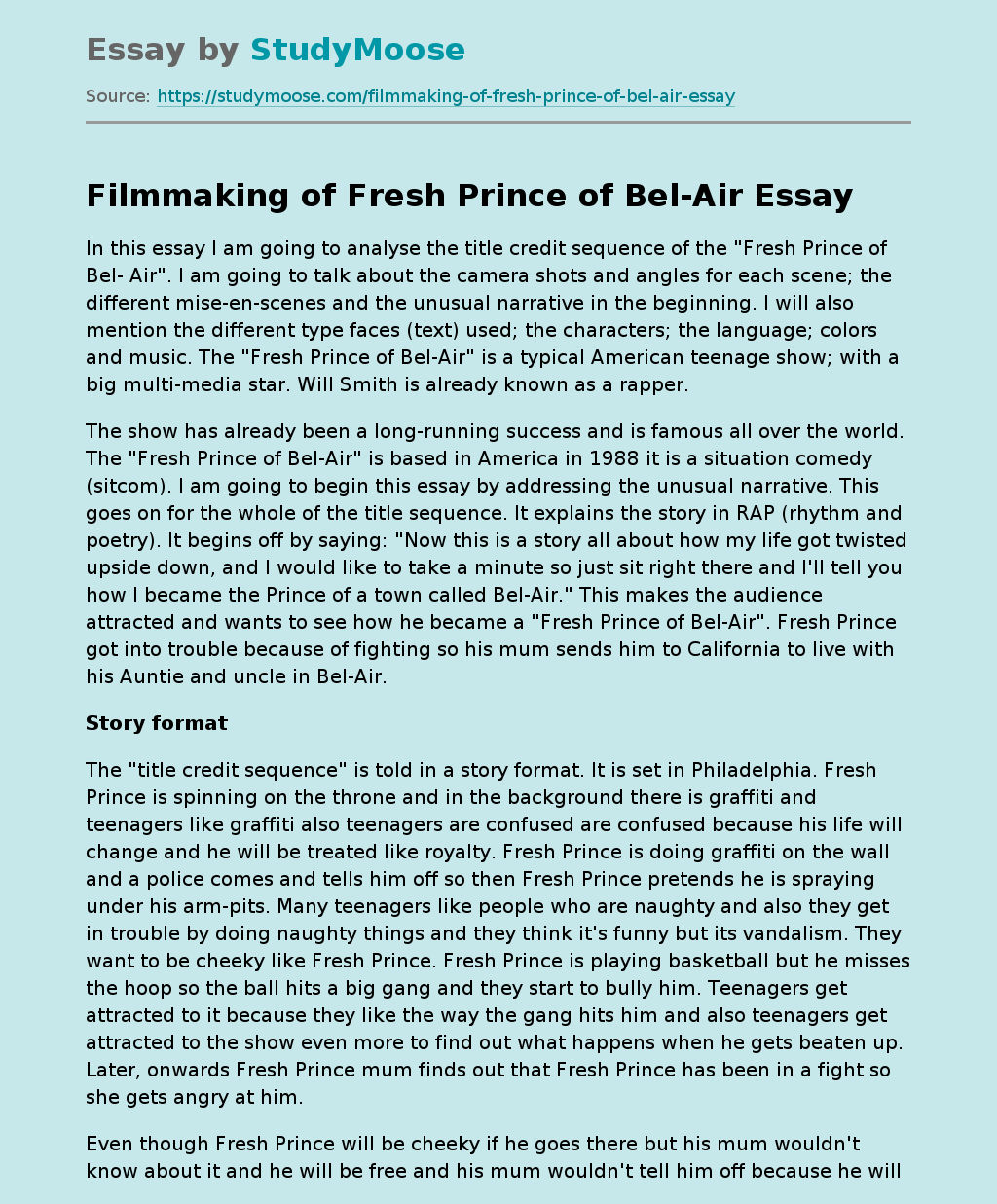