“Cinema that interests me is cinema about opening, unresolved questions and experiments.”- Tom Tykwer. The film Run Lola Run by Tom Tykwer uses distinctively visual features to create a positive effect on an audience’s appreciation of the text. He uses these visual elements to explore three major themes: chance, love and gameplay. Re-occurring motifs, split screen and tripartite structure are all examples of techniques Tykwer has used to create distinctively visual features in his film. Similar to Tykwer’s film Run Lola Run, Wilfred Owen in his poem Dulce et Decorum Est too uses distinctively visual techniques to have a positive effect on an audiences appreciation of his text.

Unlike Tykwer, Owen expresses the theme horrors of war through multiple poetic techniques to create images in his reader’s minds.

Chance lies at the core of the film where nothing is definitive. In the film Run Lola Run Tykwer expresses the theme chance through multiple techniques such as re-occurring motifs, symbolism and rapid-fire snapshots.

Throughout the entire movie, Tykwer has used the motif of spirals to represent chaos and randomness within the text. They are seen at the start of the film when the animated Lola is running; the camera is shown spiraling around Lola as she thinks about whom to ask for the money, the stairway in the introduction and the roulette wheel in the final sequence. This motif pops up to symbolize the films central message that life spirals around continuously and out of control.

Endings are new beginnings and beginnings mark the end of that which came prior.

Throughout the films three versions of events, rapid-fire snapshots of minor characters are used to pose deeper existential philosophical questions that challenge our perceptions of happenstances, causality and fate. On simple step to the left on Lola’s adventure could differ the lives of a minor character majorly. For example the lady at the start of Lola’s run could quite possibly win the lottery, become a kidnapper or even a Jehovah’s Witness.

Tykwer never lets the audience forget that the film is a race against time, clocks are used throughout the film to symbolize time and its impact on life. Lola is constantly looking at the clocks, checking the time making sure she gets the

100 000 marks to Manni in 20 minutes. Lola’s lack of time creates a developed understanding and briefness of life. Tykwer displays distinctively visual features throughout the theme chance to give a positive appreciation of the text.

The love story between Lola and Manni is what drives the film. Tyker uses red-hued scenes, split screens and extreme close-ups to clearly portray love throughout this film. The red-hued scenes in between Lola’s runs clearly demonstrate the importance of their love and insecurities as they ask each other “What would you do if I died” and responding with “I wouldn’t let you die”. The intimate red tint reinforces the love they share and how love can conquer anything.

With the use of a split screen we as a viewer see how they almost read each other’s minds when Lola is running to stop Manni from robbing the store. This portrays a special bond they share even when they are apart. The first two alternate endings end with Lola and Manni dying, we as an audience see a close up of when they are dying showing the reflection of each others face in their dying eyes conveying the refusal to allow each other to die. Tykwer clearly portrays distinctively visual features throughout the theme love to give a positive appreciation of the text.

The last important theme throughout the film Run Lola Run is gameplay. Tykwer uses film techniques such as tracking shots, animated sequence and tripartite structure to portray distinctively visual features throughout this theme. The tracking shot of Lola running with her flame red hair streaming behind her is used to visually represent that she is the main player throughout this game and has power and purpose over other characters. Tykwer uses an animated sequence at the beginning of each run to convey game like elements of her life and how out lives too can be played like a game.

Tykwer then uses a tripartite structure that offers Lola chances to win. The thesis is the first run where the journey is set up, the antithesis is the second run and is the opposite to the thesis, finally the synthesis is the third run and it is what Lola learns from run one and two that assist her in winning the game. Tykwer uses this technique to express to his audience that there are chances in life to achieve your set goals. From the three major themes, chance love and gameplay it is evident that Tykwer has effectively used distinctively visual features to create a positive appreciation of his text.

The poem Dulce et decorum est starts off in the middle of action, a battle that is not quite finished. Owen begins to describe the conditions these soldiers were in, “Bent double, like old beggars under sacks.” Owen uses a simile to express to his audience the horrible conditions these soldiers were put through. Soldiers at war are usually strong and healthy but Owen erases this image and replaces it with a “beggar” This conveys that war can cause terrible damage to ones appearance changing it dramatically. In the quote “Drunk with fatigue; deaf even to the hoots” Owen uses a metaphor but also hyperbole in this stanza to convey just how tired they were and weren’t taking any notice of the shells dropping behind them.

This reinforces the effects of war has on soldiers and how they feel whilst fighting for your country. In the quote ” he plunges at me, guttering, choking, drowning” Owen illustrates the fact that he is stating clearly, through use of onomatopoeia such as: “guttering”, “choking”, and “drowning” not only show how the man is suffering, but that he is in terrible pain, pain no human being should endure. Owen uses onomatopoeia to visually depict the effect of a gas attack on the human body and how it can cause extreme amounts of pain. This strengthens the idea that war is a horrible thing for the soldiers fighting.

This poem is extremely effective as an anti-war poem, making war seem absolutely horrid and revolting, just as the author wanted it to. Similar to Tykwer, Owen too uses distinctively visual techniques to demonstrate particular themes throughout their texts to provide the audience with a positive appreciation of the text.

Ultimately, the composers of Run Lola Run and Dulce et Decorum Est use distinctively visual techniques to convey different themes throughout their texts. Tykwer effectively expresses the themes, chance, love and gameplay while Owen conveys the horrors of war through his text. Tykwer communicates his themes through film techniques such as reoccurring motifs, split screen and tripartite structure however Owen articulates his theme through the use of poetic techniques such as metaphors similes and personification. As both texts deal with chaos in their own way, it might be suggested that the visual techniques can allow us to enter a new realm of reality created by the composer. 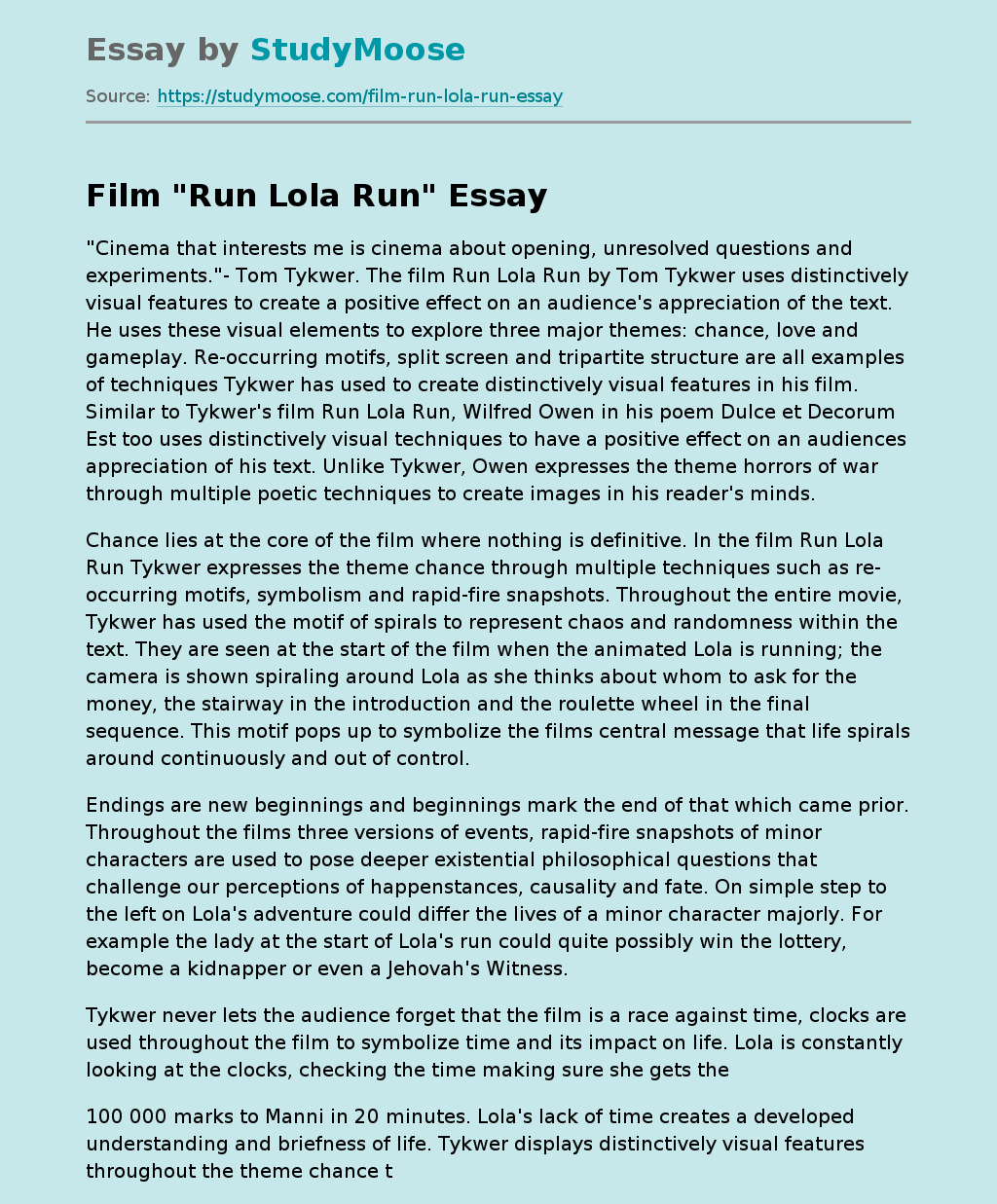