Film About John and Abigail Adams

John Adams, was gone for a good portion of their marriage and they missed each other so they start to to write letters to each other during the time of the Second Continental Congress. .A lot of the letters concerned domestic items, the managing of the farm.They wrote about the boys, and their education. Sometimes she just felt lonely and told him so in a letter. They also wrote about the home front of the war.

Abigail Adams seems to be more of a self-sufficient and self-reliant homemaker than anticipated.

Don't use plagiarized sources. Get your custom essay on
“ Film About John and Abigail Adams ”
Get custom paper
NEW! smart matching with writer

As for John Adams, he seems to express his feelings toward Abigail more in the film than in the letters. Gender issues are apparent in both the film and the letters. The film showed Abigail Adams as a woman who does not seem to have trouble with getting by on her own. It shows that abigail was a woman ahead of her time.

In the letters between them is possible to realize them opinion about the southern colonists.

Abigail did not have a chance to meet southerner colonists and this may have contributed to her skepticism about the South. Abigail’s views are made clear in a quote concerning slavery: “I have sometimes been ready to think that the passion for Liberty cannot be Eaquelly Strong in the breasts of those who have been accustomed to deprive their fellow Creatures of theirs. Of this I am certain that it is not founded upon that Generous and christian principal of doing to others as we would that others should do unto us.

” In other words how can you southern slave holders really believe in Liberty as strongly as we northerners when you deprive others of the very thing you claim to seek. Of course both her husband and herself became good friends with Thomas Jefferson, a southern slave holder, during their time on diplomatic missions in Europe so her feelings toward the south may have been ambiguous.

Also in the letters is possible to realize that he believed that independence would probably be necessary. Congress, however, was not yet willing to agree, and Adams fumed while still more petitions were sent off to England. The best chance of promoting independence, he concluded, was through the device of instructing the various colonies to adopt new forms of government following the breakdown of their provincial regimes. Through these letters the reader gains great insight into the thoughts of two important figures in American history, their remarkable strength and dedication to their fledgling nation, their mutual respect and love, and their commitment to a marriage of genuine partnership and equality.

Film About John and Abigail Adams. (2016, Apr 03). Retrieved from https://studymoose.com/film-about-john-and-abigail-adams-essay 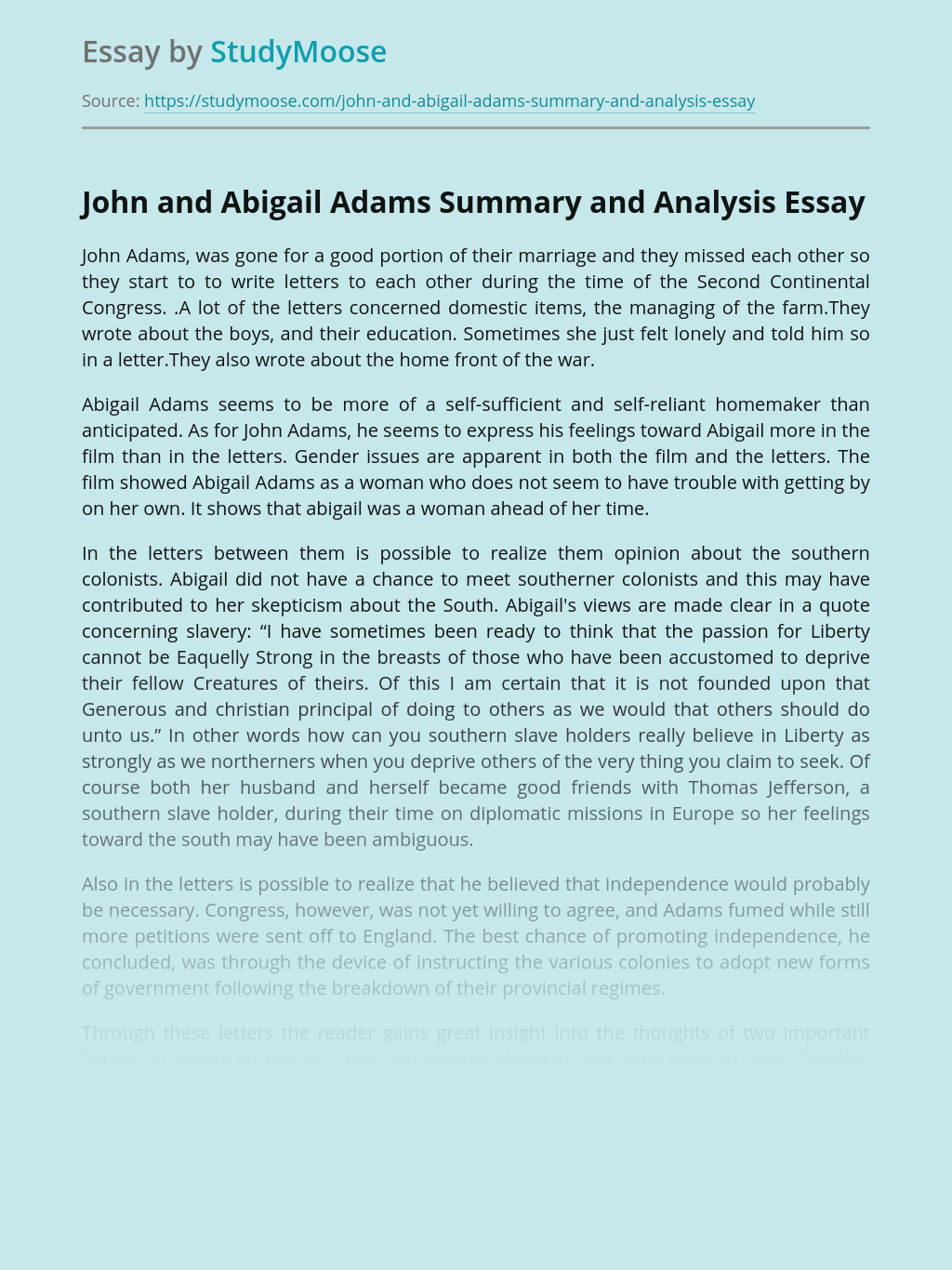