Every nationality has its own customs, traits, characteristics, values, attitudes, and beliefs that were inherited from their great ancestors. They have the possessions of uniqueness as a nation. Filipino people are one of the sole nations in the world. They have their own norms and manners. Until now, those traits are still alive and most of it is continuously transferring to the next generations. Filipinos are best well-known for being hospitable. One good example is whenever there is a visitor, it may be expected or unexpected, they really take such good care, give their full attention, and even serve foods for their visitors.

Turn in your highest-quality paper
Get a qualified writer to help you with
“ Filipino Customs and Traits ”
Get high-quality paper
NEW! AI matching with writer

Filipinos are also prominent for their close family ties. Filipinos are close to their families and relatives. They value a big family and they surely help a relative that is someone in need or who needs help. They always have a shoulder that can lean on especially during the hard times. In other countries, once an individual turns 18, it’s their responsibility to be independent and to stand on their own.

On the other hand, Filipinos are totally opposite with them because of the close family ties. One concrete example is, almost the third generation of the family still lives on the same house together with the first and second generation.

Another instance is, in every occasion, specifically Christmas, new year, birthdays, wedding celebrations, christening, anniversaries, etc. , almost all the members of the family, or even the extended families and relatives are present on those occasions. And also, the parents work hard and sacrifice much for their children, in return, the children love and respect them and take good care of them in their old age.

That’s how Filipino families are commonly defined. It is said to be that the Filipinos are clever, with retentive memory, rapid insight, and talents for arts and sciences.

They are also known for being jolly. The Filipino nation loves to laugh. In every problems and disturbances, still, the Filipino people are smiling and they still find way to laugh. They do believe in the saying: “Laughter is the best medicine. ” Filipinos are not only known for being jolly but also being friendly and chatty. They can stand talking for an hour or more just to chat and talk with their friends. Gratitude is another authentic attribute of the Filipinos. They are appreciative to those who have settled them favors or who are good to them.

Their high sense of gratitude is expressed in the phrase “Utang na loob” or the debt of honor. Another one is being courteous. They always show respect especially to the elders. “Pagmamano” is one of the things to show respect. Saying “po” and “opo” is attached to a sentence addressing someone in the third person are signs of respect. Filipinos owing to their beautiful country, liberty-loving and courageous are ardently idealistic. They are enthusiastic in love as they are violent in battle. An example is, they bravely opposed the Spanish, American and Japanese conqueror of their native country. They are one of bravest people of the world.

Filipino courage has been proven in the Battle of Mactan, Tirad Pass, Bataan, Corregidor, World War II, and in many other battlefields. Filipinos are helpful, supportive, cooperative and accommodative. They give importance to the asset of helping one another. They treasure the inherited trait of “bayanihan”. One concrete example, in cleaning a barangay, all the members of the barangay are present just to help in cleaning their community. And another one is, whenever there is calamities, they help one another to surpass the different kinds of disasters.

All the Filipinos in the different regions in our country believe in “Gaba” or karma which is one of the universal concepts among them. It may happen to those who deserted other people in the time of their needs. It may also happen to those who do injustice, unfairness, inequality, and discrimination to other people. The “bahala na” attitude or fatalism is also one of the common traits of Filipinos. If they don’t know what to do and no options in a situation, most probably, that’s the point wherein the Filipinos says “bahala na”. The other one is the “Maya na” habit.

It is an attitude wherein they will do the things later or tomorrow that should be done right now. And the last one is the “Ningas Kugon” habit. It is a manner of doing things good at first only, as it goes along it is getting worse. this habit is expressed in the phrase “Sa una lang magaling. ” The belief on “Kapalaran” (fortune) provides self-assurance and audacity to the Filipino. But even if kapalaran is not the way they want it to be, he/she can search for defense or guard and improved fortune by having “anting-anting”(amulet) that keeps him/her from bad luck.

The amulet makes the Filipino that’s someone who is not a risk taker. Now, here are some common Filipino customs. A refusal to make an eye contact implies dishonesty, the eyebrows raised in recognition and to answer “yes”, the lips are used to point things, nod upwards to greet someone, scratching one’s head when one does not know the answer. “Psst! ” is use to get an attention of someone in the workplace but not as social function. Filipinos are renowned for their toughness and flexibility.

Through the ages, Filipino people have met all kinds of catastrophes and calamities – revolutions, wars, earthquakes, volcanic eruptions, typhoons and epidemics. They can incorporate any culture and prosper in any climate. Against the hardships of life, they simply bend, but never break. Just like a bamboo tree, it merely let go with the wind, follows where the direction of the wind would go but in never breaks. Just like a narra tree, it is tough and strong. Whatever disasters it suffers, it can surpass it but it never breaks. They go with the flow of life. That’s Juan Dela Cruz is. That’s how Filipino is. 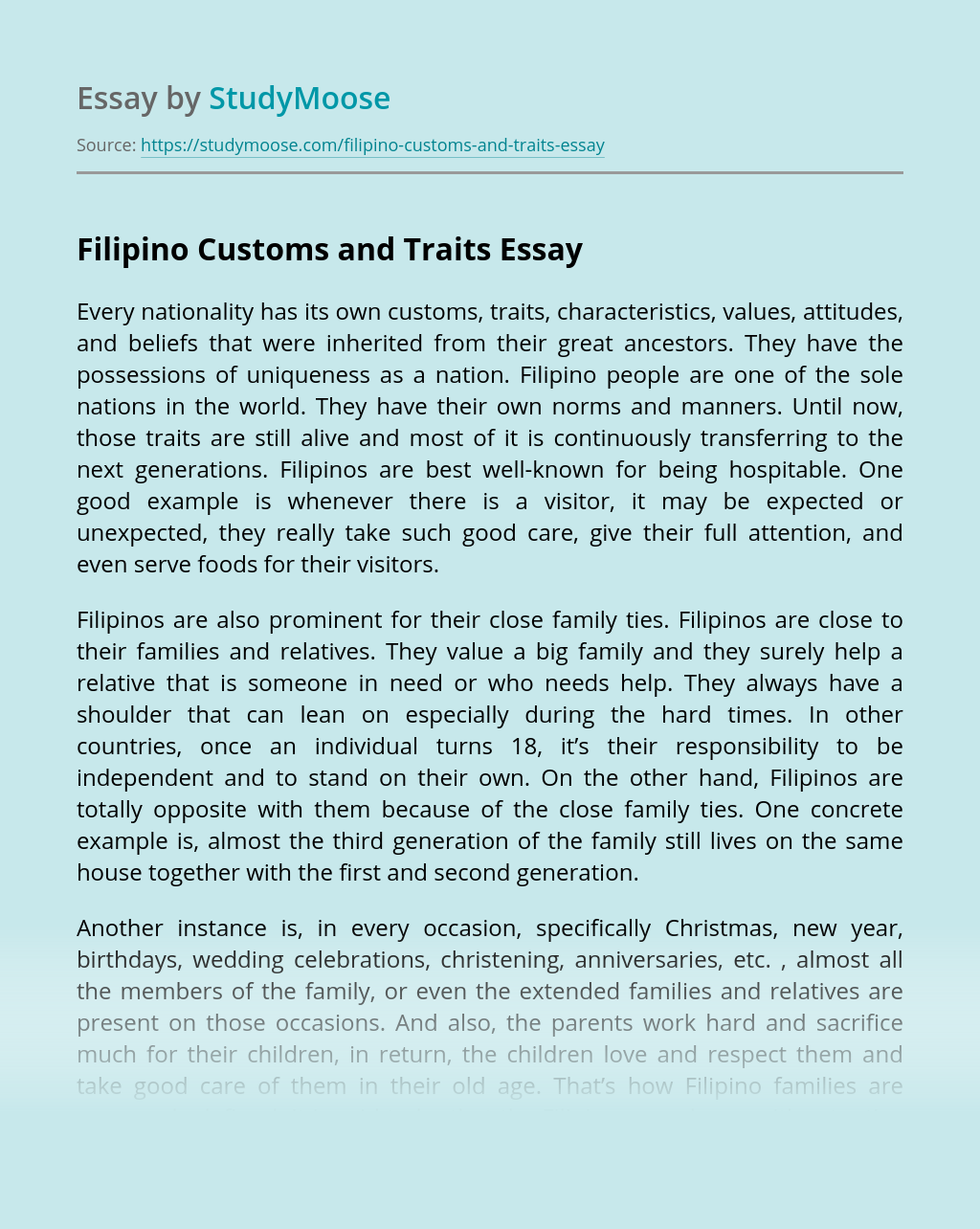 Turn in your highest-quality paper
Get a qualified writer to help you with
“ Filipino Customs and Traits ”
Get high-quality paper
Helping students since 2015
Stay Safe, Stay Original