Explain the impact brought about by the rise of Ilustrados and the Filipino Clergy in the Philippine Nationalist Movement and their influence to Rizal.

The most prominent Ilustrados were Graciano López Jaena, Marcelo H. del Pilar, Mariano Ponce, Antonio Luna and José Rizal, the Philippine national hero. Rizal’s novels Noli Me Tangere (“Touch Me Not”) and El filibusterismo (“The Subversive”) “exposed to the world the injustices imposed on Filipinos under the Spanish colonial regime”.

In the beginning, Rizal and his fellow Ilustrados preferred not to win independence from Spain, instead they yearned legal equality for bothPeninsulares and natives—Indios, Insulares, and mestizos, among others—in the colony.

Don't use plagiarized sources.
Get Your Custom Essay on Filipinization Essay Just from $13,9/Page

Among the political, religious and economic reforms demanded by the Ilustrados were that “the Philippines be represented in the Cortes and be considered as a province of Spain” and “the secularization of the parishes.”

However, in 1872, nationalist sentiment grew strongest, when three Filipino priests, “charged with leading a military mutiny at an arsenal inCavite, near Manila”, were executed by the Spanish authorities.

The Cavite Mutiny of 1872 was an uprising of military personnel of Fort San Felipe, the Spanish arsenal in Cavite, Philippines on January 20, 1872. Around 200 soldiers and laborers rose up in the belief that it would elevate to a national uprising. The mutiny was unsuccessful, and government soldiers executed many of the participants and began to crack down on a burgeoning nationalist movement. Many scholars believe that the Cavite Mutiny of 1872 was the beginning of Filipino nationalism that would eventually lead to the Philippine Revolution of 1896.

The primary cause of the mutiny is believed to be an order from Governor-General Rafael de Izquierdo to subject the soldiers of the Engineering and Artillery Corps to personal taxes, from which they were previously exempt. The taxes required them to pay a monetary sum as well as to perform forced labor called, “polo y servicio.” The mutiny was sparked on January 20, when the laborers received their pay and realized the taxes as well as the falla, the fine one paid to be exempt from forced labor, had been deducted from their salaries.

Secularization is a process by which the society is slowly transforming from that having close identification with the religious institution to a more separated relationship. This was considered to be the dawn of Philippine Nationalism, particularly after the execution of Gomburza.

The Gomburza headed the secularization movement. They advocated the right of the Filipino secular clergy over the assignment of parishes rather than giving them to the newly arrived Spanish friars in the country. The seculars were those who were not bound by monastic vows or rules. They were discriminated by the Dominicans, Jesuits, Franciscans and Recollects. The Filipino priests then were assigned as assistants to Spanish friars.

Secularism began in 1861 when the parishes of Mindanao originally managed by the Recollect friars were handed to the Jesuits. The Jesuits were expelled from the Philippines in 1768 because of the conflict they had between the European leaders. However, they returned to the country in 1861 and regain power over the Mindanao parishes from the Recollects who took over during their absence. The Recollects were bestowed the parishes of Manila and Cavite by the colonial government to appeased their loss. The original administrators of the parishes, the Filipino secular priests, naturally protested. 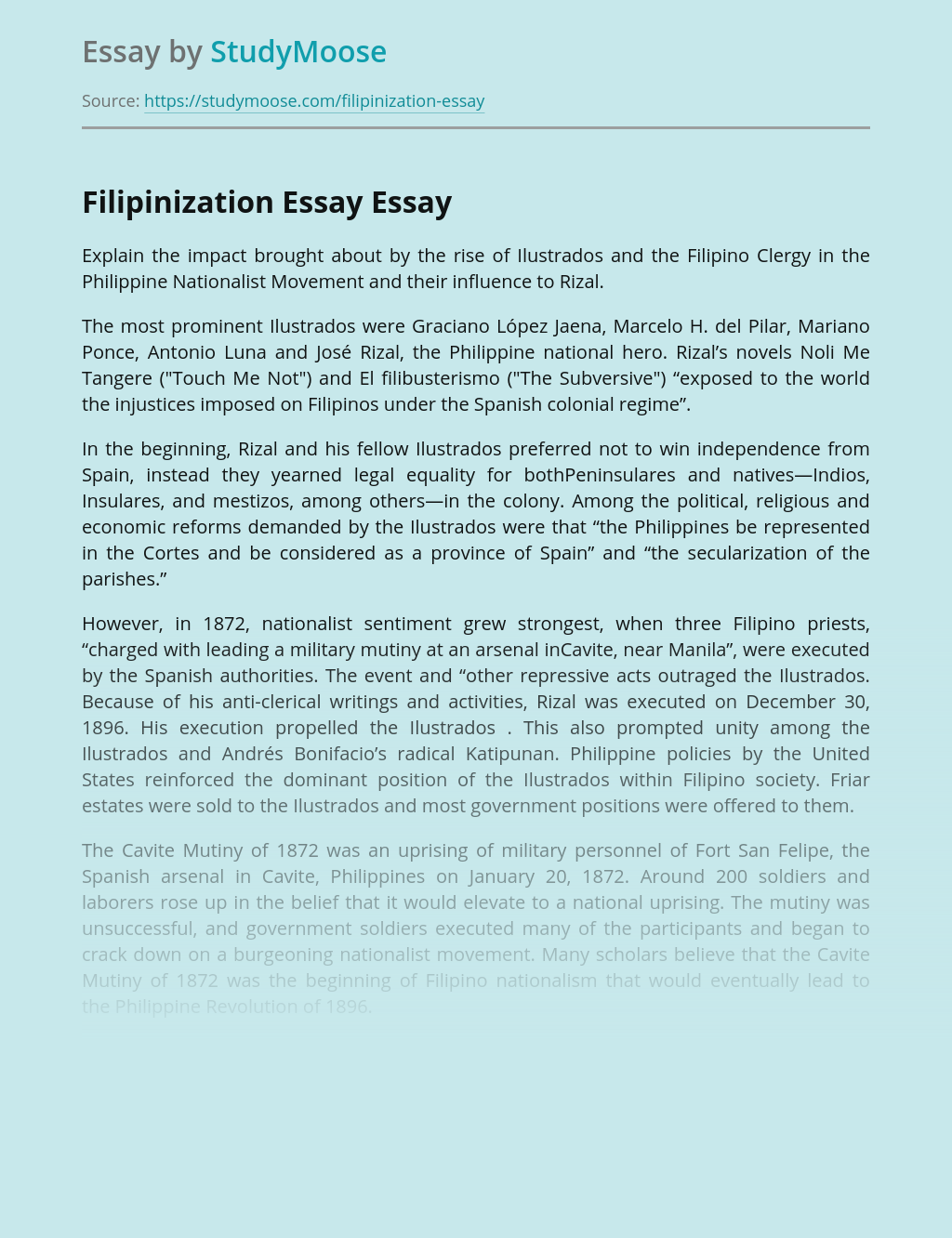 * 1. ) Filipinos are real filipinos “Paliguan mo man ang baboy, sa putikan pa rin tatampisaw. ” it is stated in the selection where is the patis that filipinos love to travel. they want to fill their senses with the sights of other countries however no matter how passionate they are, it is innate...

Unemployment rate in the Philippines

This entry gives an estimate from the US Bureau of the Census based on statistics from population censuses, vital statistics registration systems, or sample surveys pertaining to the recent past and on assumptions about future trends. The total population presents one overall measure of the potential impact of the country on the world and within...

Historical Background Between 1941-1945, Philippine Literature was interrupted in its development when the Philippines was again conquered by another foreign country, Japan. Philippine literature in English came to a halt. Except for the TRIBUNE and the PHILIPPINE REVIEW, almost all newspapers in English were stopped by the Japanese. This had an advantageous effect on Filipino...

This mission which Rizal conceived with the approval of his older brother Paciano was to observe keenly the life and culture, languages and customs, industries and commerce, and governments and laws of the European nations in order to prepare himself in the mighty task of liberating his opressed people from Spanish tyranny. This was evidenced...

Thesis Statement Conquering the town of Arayat is more than just trekking the mighty “Bunduk Alaya” but also discovering their fascinating history, savoring their tasty cuisine, celebrating their unique festivities and most of all learning more about their interesting people. I. A number of historians have proposed varied explanations regarding the etymology of the name...