Don't use plagiarized sources.
Get Your Custom Essay on Figurative Language Just from $13,9/Page

The first verse of the song sets the tone of respect and the theme of potential. The first lines of the song use multiple metaphors that read “She’s just a girl, and she’s on fire. Hotter than a fantasy, longer like a highway. She’s living in a world, and it’s on fire,” which demonstrate how this girl is just an ordinary girl but she has been able to accomplish great things in this competitive world that we live in.

The following verse also demonstrates how the ordinary girl has “stood her ground” in the competitive world. The verse contains an idiom that reads “Oh, she got both feet on the ground…Oh, she got her head in the clouds and she’s not backing down,” which states that the ordinary girl has ideas that may seem unrealistic but she will strive to make these ideas come to life and not just be a daydream. Throughout the song “This girl is on fire” is repeated, hence it is the chorus. When the chorus is on, the audience just awaits that powerful note, because throughout the song Alicia Keys puts the most emphasis on these five words. The repetition of that line demonstrates the strength and potential this ordinary girl has. Also the repetition and vibrato behind the chorus, makes the metaphor that much more powerful and believable to the audience; it is able to evoke a sense of hope in the audience for this ordinary girl. 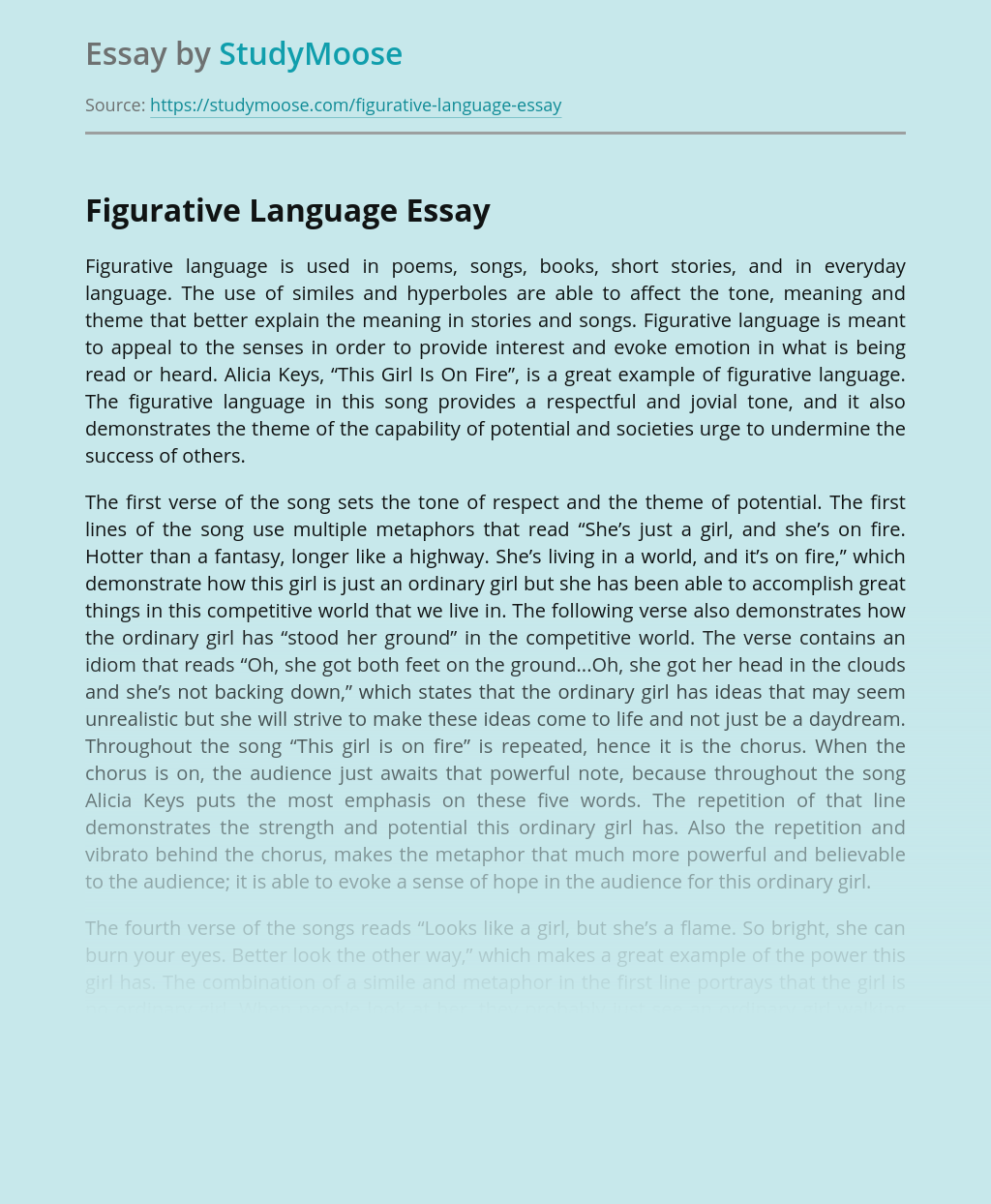 Marquis vs. Thomson on Abortion

Laugh and be Merry by John Masefield

An Analysis of Robert Frost’s Mending Wall In his poem, “Mending Wall”, Robert Frost presents two gentlemen and their yearly effort to fix a wall that separates their home. Frost uses the wall as a metaphor to represent the concept of barriers between individuals, and the repairing of the wall to demonstrate fixing a relationship...

Best Advice I Ever Had

My maternal grandpa died in 1982 when I was 12 years old. His name was Matthew Nichols, and his passing was the first significant loss of my life. He never graduated high school and was a self-taught electrician by trade, yet there were several invaluable life lessons that I learned from him. One such lesson...

In “America’s Real Dream team”, published in the New York Times on March 21, 2010, Thomas went to a big Washington party to attend the 2010 Intel Science Talent Search finals. To his surprise, Most of the finalists who came from American high school hailed from immigrant families, largely from Asia. Thomas declares himself a...