Life is like one big race that we are set out to win, with many hurdles in our way that try to stop us and test our determination, but with every failure and defeat our determination grows stronger as we ourselves grow as a person. You will learn that life is full of ups and downs, but no matter how hard life gets you down you got to get back on your feet, smile stubbornly and fight back and then maybe we will understand like the Wolfe family what it means to conquer your fears against all lifes odds to make something of yourself, to prove your worth, to make it known that you yourself are a winner.

Don't use plagiarized sources. Get your custom essay on
“ “Fighting Ruben Wolfe” by Markus Zusak ”
Get custom paper
NEW! smart matching with writer

Despite self doubts, Cameron, like all the Wolfe family, is a winner.

Cameron and Ruben have always been close they did everything together. They had been the two juveniles of the family with no purpose, until they found boxing. Cameron Wolfe wasnt exactly what you would call the type of guy girls would fling themselves at to be noticed, and he lacked the boxing skills, strength and courage his brother Ruben possessed, but Cameron had heart and determination.

No matter how beaten he was he would push himself back onto his feet, he would push until he could push no more. He wanted to prove to himself and to the people that, he Cameron Wolfe could be a fighter and maybe even a winner no matter what lies at stake, he was determined to be somebody, with Ruben at his side motivating him.

; when Cameron was fighting Ruben would be in the corner cheering him on and vice versa. It was the encouragement and love from Ruben that made Cameron a winner and also Cameron self belief, he believed he could be a winner and he believed he was a winner.

Ruben Wolfe looked like a winner on the outside, he was even a winner in the boxing ring, but yet inside his head his mind was racing with the world. Racing to be the first, racing to be respected, racing because he’s hungry for more, racing to become a fighter and not just winner. Ruben was a winner, he had the skills, he had the moves, he was tough and his combination of invincibility and good looks had the women streaming after him. But with every victory, he loses a part of himself, a part of his heart. The more he fights the more his hunger grows and devours him. He is hungry for a purpose in life, hungry for fame and fortune; he is hungry because hes looking for something to fill his hunger in life, to fill in that emptiness because he was afraid of being a loser in life and not achieving anything. I say, Dont lost your heart, Rube.

He says Im not tryin to lose it, Cam. Im tryin to find it. (pg 103)The head of the pack Mr. Wolfe was a confident man who took pride in everything he did. He was the man of the house the one that helped keep it all together, but after his fatal accident that left him in unemployment bin, his hope, confidence and pride slowly started to disintegrate drowning in a sea of darkness and despair; as being the dominant male of the family he felt like a failure as he couldnt even support his family financially and pay the bills. But he refused to give up and go on the dole even though there was only a spec of hope left. He went door knocking looking for work, as embarrassing as it was to him it was nothing compared to going on the dole, he couldnt give up this fight, because a Wolfe always fights back and has to Smile stubborn, smile with instinct, then lick your wounds in the darkest of corners (pg 17).

The toughest and fearless of all the Wolfes is Mrs Wolfe. Mrs Wolfe is the sticky tape that fixes everything, that holds everything together despite how hard things get. Even in spite of the sudden plunge into poverty; the fights about the bills, the motherly worries about her children, she will fight for her familys pride, fight to give the name Wolfe a meaning and fight against the poverty and sorrows that try to bring you down in life. 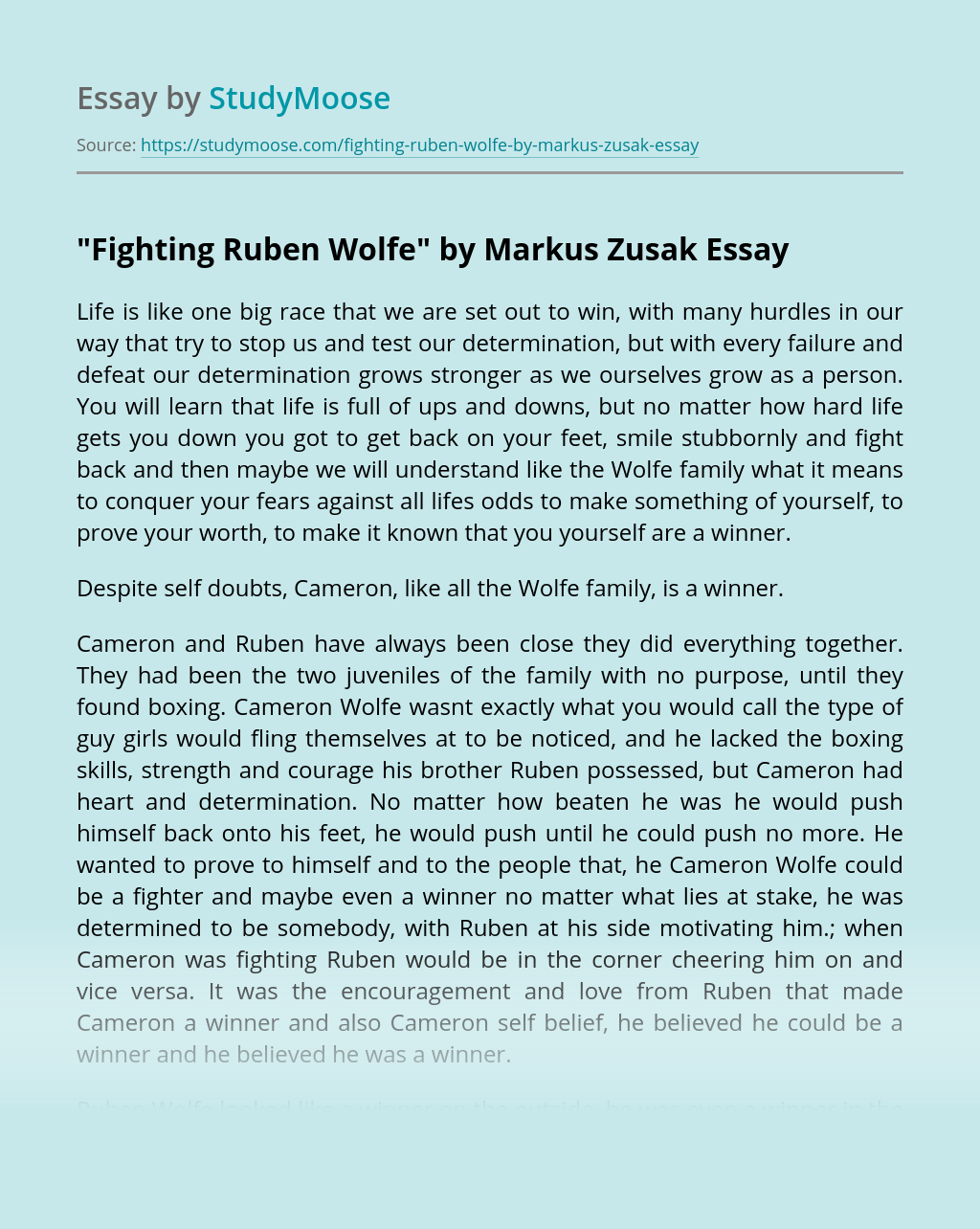