Water pollution is not a new phenomenon; it has been an issue longer than one may realize. Between 10 to 40 thousand years Archeologist would find piles of stone tools and the liter, however, the pollution in those times had little effect on the environment, as humans moved from nomadic to settled societies waste increased in magnitude and has become a more significant issue today.

Water pollution defined as a body of water that is “adversely affected due to the addition of large amounts of materials” (Krantz, 1996).

Don't use plagiarized sources. Get your custom essay on
“ Fight Against Water Pollution ”
Get custom paper
NEW! smart matching with writer

Contamination can come as a direct form of pollution, such as an oil spill. When the Exxon Valdez spilled millions of barrels of oil into the Alaskan Prince William Sound, it destroyed every habitat within that area as well as killing off many species of local aquatic wildlife (Exxon Valdez, 2010). Another direct form of water pollution is litter, undeniable, and preventable problems that can clog up waterways and choke out plant and animal life. In highly concentrated areas such as cities, sewer backup can cause significant damage to federal budgets, urban developments, and human health.

Overflows of sewage intake increased rainfall or inadequate sewage systems, but the most detrimental reason is the violation of sewage laws by humans. In the last three years, over 9, 400 out of 25, 000 sewage systems have reported traces of untreated human waste, chemicals, and other hazardous materials in our lakes, rivers, and other waterways which can cause severe damage to the environment and the health of nearby communities (NY Times, 2009). But not all areas experience the same issues.

Different parts of the United States are affected by various water problems. In addition to the stresses imposed by climate change, Arctic wildlife and peoples have faced rapid and dramatic impacts related to global climate change. The Arctic is warming twice as fast as the rest of the world. Seasonal sea ice, habitat for so many Arctic animals, is in rapid decline. Some scientists predict that it could be gone entirely by 2037. Animals dependent on sea ice habitatslike walruses, polar bears, and certain species of Arctic will face enormous challenges as sea ice continues to decrease in this region.

Fight Against Water Pollution. (2020, May 03). Retrieved from https://studymoose.com/fight-against-water-pollution-essay 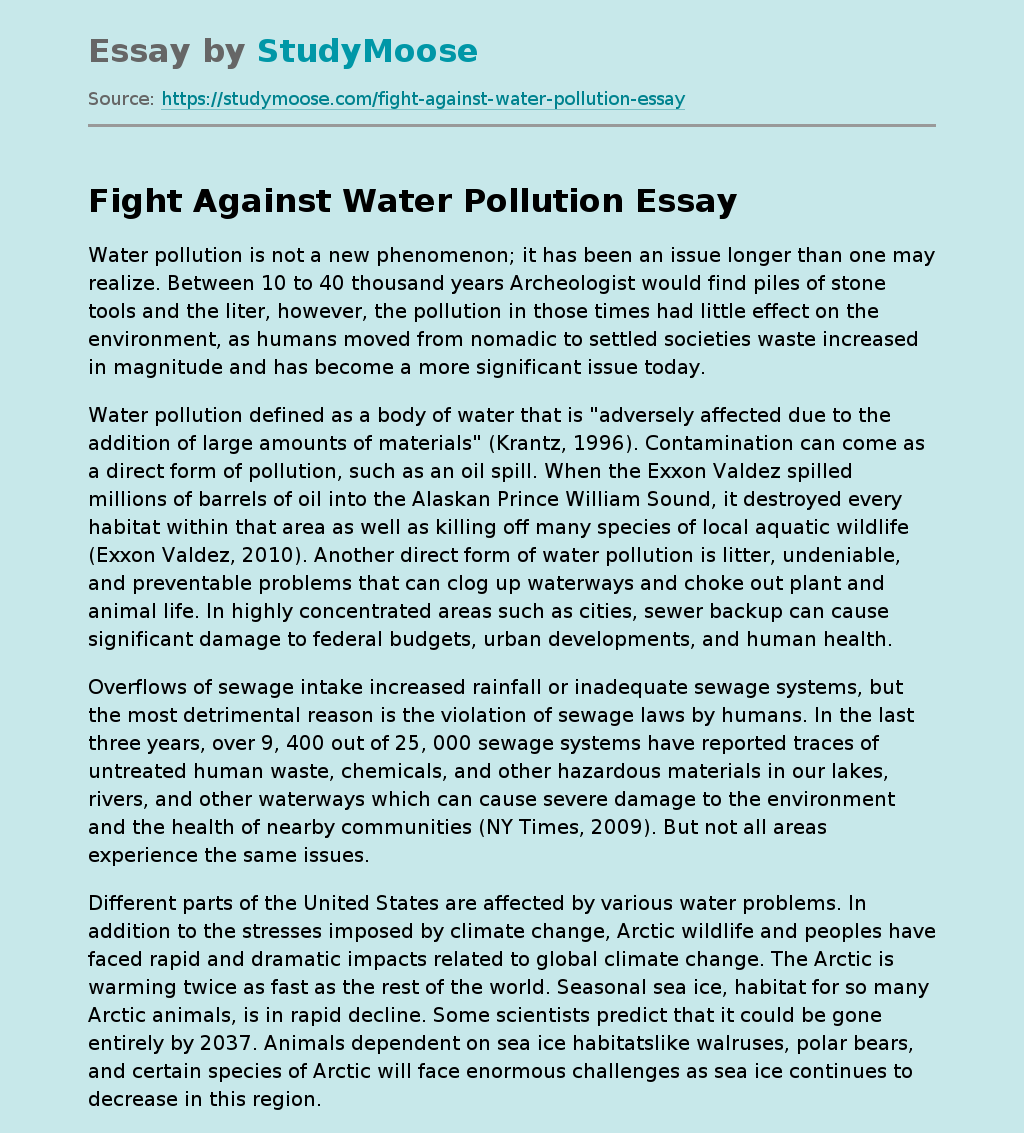