Robertson Davies wrote a novel that explores the psychological issues of the human condition and this novel is called Fifth Business. The characters in this novel often create false images and in several points throughout Fifth Business they deal with experiences and incidents in unique ways. One of the human species greatest abilities is the ability to mask emotions, thoughts and actions by lying and concealing the reality of a situation. In this classic novel, there is a constant battle between appearance and reality in most, if not in all of the characters involved.

Turn in your highest-quality paper
Get a qualified writer to help you with
“ Fifth Business ”
Get high-quality paper
NEW! AI matching with writer

Boy Staunton and Dunstan Ramsay seem to be very close friends, but they have always had a secret rivalry in their relationship that consists of jealousy and differences. Dunstan Ramsay hides how he really feels towards Diana Marfleet, and Leola Cruikshank hides who she really is to fit the standards set for her by her husband Boy Staunton. The battle between appearances and reality is shown on a number of different occasions in Fifth Business.

For example, this battle surfaces between two of the main characters, Dunstan Ramsay and Boy Staunton.

The relationship between these two is a very complex one. They appear to be both friends and enemies to each other. From the very beginning of their friendship when they were young boys, Boy is always trying to make Dunny feel less than what he is. Boy had more of an attachment to materialistic objects compared to Dunny and although Dunny never has an intention of competing with Boy, Boy sees Dunstan as a rival.

On the other hand, Dunny shows how unimportant materialistic objects really are to him.

I though twenty-four dollars was plenty for a ready made suit, and four dollars a criminal price for a pair of shoes. I changed my shirt twice a week and my underwear once. I had not yet developed any expensive tastes and seen nothing wrong with a good boarding-house. ” (Davies, 111) But as they grow up and Boy becomes a successful business man, he helps Dunstan with his financial investments by giving him advice and own personal knowledge. “I was filled with a sour scorn that I now know was nothing but envy, but then I mistook for philosophy.

I didn’t really want the clothes, I didn’t really want the girl or the booze, but it scalded me to see him enjoying them, and I hobbled away grumbling to myself like Diogenes. ” (Davies, 113) Boy spent his energy on making sure he was always above Dunny and Dunny secretly envied boy despite the exterior of friends they gave off to the world. Furthermore, when looking at Diana and Dunstan’s relationship, the reader finds yet another example of the battle between appearances and reality. Dunstan makes it appear that he is in love with Diana, when in reality, he is not.

Not only does he make it appear that he is in love with her, but he also shows just how easily someone is able to hide the truth – separating reality from appearances. Diana wants a life with Dunstan. She is ready and willing to settle down with him and start a family and because they were going to bed together, Diana was under the impression that Dunny felt the same way she did. Dunny does nothing to make her think that he does not have the same romantic feelings as she does and because of this appearances collide with reality. That did not include Diana. She seemed to assume that it did, and perhaps I was unfair to her in not checking her assumptions as soon as I became aware of them. But, to be frank, I liked having her in love with me; it fed my spirit, which was a low ebb. I liked going to bed with her, and as she liked it too I thought it was a fair exchange. ” (Davies, 81) Dunny even admits that he became aware of her feelings and her thoughts and failed to tell her the truth for his own selfish reasons.

He states that he liked having Diana in love with him to boost his own self-esteem and he also admits he hid his true feelings because he liked going to bed with her. Dunny’s defense for his decision is his age. “I was too young to be truthful about such a matter” (Davies, 83) Thus, this relationship shown in Fifth Business shows that the ability to hide reality with a different appearance is easily attainable. Another example of this battle between appearance and reality is shown in the constant self-identity fight going on within Leola Cruikshank.

In this situation, Leola is pressured to change who she is to fit to the extremely high social standards of her husband, Boy Staunton. Boy is constantly tearing his wife down by behaviour such as dressing Leola differently, making her learn a new language and changing her small town girl persona to that of a high society woman. “She did not see why she should become stuck up and talk as she had never talked before, and behave in ways that were unnatural to her. ” (Davies, 144) Reality is fighting appearance in this situation.

The reality of the situation in Boy and Leola’s early years of marriage is that Leola was just being herself, and Boy made it clear that that was not good enough. Before Boy shaped her into someone different, Leola’s real, natural personality made a regular appearance. “If Boy let her shop alone she always came back with what he called ‘another Mary Pickford rig-out’, and if he took her shopping in Paris the session often ended with tears, because he sided with the clever shopwoman against his indecisive wife, who always forgot her painfully acquired French as soon as she was confronted with a living French creature. (Davies, 144) Leola cannot handle the pressures of trying to please her husband by being somebody who she is not. Leola ends up crying and slowly starting to hate her life and herself for not being able to maintain her high social reputation. She is unable to maintain the appearance Boy had created for her and reality is shown after Leola’s suicide. The theme of appearances versus reality rises in Fifth Business quite often.

This conflict is shown through Dunny and Boy’s relationship, as they seem like friends, but on the interior they have secret rivalries against each other. It is also shown when Dunny fakes his feelings for Diana and lastly, it is shown in Leola’s act to be the perfect trophy wife when in reality, she is not. The characters in Fifth Busniess often create false images and pretenses seperating the appearance of a situation from what they actually are in reality and because of that, Robertson Davies novel Fifth Business shows a great contrast between appearances and reality. 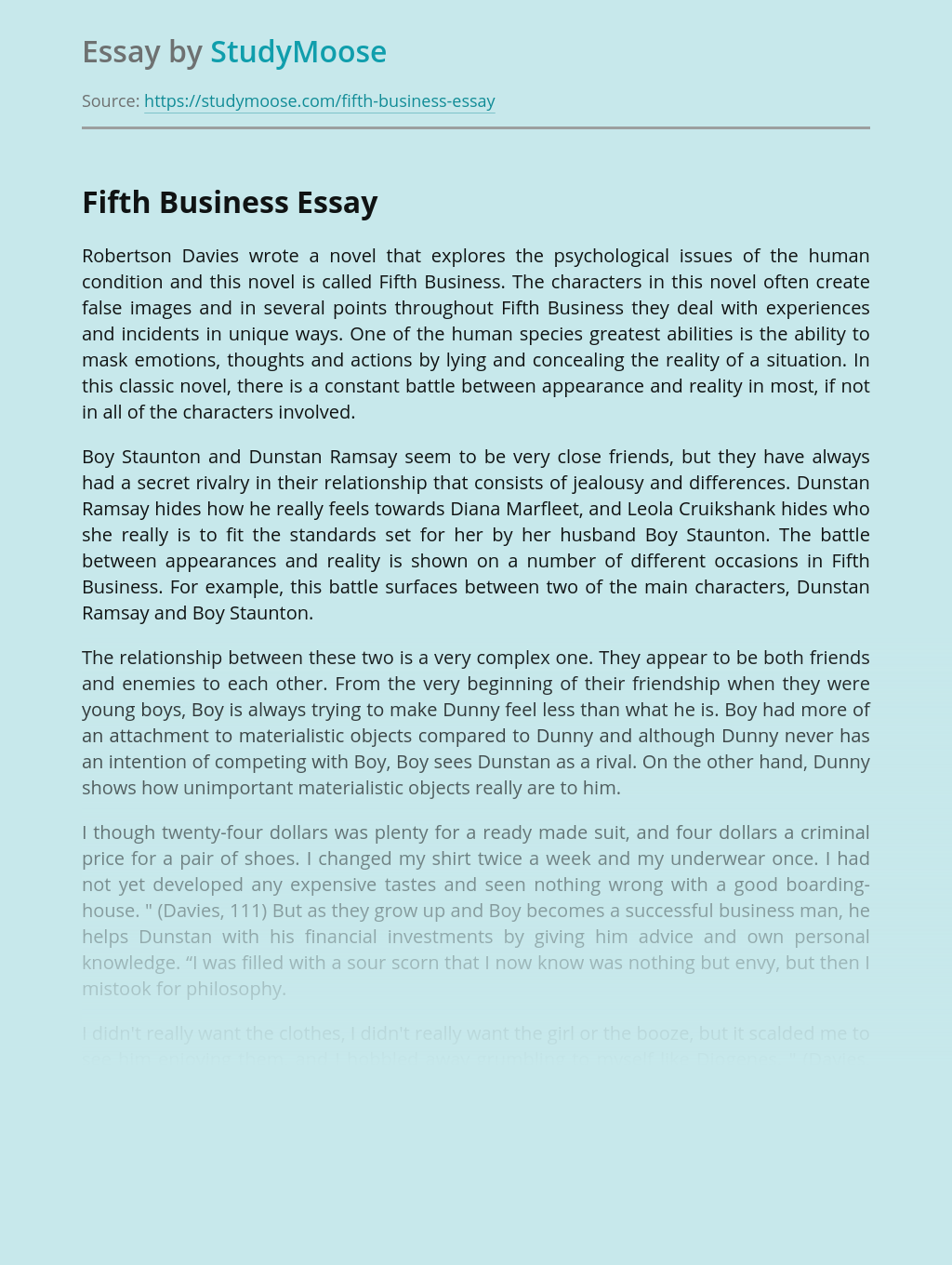 Turn in your highest-quality paper
Get a qualified writer to help you with
“ Fifth Business ”
Get high-quality paper
Helping students since 2015
Stay Safe, Stay Original