5 – Write a Facebook apology to your opponent praising them for their brilliance.

6 – You must kiss the feet of your opponent.

7 – You must make your opponent a tasty sandwich.

8 – You must be the slave of your opponent for an hour.

9 – You must eat a tablespoon of various kitchen ingredients of your opponent’s discretion.

10 – You must send a Moonpig apology to your opponent

11 – Winning player gets 11 minutes on the losers Facebook to do whatever they wish (No changing passwords). Whatever is put on there has to stay for at least 11 days.

Don't use plagiarized sources. Get your custom essay on
“ Fifa 13 Apology Rules ”
Get custom paper
NEW! smart matching with writer

12 – You must play the next game fully naked

13 – You have to go to your next door neighbours and start describing the game in its full detail, minute, by minute and where fundamentally you went wrong, if they shut the door move on to the next house and pick up where you left off.

14 – The person must wear a custom t-shirt, designed by the winner, it must have on the back, ” I lost by 14 on Fifa 13 ” on the front, it can have what ever the winner desires.

The loser must then walk around town explaining to 14 different people why they have lost so badly and get them to sign the t-shirt. A picture must then be uploaded to facebook with the T-shirt on for further abuse.

15 – You must send a letter to FIFA explaining in great detail why you lost by 15 goals.

Miss an open goal with torres, the player has to buy 50 freddos and then bin them

Score a hat-trick with Joey Barton and you get to give your opponent a ‘friendly’ jab on the arm.

Score a hat trick with Park Ji Sung and your opponent has to run everywhere he goes, instead of walking.

Score a hat trick with Andy Carroll/Neymar/Lucas Moura and your opponent must go into a shop and pay more for an item than it is worth.

Score with a hat-trick with Gabriel Heinze and your opponent has to make you some beans on toast, using Heinz beans.

Score a hat trick with Dimitar Berbatov, and in the next game you play against your opponent, they cannot use the sprint button.

Score a hat trick with Eric Abidal and your opponent must donate a minimum of £5 to a cancer charity and say why they are doing it. Why not help at the same time as embarrassing them?

Get a man sent off while playing as Arsenal and you must play the remainder of the match blindfolded. If Wenger did not see the incident, then neither shall you.

Score a hat-trick Joey Barton and your opponent must go to the nearest supermarket and purposely knock a shelf off and run out the shop!!!

If you score a hatrick with John Terry you have the right to shag your opponent’s girlfriend!

If You Concede 5 To Zlatan Ibrahimovic, you must grow your hair for 6 months.

Score a goal with your goal keeper (without changing position) and your opponent must do a lap of the nearest estate in only their boxers.

If you rainbow flick the ball over the keeper and score your opponent must buy you 2 regular sized packs of skittles.

Score the winning goal with ryan giggs against arsenal and your opponent must run through the nearest public area swinging his t-shirt around in the air.

Score the winning goal with Rio Ferdinand against Chelsea and the opponent has to buy all the choc ices out of the nearest shop and walk the streets giving them away!! (Supermarkets excluded)

Score with a hat trick with Emmanuel Adebayor against Arsenal – Your oponent must run the full length of the garden and powerslide, regardless of the weather conditions, while all others present pelt with rubbish and leftover food.

Score a hattrick with Stephen Ireland and your opponent has to stand in public with their pants down, wearing pink underpants (or superman boxes) & ask to have people stand in photos with them for 30 mins

Score five goals with Balotelli and your opponent must hand out monopoly money to randoms on the street saying “I’m rich, I’m rich have some money” for 30 minutes.

Score 5 with Georgios Samaras and your opponent must refer to you as Jesus, for a whole week.

Score five with Robin van Persie vs Arsenal and your opponent must dress up as batman and wear a sign that says “just got raped by robin” for 30 mins in the nearest shopping centre.

Play as the Korean Republic team and win by 5 goals and more and your opponent must do the full “gangnam style” dance in a public place. 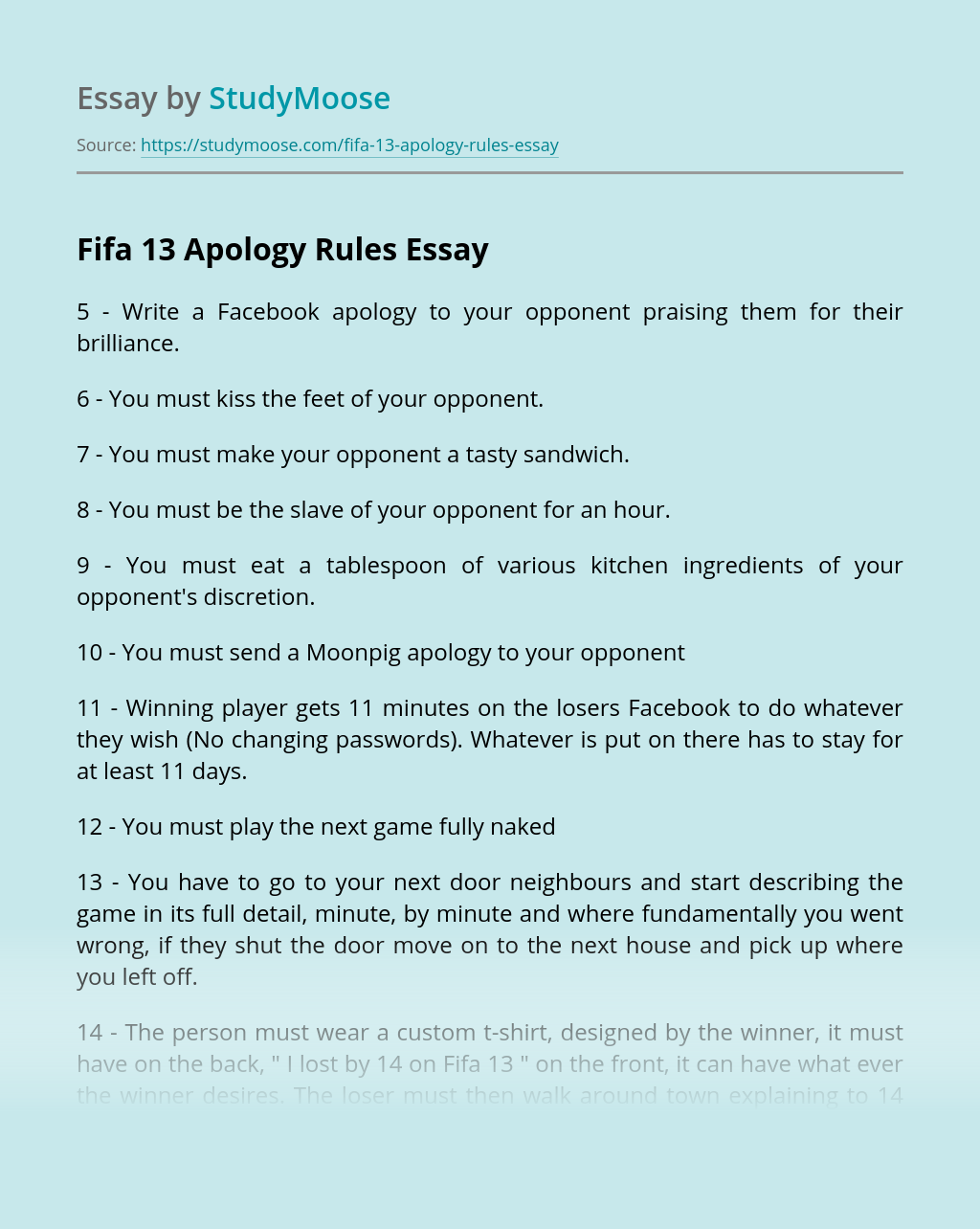