Don't use plagiarized sources. Get your custom essay on
“ Fidel Castro and Cuban Revolution ”
Get custom paper
NEW! smart matching with writer

In order for any revolution state to be successful, having strong leadership or group of leaders, is crucial to prosper. “Similarly charismatic leadership is not just an issue of personal leadership style; it has implications for the behavior expected or demanded from the leader’s audience” states Brett Hoffman (2016). Maintaining the interests and support of the citizens, can make or break a revolutionary streak. In Cuba’s defense, having a charismatic strong leader such as Fidel Castro, was in the best interest of the states’ success.

Like any functioning society, the working class plays a key role in production and labor by keeping a relationship with the government. The Cuban working class, did not specifically differentiate between the government as a dictatorship or as a republican bourgeois, but rather as an institute that was heavily invested in their best interest (Ranis, 2017).

The dictatorship and tyrannical use of governance, led to Fidel Castro and his supporters to rebel against the regime. The presence of guerillas and Batista’s regime lead many Cubans to believe they lived under a capitalist state dictatorship. In order to oppose the Batista regime, Cuban businessmen and industrialists were called upon in support for a new national liberal agenda.

The support of the rebel army’s political demands, was hard at first, however, seeing the corruption which was at large during Batista’s reign, Cubans were ready to support the people willing to take him down. After Fidel Castro took power, the issue on hand was acting on U.S. antagonism and militaristic investigations, which would drastically change their diplomatic relations. Having strong militaristic leaders such as his brother, Raul Castro, Che Guevara and Camilia Cienfugos, the revolution was revolting, from having such robust support on all sides. Castro had a vision of tearing down the old Havana, which stood in favor of the former dictator, and creating a new Havana; a new perspective on Cuba.

Fidel Castro played a key role in keeping Cuba from falling apart, even after the fall of the Soviet Union which had significant economic ties with Cuba. Through military support and having a leader such as Fidel Castro, Cuba was able to sustainably progress its government and other movements, as a counterweight to the reactionary thrust of U.S. international policy (Hammond, 2017).  While Castro was still in power, the only issue was the revolutions original plan of following the socialism model, start to deteriorate. What makes Fidel Castro so powerful and strong, was his ability to stand up to the U.S. imperialism which was taking over many nations across the globe.

Fidel Castro stepped down from power in 2006, due to his deteriorating health, but still was on the sidelines, ready to help his successor, his brother, Raul Castro. This shows that regardless of the troubles and situations Fidel Castro was put through, his main goal in life was to see Cuba, his homeland, succeed and remain independent. Castro exemplified what a true leader exhibits, in order for a revolution to flourish.

The passing of Fidel Castro in November of 2016, spoke for itself. Cubans lined up in the streets, mourning the loss of Cuba’s most respected leaders. Citizens grieved and said their final goodbyes, as the military paraded around Havana, prior to performing the final rituals. One can argue, that there have not been many leaders across the globe who have gained respect and support for numerous years, from its citizens, even after stepping down from power, as Fidel Castro did. His resilient, charismatic, leader characteristics, pulled Cubans more towards him and his regime. Though many would also argue that, Fidel Castro’s role was very dictator like, similar to, Fulgencio Batista; primarily due to his tactics and strong militaristic ties. Regardless of what Fidel Castro believed in, or lead Cuba towards, his success as a leader spoke volumes. Through the revolution, and primarily post 1959, Cuba started moving up and out of low levels of poverty and illiteracy. The progression of Cuba came and went, however Castro’s support from the people remained.

Cuba has the ninth largest army in the world, containing soldiers who have been deployed as mercenaries in the longest warts of conquest (Montaner, 1994). Often, Cuba is referred to the land of spies, due to the large number of individuals who escape there who come from drug cartels and/or mafia’s. Nevertheless, of having a powerful leader, issues that directly affected the Cuban people, is what caused a drift between Fidel supporters and enemies. Having poor housing, transportation, food and resources caused the state to deteriorate, as a functioning society. The state itself still stands intact for the most part, due to its militaristic ties and relationships between certain allies. Cuba’s economy still heavily relies on sugar importation and exportation, along with Cuban cigars, which are incredibly popular in the United States, along with many other countries.

Cuban civilians rose up in revolution against neocolonialism, which was heavily imposed by the United States on them. Facing issues such as having 20% unemployment rates, along with having high rates of underemployment, were causing Cuba to struggle without having an independent foreign policy (Segrera, 2011). The Cuban Revolution took a big hit to the foreign policy which Cuba directly has links with other countries regarding domestic politics. The fear of having cultural identity crisis, were being threatened to the Cubans. Due to this epidemic, the United States broke off their diplomatic ties with Cuba, launching the invasion of Bay of Pigs, also known as, Playa Giron (Segrera, 2011). This left Cuba with no other option, besides join the Council for Mutual Economic Assistance which was an alternative market for the island, which also helped in supplying weapons if necessary for its defense (Segrera, 2011). As a result of the Soviet Union collapsing, Cuba got hit with a huge economic crisis which caused disruption between Comecon in 1989. Though, Cuba could recover during the 1990’s, the failure of “real socialism” disrupted the state from achieving a gross domestic product (GDP) from 1989 until 2006 (Segrera, 2011).

Many Cubans invested their hopes to move towards a rather twenty-first-century socialist approach, similar to China’s. Segrera suggest that Cuba can achieve that goal if a focus is put on a few characteristics, it can be possible. One of them being, preserving the state ownership of economic and social services such as education and healthcare. Having self-management and cooperation, while reducing the state economy, and promoting decentralization (Segrera,2011). Post Fidel Castro leaving his seat of power due to his failing health, the Cuban people were to replace a charismatic leader with having more dismantling political order. ‘Charismatic socialism was replaced with bureaucratic socialism’ states Bert Hoffmann (2016).

As Raul Castro took his position as the new Cuban leader, his objectives were stated loud and clear. Castro’s goal included the country’s focus on being the only communist party, wanting Cuba to become a bureaucratic institutional (Hoffman, 2016). The existence of the Communist Party Congress, is the states supreme guiding force in the society and state (Hoffman, 2016). The dismantling of the ‘battle of ideas’ which had been placed in Fidel Castro’s 2000 campaign slogan, which had helped reconstruct Cuba and its economy, caused conflict between the new political ideology. Since Raul came into power, there have been accusations of corruption and deceit, since these funds were disappearing to party and state institutes, rather than what they were initially made for; the people (Hoffman, 2016).

Following the Cuban Revolution in 1959, Cuban politics saw a shift, in regards of media and communication. The Communist Party was now in charge of expropriating private mass media across Cuba (Hoffman, 2016). The Cuban government has gone to all extents to try and decentralize the media operation of any foreign media, especially the United States sponsored, such as radio, television and more recently the internet. As a result of this, twenty-two years ago, Cuba became the last country in the western hemisphere to join the internet, in the year 1996 (Hoffman, 2016). The Cuban regime showed true authoritarianism by limited media linearization across the country. Restricting internet access, at a slow place, still get around to citizens, like China.

After Raul Castro’s presidency, the first vice president of Cuba, Miguel Diaz-Canel, became his predecessor in April of 2018. Though Raul faces old age, he remains the head of the communist party in Cuba, which shows that the Castro’s are committed to their country. The military have approximately 80% control of Cuba’s economy, has been in support of the communist ways of governing. Prior to Donald Trump becoming president, former President, Barack Obama, tried and almost succeed to patching up old ruined relationships between Cuba and the United States. Unfortunately, the new president did everything in his power to undo everything done on the international diplomatic platform, by former presidents. Though Cuba may finally not have a Castro running the country, similar morals and beliefs remain. For example, the rejection of capitalistic ideologies, and promotion of communistic approaches remain prevalent till today. It will be interesting to see how the new Cuban leader, will either progress as a successful communistic country, or not. 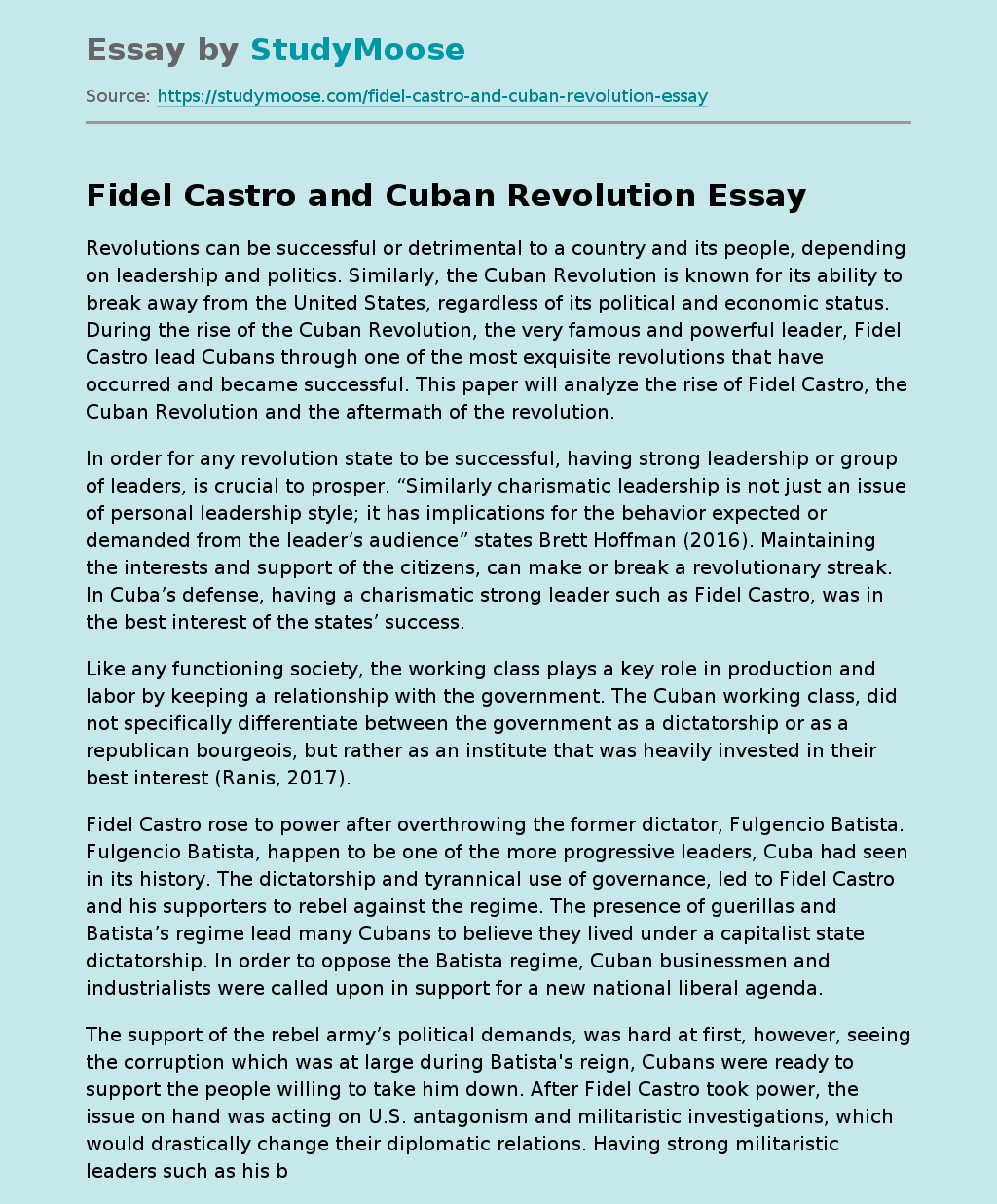