“The Lottery,” written by Shirley Jackson and “The Rocking Horse Winner,” written by D.H. Lawrence both use the stories settings in contradicting ways in order to present the seriousness of the stories. Jackson used the setting as a way to sidetrack the readers while Lawrence used the setting to construct the story. Setting is an important piece in any story and is extremely true in the two short stories that are about to be shared.

In “The Lottery”, the setting is used by Jackson in an effort to distract that reader.

Don't use plagiarized sources.
Get Your Custom Essay on Fiction essay thesis and outline Just from $13,9/Page

By distracting the reader by using beautiful memory visuals, the author is able to formulate an ironic ending to the story. The setting is illustrated to be warm, bright, happy and peaceful. Some readers may suggest that the scene is pleasant and in a certain way, suspenseful. The author described the day to be “clear and sunny, with the fresh warmth of a full-summer day.” (Jackson p.250) Jackson used the specific description in hopes to create a harmonious, calm and amiable scene for the readers.

This calming mental picture of the atmosphere made the readers believe that the story will have a happy ending. The characters also played a role in throwing off the horrific ending. Throughout the story, the character all remained calm and happy. As the readers continue to read the story, they soon realize the truth about what is truly about to happen. This deceives the idea of a perfect ending. The portrayal of the buildings, town and the lottery box all added to the setting that throws readers off track of the gruesome reality of what is going to happen.

In “The Rocking Horse Winner”, written by Lawrence, the setting is the center of the short story. Lawrence also used real life places throughout the world and London to help create the setting in short story. The author also used real life events and hobbies to help the reader really feel involved in the story and not feel the need to try very hard to mentally visualize the setting. Lawrence outlines the characters struggles to constantly be competing with the neighbors. The in-depth description that Lawrence uses of the house and gardens paint a picture of the conflicts of income and actual lifestyle. The mood and environment fit well with this story setting. There is not a lot needed from the author to paint the scenery. Since a lot of readers have personal experiences with horses, the readers are able to read and understand without much thought. As soon as a reader can relate to an event, the little details are not needed to pull the reader into the story.

There is one similarity and a few differences in these two short stories. The one and only similarity of these two short stories is that in both of these short stories, the settings are reasonable, realistic and convincing. The settings in both stories are either real locations or places that have a huge possibility of existing. In difference, Jackson used the setting to distract the audience from the gruesome, shocking and horrific ritual of stoning that was about to take place. The readers were all swayed from this reality until the end of the story. Contradicting, Lawrence incorporated the setting into the story and used vivid descriptions to allow the readers to add their own memories. Lawrence created the setting in an effort to draw the readers in as the story unfolded.

Fiction essay thesis and outline. (2016, May 07). Retrieved from https://studymoose.com/fiction-essay-thesis-and-outline-essay 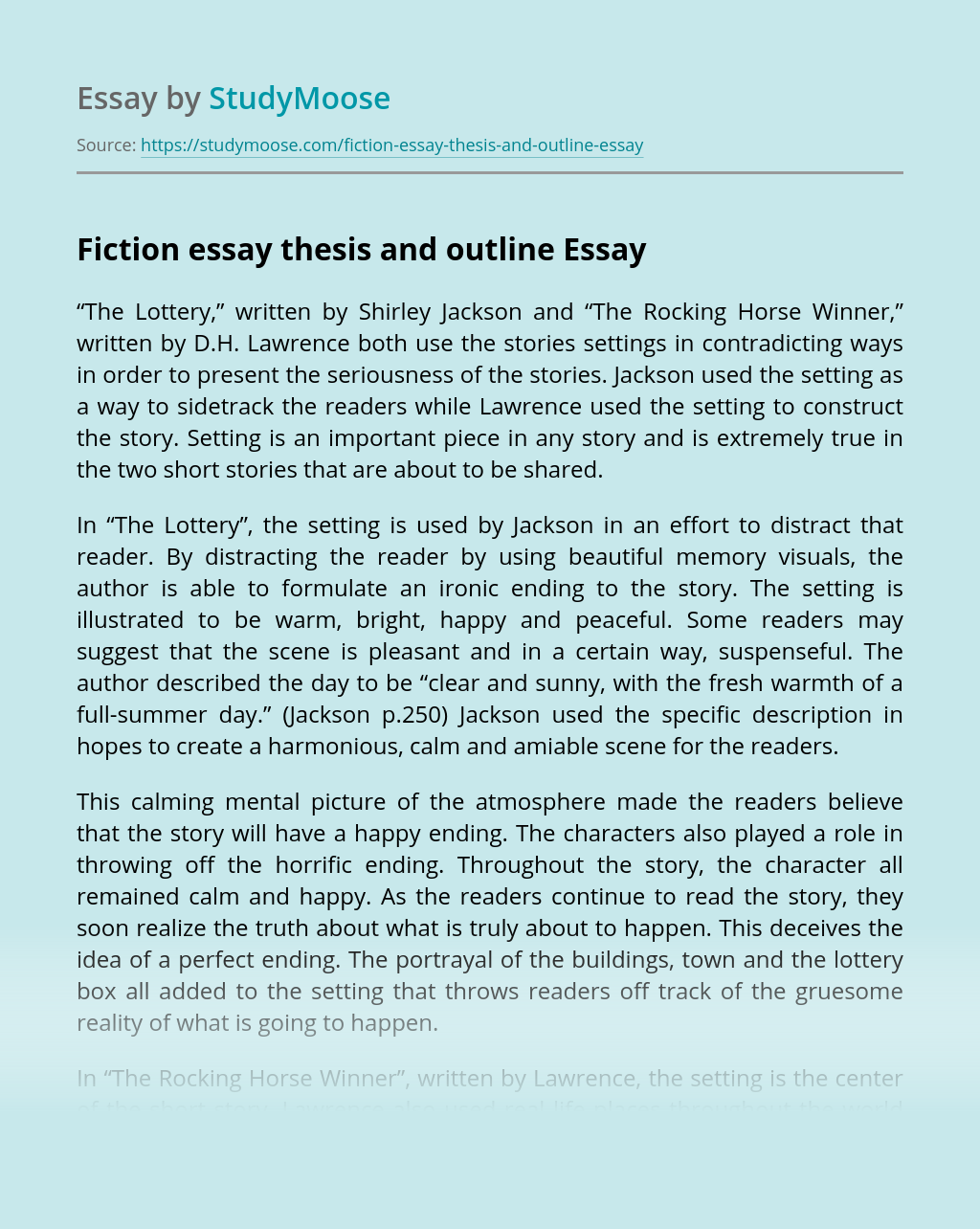 Summary of One Article from Wall Street Journal

In the business world of today, series of economic activities and businesses are conducted through various means that significantly affect these businesses. Advertisement is one of the means of conducting businesses in today’s business environment. Companies try to attract old and new customer in different means using advertisement. The internet is an example of the... VIEW ESSAY

Although, telemedicine has proven a great tool for the health promotion in recent healthcare system, there are some limitations to it such as the absence of the physical examination; varying state practice and licensing regulations; reimbursement policies and limited technological knowledge-base. Limitation in physical examination Although, telemedicine can be very effective for many minor conditions,... VIEW ESSAY

Sasol Limited is a gas station that was formed in 1979, it is a combination of an energy and chemical company. There is about 31 270 people working for Sasol in 32 different countries. Sasol has remained one of the largest investors in skills development, capital projects and technological research and development since it was... VIEW ESSAY

Ralph Waldo Emerson was born in 1803 in Boston although his family were not wealthy they were well connected, privileged and educated. Emerson attended Harvard, Harvard Divinity School and became a minister interested in such topics as non-conformity, the individual and the soul. Frederick Douglass was born in 1817 in Maryland the son of a... VIEW ESSAY

My science project is on the No Light Lava Lamp. I will record what happens when I mix vegetable oil and water in an empty water bottle. Most materials are classified into two different categories in relationship to the way they mix water. Hydrophobic substances are chemically unable to mix with water (the word hydrophobic... VIEW ESSAY