The Irony of the Kurt Vonnegut’s Works that Can be Seen in the Welcome in the Monkey House and Who I am this Time. Kurt Vonnegut is one the best writers in the world. He is one of the post modernism’s writers. He is best known as the author of Slaughter-Five. Kurt Vonnegut wrote of satirical novels whose central theme is life’s cosmic joke on humanity. Vonnegut also a science fiction author and he is known as a dystopian writer’s.

Don't use plagiarized sources. Get your custom essay on
“ Fiction and Monkey House ”
Get custom paper
NEW! smart matching with writer

Some of his famous works is the collection of ‘Welcome to the Monkey House’ and ‘Who am I this Time’. Both of the stories tell about life’s cosmic joke on humanity. Now, I will describe about the irony of the Kurt Vonnegut’s works that can be seen in the Welcome in the Monkey House and Who I am this Time. Welcome to the monkey house is the collection of the short works by Kurt Vonnegut.

And Who am I this Time is one of the collections among the short story in the welcome of the monkey house.

Who am I this time is told about some one who can play many characters in the drama. The narrator is good actor; and he is a director too he can play many characters that expected to him and he is a director too, and Harry Nash is the biggest actor that the club has. Firstly, he got a character as a salesman of storm windows and doors, and he said that the highest rank that he ever held on stage was either butler or policeman.

After that, the narrator meets with a pretty girl that is Helene Shaw and asks her to play the Stella’s character.

Harry Nash is good actor too, even somebody said that harry ought to go a psychiatrist so he could be some thing important and colorful in real life. He like lost anything, and one time he said that “who am I this time? ”. When the play of this story, Helena Shaw cannot plays Stella’s the character as well as expected to her. And the director searched a new one to play Stella’s character. But in the end, she can find the character and can play it well. The narrator said that “the part of Stella is yours”. And Harry and Helena play the character together.

Finally, they married and said one thing to the narrator “Who are we this time? ”. In the Who am I this time, the author made us think to differentiate the real life and the acting. The author can separate the two worlds but it is like allied. It is the irony that, the character of this story, that is Harry Nash and Helena Shaw can play the character in the play, but they can play their character in the real life. It can be seen when Harry Nash plays the character of Abraham Lincoln, he can make his spouse fall in love with him, as a Harry Nash and as Abraham Lincoln.

And in the end of the story, there is another irony that is when Harry Nash and Helena Shaw get married. They said that “who are we this time”, it means that they will play many character in their life until they die. There is another story of Kurt Vonnegut that contain of Irony element in the work that is Welcome to the monkey House. Welcome to the monkey house is containing of irony element too. In this story, sex which is the natural behavior of human is forbidden by the government.

Welcome to the monkey house told about the condition in the future which is the world has over population. This is the time when the population of the earth is 17 billion human beings. That is too many mammals that big for a planet that small. The people were virtually packed together like drupelets . And Billy the Poet who is a person who refused the ethical birth-control pill, so, he will got the penalty for that that is $10. 000 and ten years in jail. The world government makes a two-pronged to attack on overpopulation.

One pronging is the encouragement of ethical suicide, which consist of going to the nearest suicide parlor and asking a hostess to kill us painlessly while we lay on Barcalounger. The other pronging was compulsory ethical birth control. Billy the Poet does not like to do it, because he think that, sex is the natural desire of human, and it cannot forbidden by government. One day Pete Crocker, the sheriff of Barnstable County, comes to the Ethical Suicide Parlor in Hyannis and announces to the two hostesses working there that Billy the Poet, a nothing head, was about to come to Cape Cod.

Billy the Poet is known to be eager to deflowering hostesses, who are all virgins, and to send them smutty poems before he violates them, and one of the hostesses is Nancy McLuhan who is works in Barcalounger. After that, Billy the Port comes to Nancy to do a dirty thing. Nancy is repulsed by the whole action and insults Billy the poet. In the end, Billy the poet leaves her alone handing her a bottle of ancient birth control pills which prevent pregnancy but allow sexual intercourse. The label on the bottle says: Welcome to the Monkey House.

So, the irony in this story is when government forbids their people to having sex, and gives them pills that made them like dying. Whereas, sex is the natural desire of human that cannot forbids by the government. It is according with Billy the Port statement to Nancy McLuhan that is one day he will make her understand that sexuality is a part of human nature and must not be suppressed by the Government. In the conclusion, I see that Kurt Vonnegut is the postmodernist writers that give the irony in his works that can be seen in the both of this story. 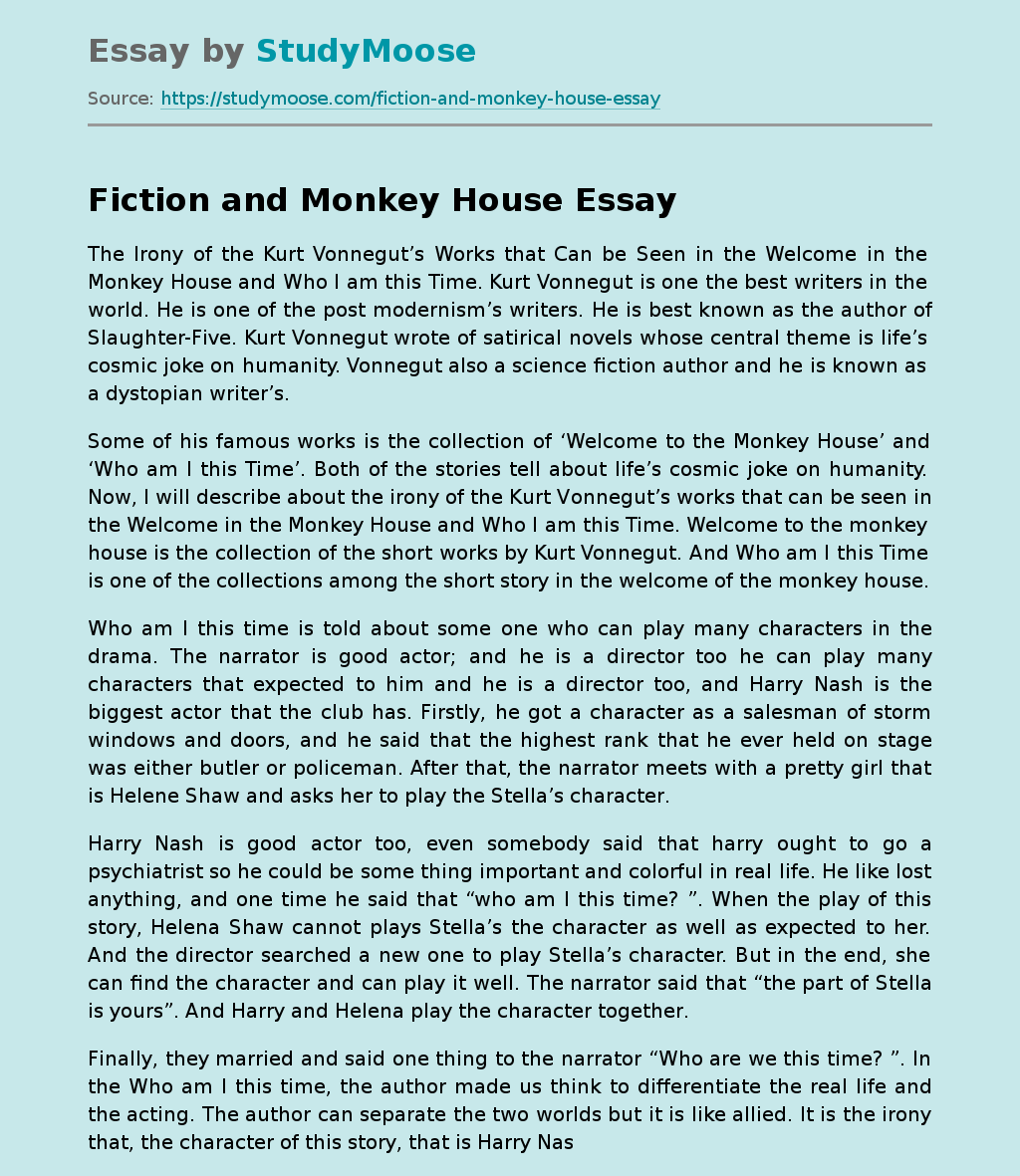