What is Fiat’s current situation in India?

Fiat is an Italian automobile manufacturer based in Turin. Fiat India in Indian car market is facing the dilemma of poor sales. It had a very small market share in India comparing to other existing automobile competitors. There was a good and long relationship with Tata Motors in Indian so Fiat and Tata were going to have a joint venture (JV) to manufacture passenger cars, engines and transmissions for the Indian and overseas markets.

Don't use plagiarized sources. Get your custom essay on
“ Fiat’s Current Situation In India ”
Get custom paper
NEW! smart matching with writer

These two companies began to seek for collaboration in early 2005. From the Exhibit 2: Production by Manufacturer, we can see Fiat in 2006 ranked 11 in worldwide auto industry while Tata stood in 21, which had merely Indian market. For Fiat this brand, it had a high brand awareness in India which is a good sign for them want to expand market there and Fiat also had the best diesel engine for small cars.

What is the business opportunity in India?

Do you think that Fiat needs a partner? In an attempt to lower costs, most major automotive makers had set up factories in emerging markets such as China, India and South America.

Because lower production costs were one incentive, experts also suggested that car makers could gain access to growing and fertile marketplaces that is the background for auto manufacture in India. The liberalization policies in 1991 opened up India to new import and export possibilities. To encourage investments, the government launched series of new policies in 1990s to help growing their economics.

For vehicle industry, there was total population of 1.1 billion people in India which is an obvious potential opportunity for auto makers.

I think Fiat really needs a partner. The trend at that time was all manufacturers with production greater than one million vehicles were involved in one or more alliances with other producers. Automobile manufacturers formed alliances for a variety of factors with the primary rationale being an attempt to reduce labor, energy, and raw material costs. So combining same value-chain activities to gain efficiencies, merge talents and share risks is a good choice. Observers lauded the tie-in stating that Fiat had the potential for more sales in the burgeoning Indian market while Tata stood to gain technology and new export markets.

Do you think Fiat and Tata make for good partners?

Compare the Fiat-GM relationship with the Fiat-Tata relationship. It looks like they make for good partners. They knew each other well before they wanted to committee themselves into joint venture. In 2006, they were both financially sound due to the good co-operation. At that time sourcing of parts usually involved 30 direct suppliers as well as 70 or more indirect suppliers (who served the direct suppliers). Automobile manufacturers usually established long-term relationships with their suppliers and involved suppliers in the development of new models. Fiat and Tata they examined synergies in overseas to give marketing support.

With help of Tata, they can improve Fiat’s dealership network and customer service, help to cut manufacturing costs and compete effectively against competitors. For Tata, this alliance with Fiat helped Tata get technologies and new design in future which is a win-win situation. Compared with the Fiat-GM relationship, Fiat and Tata might have better future. After Fiat and GM cooperation, their market share was decreased and had high debts issues. GM themselves were making losses and dissolve the agreement of Group’s auto business. There was no culture collaboration which made it crucial for long term relationship.

How would you assess the negotiation process between Fiat and Tata?

It was a long way communication before Fiat team came to Tata’s head office and came into negotiation but still better than longer waiting time for visa. I think they made a good conversation and made a lot of efforts like signing MoU to establish joint venture and equity structure. Made agreement to some manufacturing parts like passenger cars, power trains, engines and transmission for India and overseas. They focused on the spirit of relationship and show the prospects for long-term relationship. Most major components were negotiated. However, It was obvious that some culture difference appeared during their negotiation.

There are two layers of culture raised by a Fiat executive: first is Italian and Indian culture and the second is the difference in company culture. Even with another Italian company, Fiat can be very different. And some problem appeared like “It is always difficult going to the other company’s offices as they still have other work to attend to. So, we might have a meeting scheduled to start at 10am, which then starts at 11am and might end up being regularly interrupted by other issues.” But some complain cannot be very serious in their negotiation.

Fiat’s Current Situation In India. (2016, May 30). Retrieved from https://studymoose.com/fiats-current-situation-in-india-essay 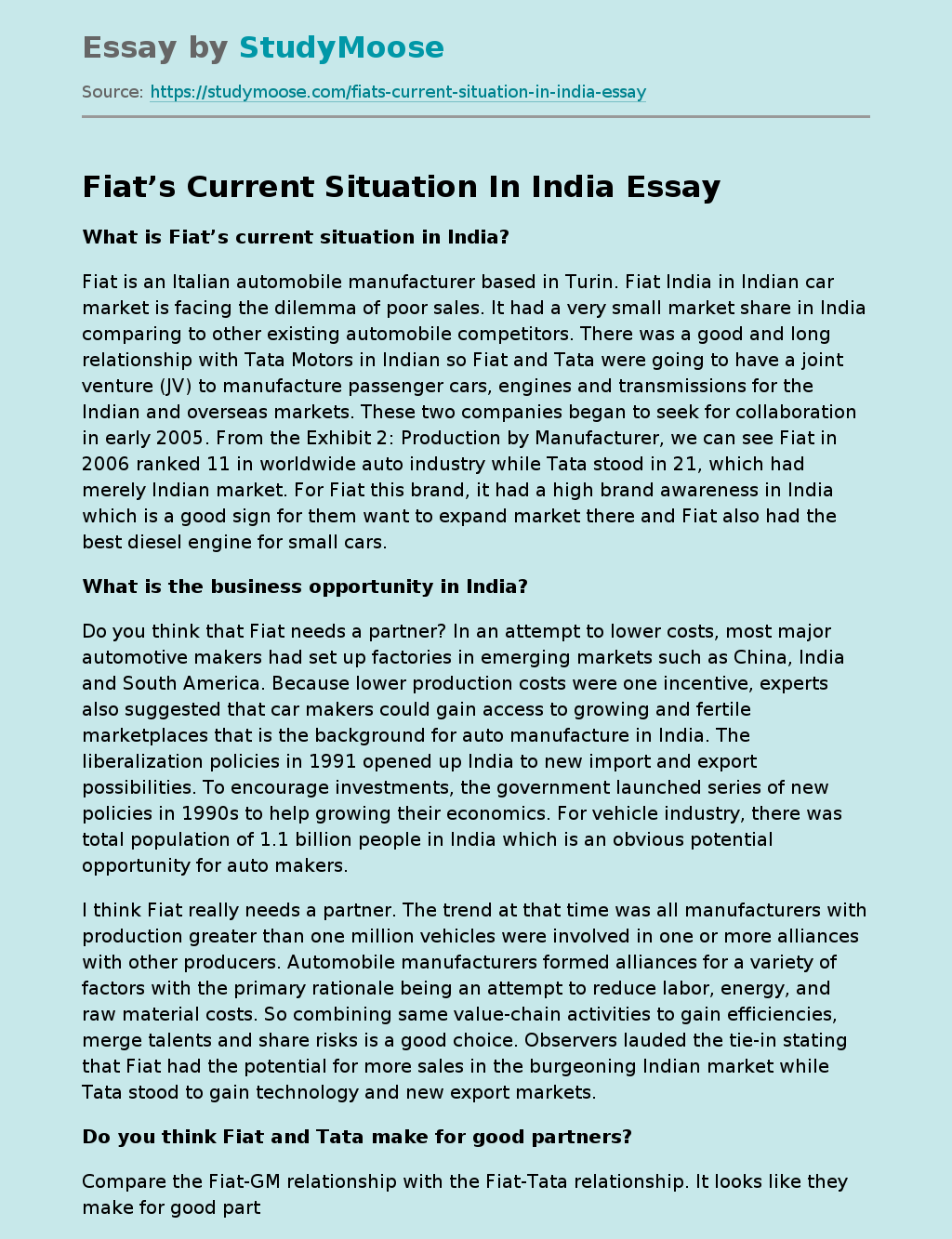