Turn in your highest-quality paper
Get a qualified writer to help you with
“ Fetal Pig Extra Credit ”
Get high-quality paper
NEW! AI matching with writer

Adrenal glands, pancreas, and gonads. 4. Given the assumption that human beings have more stress than adult pigs, which endocrine organs would expect to be relatively larger in humans? The adrenal glands. 5. Explain why the thymus gland in the fetal pig is so large, relatively speaking. It is so large because it is still a fetus and it will shrink as the big matures.

1. Is the fetal pig’s lymphatic drainage pattern basically similar or dissimilar to that of humans? Similar.

2. What is the role of the following? a. Thoracic duct: Receives lymph and drains lymph from everywhere except for what the right lymphatic duct covers. b. Right lymphatic duct: Drains lymph from the right upper extremity, head, and thorax delivered by the jugular, subclavian, and bronchomediastinal trunks. 3. What differences did you observe between the origin of the common carotid arteries in the pig and in the human? In the pig, the left common carotid artery originates from the brachiocephalic trunk while in humans the left common carotid artery originates from the aortic arch.

1. How do the structure and connectivity of the urinary bladder of the fetal pig differ from those of the urinary bladder of the human (or adult pig for that matter)? The fetal pig’s urinary bladder is collapsed elongated sac that lies between the umbilical arteries. This is due to the fetal use of the allantois. 2. What differences in fetal elimination of nitrogenous wastes account for the structural differences described above? The fetus gets rid of wastes via the allantois. 3. How does the site of urethral emptying in the female pig differ from the termination point in the human female? In the female fetal pig, urine is emptied into the urogenital sinus while in a human female urine is emptied through the external urethral orifice which is separate from the vagina.

1. The female pig has a Y-shaped (bipartite) uterus; that of the human female is pear-shaped (one-part). Explain the difference in structure of these two uterine types. 2. What reproductive advantage is conferred by the pig’s uterine type? The ability to produce litters. 3. Cite differences noted between the pig and human relative to the following structures: A. Uterine tubes or Oviducts: In the fetal pig, the uterine tubes are tiny and relatively much shorter than in a human. B. Urethral and vaginal openings in the female: In the female fetal pig, the urethra and vagina meet to create the urogenital sinus. The urethra and vagina in a female human never meet and are separate from one another. 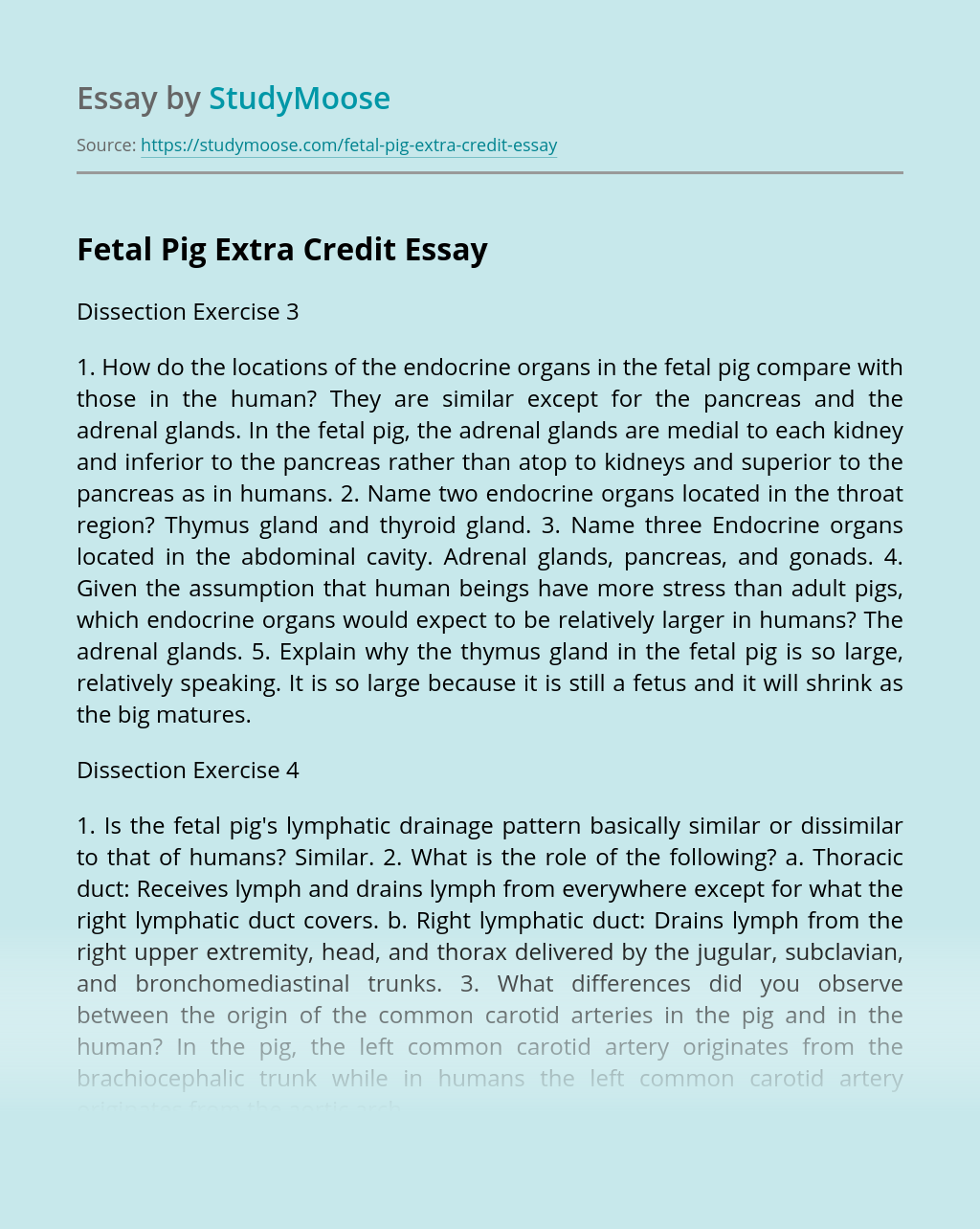 Turn in your highest-quality paper
Get a qualified writer to help you with
“ Fetal Pig Extra Credit ”
Get high-quality paper
Helping students since 2015
Stay Safe, Stay Original