Relationship between Ferdinand and Miranda

How does Shakespeare present the encounter between Ferdinand and Miranda from lines 450-499? The encounter between Miranda and Ferdinand in lines 450-499 of The Tempest is presented using three characters, Miranda, Ferdinand, and Prospero. Miranda and Ferdinand have fallen in love at first sight to Prospero’s delight, though he doesn’t want them to fall in love too quickly or interfere with his plans, so he lies to Miranda about Ferdinand’s unworthiness and then charms Ferdinand from moving. Miranda is presented as a helpless damsel distressed by the way her father handled this situation.

Don't use plagiarized sources. Get your custom essay on
“ Relationship between Ferdinand and Miranda ”
Get custom paper
NEW! smart matching with writer

“If the ill spirit have so fair a house, Good things will strive to dwell with’t” These are Miranda’s first words in these lines saying that physical beauty is a sign of proper morals and righteousness. This was an axiom during the renaissance period, hinting that she is only wise enough to state the obvious argument. After Ferdinand is charmed from moving she says, “He’s gentle and not fearful.

” This sounding like she believes he is courageous, but more likely she is emphasizing his gentleness and compassion. These short interjections present Miranda as useless to the entire dispute.

There are only three lines of verbal exchange between Miranda and Ferdinand, “My father is of a better nature, sir, Than he appears by speech. This is unwonted Which now came from him. ” This shows Miranda’s inexperience with men as she is almost too shy to say anything at all. Ferdinand is depicted as a good-looking man, with the normal qualities that come along with royalty such as courage, and a heroic nature.

“I will resist such entertainment (treatment) Till mine enemy has more power. ” This expresses Ferdinand’s royal nature, as he is accustomed to overpowering all enemies.

After prospero commands his attention, accuses him of falsely bearing the title of the prince of Naples, and asks for him to obey his every word, Ferdinand says, “No, as I am a man. ” This explains Ferdinand is used to getting what he wants and being adored by all and has previously given out orders rather than taken them. Finally, Ferdinand gives up arguing prospero, “Might I but through my prison one a day Behold this maid” He pledges his heart to Miranda saying that he doesn’t care if he gets punished as long as he can see this girl. But both of these characters are dwarfed by Prospero’s powers and wisdom.

Prospero is the centre of all talk in these lines, as both of the younger characters are pleading to Prospero to let them live out their love for one another, though neither can match the sorcerer’s power, “Come from they ward, For I can here disarm thee with this stick And make thy weapon drop. ” Here is the suggestion that prospero is the mightiest of all men, as his stick can defeat any armed man. His wisdom is also expressed through the use of proverbs, “What, I say, my foot my tutor? ” This asserts Prospero’s paternal control over Miranda as well as proving that prospero is a man of great intellect.

All of Prospero’s ‘aside’ passages allow the audience to see through his eyes, “(aside) They are both in either’s powers, but this swift Business I must uneasy make. ” Here we are told that prospero, despite the fact that he is pleased with his daughter’s love, is planning to put Ferdinand through menial tests, possibly to keep him from disturbing his plans. Seeing this passage through Prospero’s eyes gives the audience a sense that he overwhelms the others in power and wisdom. Shakespeare has made Prospero the key to the presentation of this encounter.

Relationship between Ferdinand and Miranda. (2017, Nov 16). Retrieved from https://studymoose.com/ferdinand-and-miranda-essay 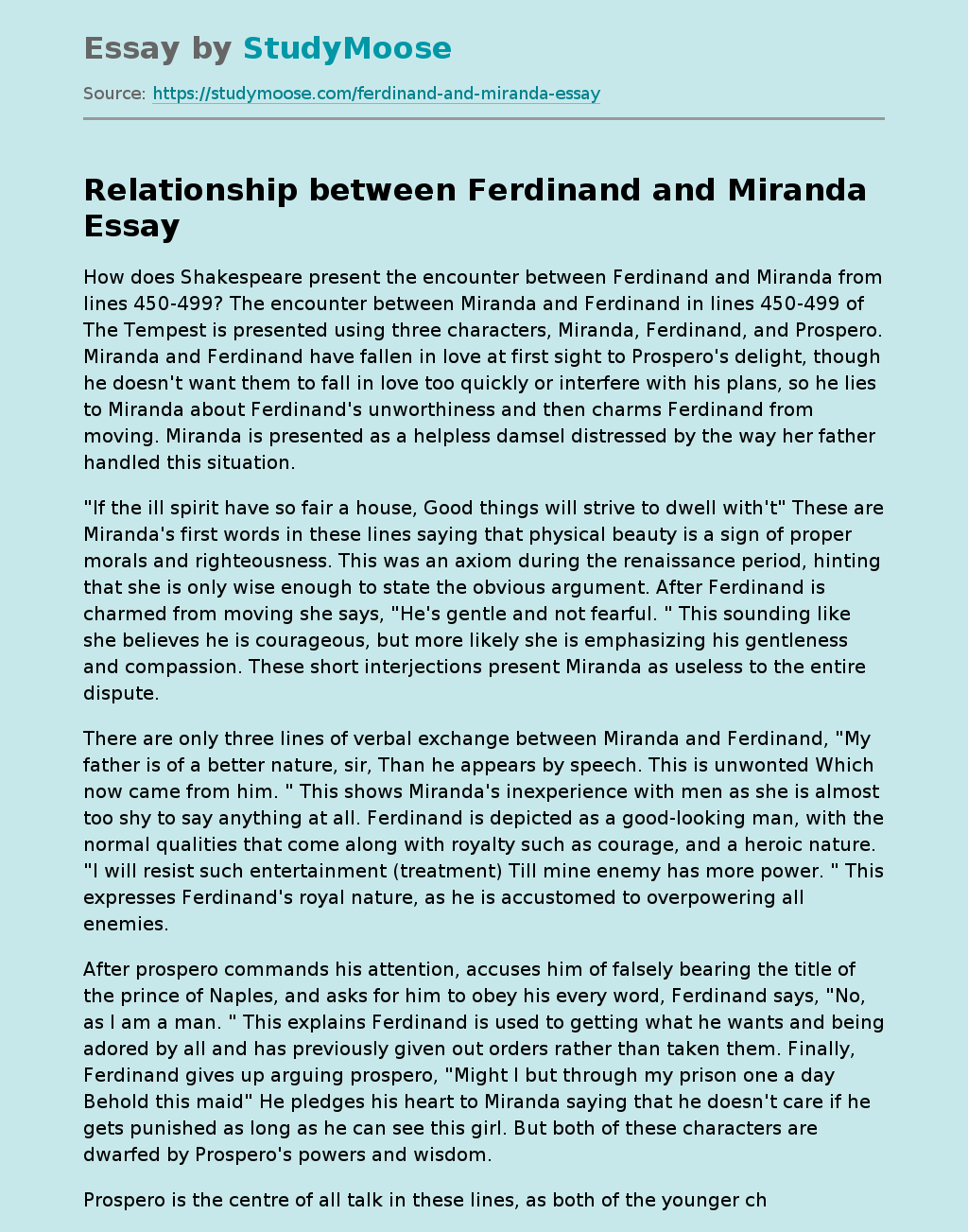