The dramatic structure in the form of racism

The play ‘Fences’ is a thoroughgoing hit that is generally considered as his biggest success commercially. The dramatic structures of the play are evident. First, there is the use Fences: the play was not named Fences simply because of the major backdrop of building a fence in the backyard of the Maxson’s but rather; the author utilizes fences figuratively and as a literacy tool. Moreover, the relationships in the play are built and broken in the same backyard during the building process of the fence.

Don't use plagiarized sources. Get your custom essay on
“ The dramatic structure in the form of racism ”
Get custom paper
NEW! smart matching with writer

The call to build the fence is considered as a foundation to Rose’s character whose request to build the fence posters here to the audience as loving and caring. Bono explains Rose’s character as, “Some people build fences to keep people out and other people build fences to keep people in. Rose wants to hold on to you all. She loves you.” On the other hand, Troy and Cory consider the building project as a thing for and reluctantly take part in the project.

Bono further figuratively uses fences as a tool to indicate Troy’s mannerisms of cheating on his wife just are pushing Rose away just like fences serve the purpose of keeping people off. The reluctance on Troy’s part to partake in the building process of the fence illustrates a man who is unwilling to hold his family together. The end of the play shows a complete fence which similarly demonstrates the unity of a family that was previously broken.

Secondly, the devil is cast by Troy in his stories and presents the devil as a character whose purpose is to frustrate his family and further the devil illustrates the struggles Troy experiences in life. For instance in scene 1:1, the author presents Troy’s tale of a long struggle with the Devil thus admonishing his thoughts as being rooted in the most absurd of ideas. Retrospectively, he tells another story where he turns a white man into the Devil. In lieu of the same use of the Devil in the play, Troy thinks of the devil not as imaginary being but gives it life by equating it to a human being in his stories. Towards the end of the play, we see Troy’s thoughts on the Devil being replicated in his bad luck in life and what curtails and degrades his dreams throughout the play he considers racism as his Devil.

There is also the dramatic structure in the form of racism. In Act One, we are presented with Troy’s and Bono’s lives whose childhoods have are rounded in the tales of difficult fathers in the upbringing in Lyons. The painful memories of their live reflect on the relationship that Troy and Cory have in the play. In consideration to how Troy was treated in his childhood years, he felt and saw it fit to bestow responsibilities onto Cory at an early age, his perception of the black child was that they should strive by all means to ensure they come at the of the food chain irrespective of the conditions was being presented with. Considering the fact that Troy was discriminated upon during his baseball years, he is afraid that his son will go through the same and he cannot allow what happened to him be experienced by his son. This shows that during Troy’s time, it was difficult for a black to succeed in sport and educational activities irrespective of how successful they were in doing undertaking an idea to anything worthwhile. It is because of these insecurities that he moves to Cory’s football coach to prevent him from playing football so as not to secure him a sport scholarship for college.

The dramatic structure in the form of racism. (2016, Jan 03). Retrieved from http://studymoose.com/fences-essay 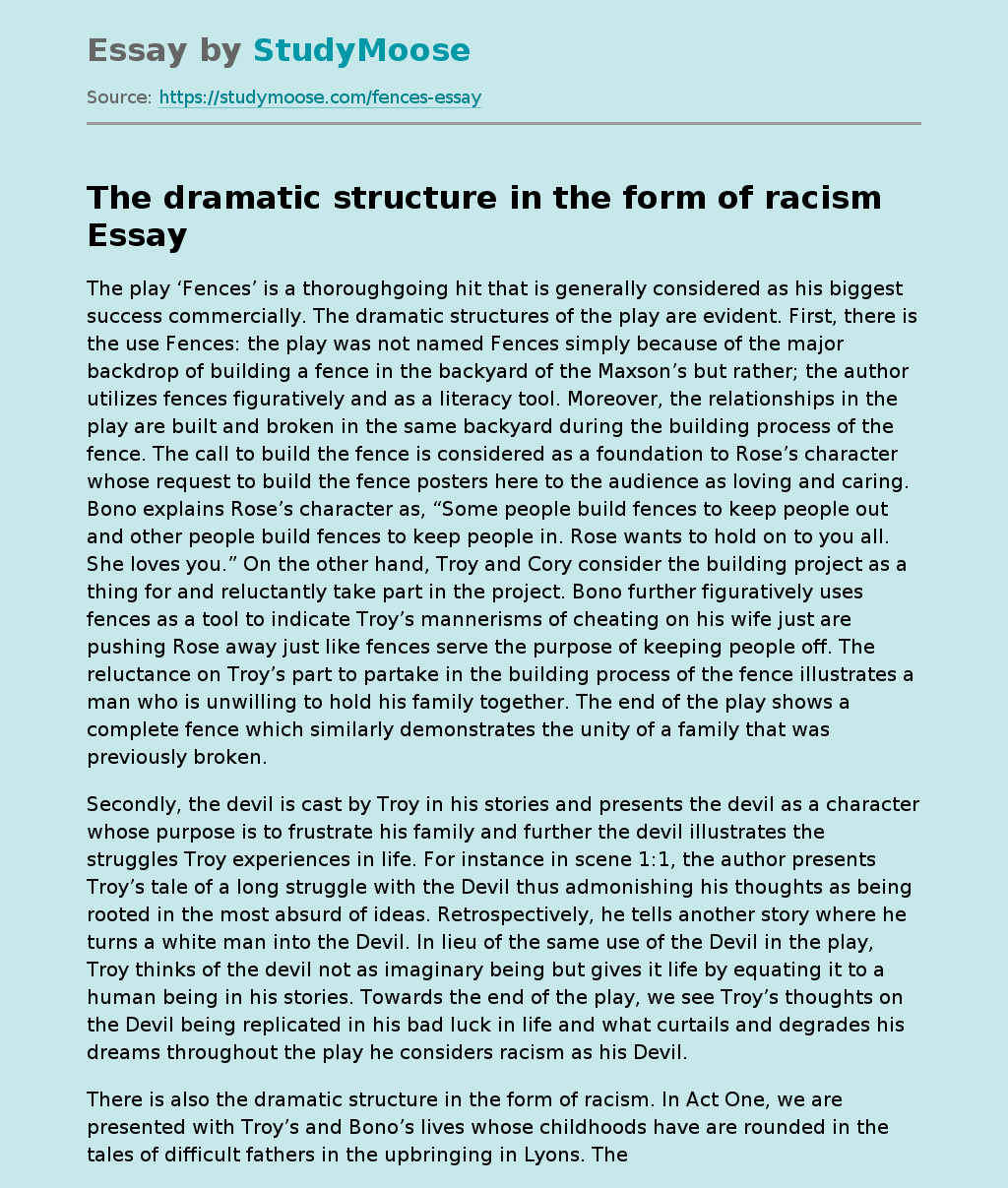