Feminist Perspective in the Merchant of Venice

The feminist critical perspective examines the roles that women play in literary works and their true significance to the text. Their roles are usually decided on by the society or time period in which the story is set. In “The Merchant of Venice,” females were suppressed by the societal ideals of Shakespeare’s Elizabethan era, which is portrayed through the characters of Portia and Jessica, who could not establish their own powerful identities because they were women. Portia and Jessica are the main female characters in the play.

Don't use plagiarized sources. Get your custom essay on
“ Feminist Perspective in the Merchant of Venice ”
Get custom paper
NEW! smart matching with writer

If they had been given a chance to show their skills, they undoubtedly would’ve been extremely strong women. However, they had to mask their abilities in order to appeal to their male counterparts. Their positions in the story were to show what it was to be the ideal Elizabethan woman. Time and time again, Portia and Jessica were shown to be mere objects that were owned by the male characters in the story.

They could not shine or become powerful characters, when they had every capability to.

According to Maggi Ros’ “Life in Elizabethan England: A Compendium of Common Knowledge,” a woman was nothing more than property in Elizabethan society. It states that, “Children are the property of their parents, and give them the respect a servant gives his master…Wives are the property of their husbands…Some women are more independent than others. However, every woman expects to be married, and to depend on her male relatives throughout her life.” Throughout the story, we see that Jessica and Portia fit perfectly into this description of Elizabethan women.

Jessica was the property of her father. Shylock did not care for his daughter nearly enough as the fact that he owned her. When Jessica eloped with her lover, Lorenzo, Shylock cared only about two things: that his daughter had eloped with a Christian and that she had stolen his money. The reader can see this when Salanio, while gossiping with Salerio, mocks Shylock: “I never heard a passion so confused / So strange, outrageous, and so variable / As the dog Jew did utter in the streets: / ‘My daughter! O my ducats! O my daughter! / Fled with a Christian! O my Christian ducats! / Justice! the law! … A sealed bag, two sealed bags of ducats, … Stol’n by my daughter! Justice! Find the girl!'” (II.viii.13).

Jessica’s eloping with Lorenzo signified that Shylock’s source of pride, his Jewish religion, would end after his death. There would be no continuance of the tradition because Jessica had betrayed him and married a Christian. She could no longer bear him a Jewish heir. After his religion, money was the second most important thing in Shylock’s life. Jessica had taken some of his ducats and precious stones. He begged the law to condemn Jessica, who had stolen his hard-earned money. It was obvious that the loss of his daughter did not affect him one bit. But rather, it was the loss of his money and Jewish bloodline which infuriated him. Sadly, this showed that Jessica’s worth was limited to nothing more than mere property.

Portia was, like Jessica, bound by her father. She says: “If I live to be as old as Sibylla, I will die as chaste as Diana, unless I be obtained by the manner of my father’s will” (I.ii.98). Her deceased father had left behind a will, which contained a riddle. There were three caskets, made of gold, silver, and lead. The man who can correctly choose the casket containing Portia’s picture would become her husband. If Portia had not remained loyal to her father, she could have easily chosen any man to be her husband. However, this shows the power of the male guardian in Elizabethan times. Portia did not dare to be disobedient to her father, even after his death. “O me, the word ‘choose’! I may neither choose who I would, nor refuse who I dislike, so is the will of a living daughter curbed by the will of a dead father (I.ii.19). Instead, she grudgingly accepted the riddle as the ultimate decider in her fate and love life.

In another aspect of Elizabethan society, women were mere objects that belonged to their husbands after ownership was transferred from their fathers. The suitors lasciviously desired Portia for her beauty and wealth. If they could win her as a wife, their reputations and futures would be set. The first suitor to try his luck at the riddle of the caskets was the Prince of Morocco. He chose the gold casket which had an inscription that read: “Who chooseth me shall gain what many men desire” (II.vii.5).

This shows that Morocco was a greedy man who desired Portia for materialistic reasons, just like many other men who would desire the gold too. The second suitor to attempt the riddle was the Prince of Arragon, who chose the silver casket. Like Morrocco, Arragon was quite superficial. “I will assume desert. Give me a key for this / And instantly unlock my fortunes here” (II.ix.52). He saw Portia as merely a free ride to financial security. He didn’t want her because he loved or cared for her. He only wanted her for her money and power. Women were a prize which men displayed and flaunted. A woman had no true value as a person.

A recurring event in the play was the women disguising themselves as men. This is symbolic of the suppression of the women by their male counterparts. They had to mask their true abilities under the guise of men. There was no way in Elizabethan society for a woman to be successful in any field other than wifehood or motherhood. In Act II, Jessica was finally rebelling against the strict rules of Shylock. She was taking extreme measures in order to elope with Lorenzo. “I am glad ’tis night, you do not look on me / For I am much ashamed of my exchange / But love is blind and lovers cannot see / The pretty follies that themselves commit / For if they could, Cupid himself would blush / To see me thus transformed to a boy” (II.vi.34). Escaping from her father should have empowered her character, but in fact, it didn’t. She had to disguise herself as a pageboy, thus, taking away any feeling of female empowerment that the act of eloping should have brought. She was defying in the costume of a male and this showed that only males had the power to rebel or to be strong.

At the end of Act III, Portia and Nerissa dressed up as a male lawyer and clerk and traveled to Venice to defend Antonio. Portia was the most intellectual character in the play and that was made evident by the skill with which she executed Antonio’s defense. When the evidence was clearly stacked against Antonio, using her wit and intelligence, Portia turned the tables on Shylock and made him the victim. Portia’s cleverness was shown when she said: “This bond doth give thee here no jot of blood / The words expressly are ‘a pound of flesh:’ / Take then thy bond, take thou thy pound of flesh / But, in the cutting it, if thou dost shed / One drop of Christian blood, thy lands and goods / Are, by the laws of Venice, confiscate Unto the state of Venice” (IV.i.309).

Portia knew that Shylock had every right to cut Antonio’s flesh–the law gave him that right. But, she also knew that the law stated that if an attempt was made at a Venetian’s life, the perpetrator would have his property confiscated. This was a brilliant twist of events that greatly affected the case. Shylock had now turned into the victim and Antonio was completely off the hook. Portia was an utterly brilliant lawyer, which everyone in the courtroom could distinguish. However, Antonio’s defense and the infamous “quality of mercy speech” were made under the disguise of a male lawyer. No one would ever see the true intelligence that Portia actually beheld, simply because an intelligent female was unfathomable in Shakespeare’s time.

Women in Shakespeare’s Elizabethan society were greatly undermined. This is made quite evident in The Merchant of Venice, through the feminist critical perspective. Societal ideals forced Jessica and Portia to mask their abilities and talents. They could not show their true identities or else they would break the mold of a proper Elizabethan woman, which was absolutely unthinkable. Portia and Jessica were both the property by their fathers and could never really break free from that ownership.

Also, Portia was desired by men for her wealth and beauty, rather than her intelligence and personality. Women were merely a prize that should be flaunted. Their inner-value was worthless; it was their material value that mattered. Finally, both women had to disguise themselves as men in order to express the independence and power they possessed. The female characters in the story were inferior to the males because of the social stigmas which had existed during Shakespeare’s time period.

Feminist Perspective in the Merchant of Venice. (2016, Jul 22). Retrieved from http://studymoose.com/feminist-perspective-in-the-merchant-of-venice-essay 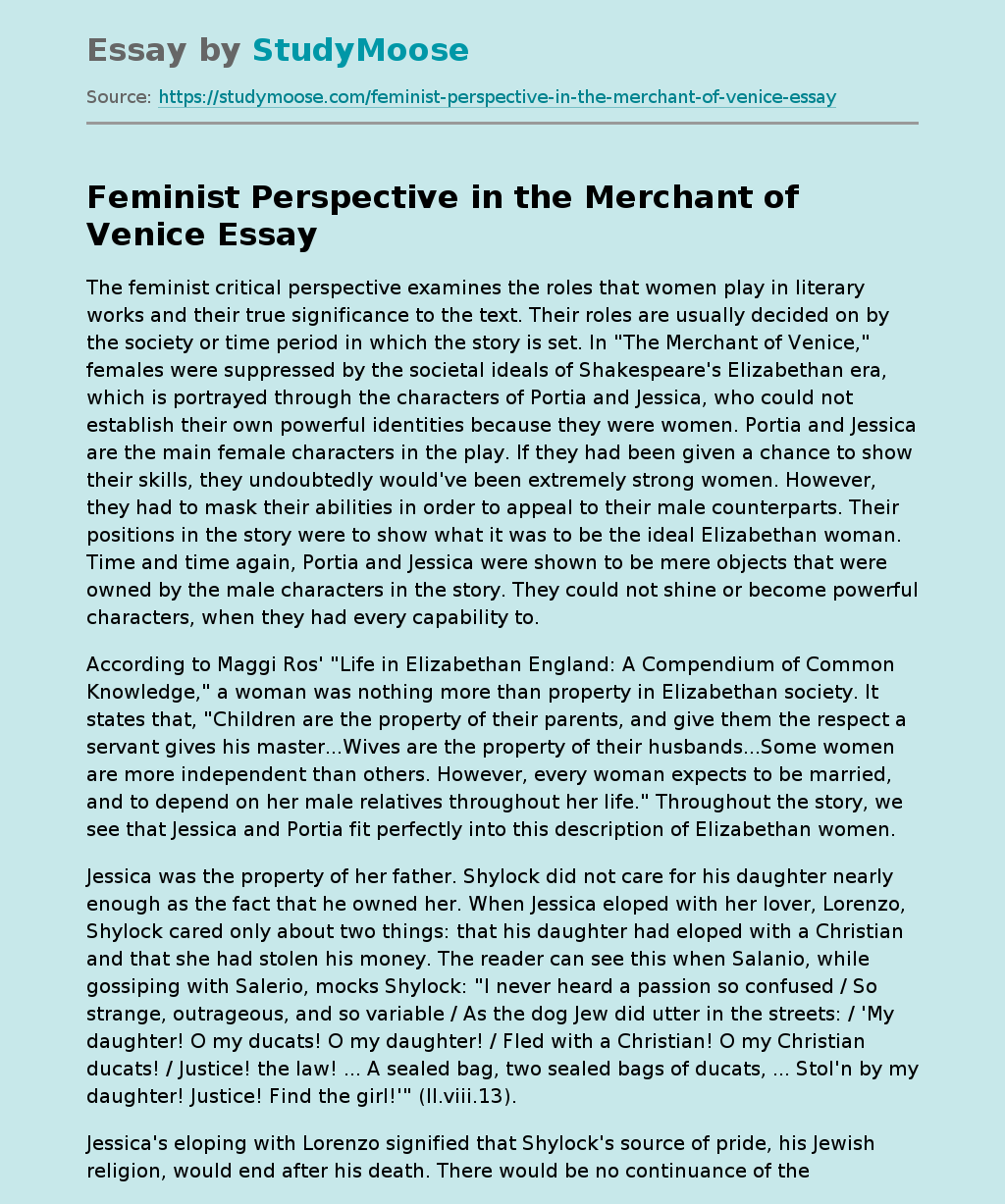