As the rise of feminism advanced and reaped enormous benefits such as advancements in women rights, equality amongst men and equality within the work force, however, had failed to advance outdated ideologies that decayed societal progress creating gender and identity oppression. As feminism had risen, leaving behind the bigger problem, the epidemic of institutional and identity oppression were omnipresent in that contemporary world is a testament to this claim.

Don't use plagiarized sources. Get your custom essay on
“ Feminism and Institutional Oppression ”
Get custom paper
NEW! smart matching with writer

This paper will outline the key components of Institutional oppression with reference to Bell Hooks and Barb Thomas, namely racism, sexism and identity oppression that I came across within the readings.

As Bell hooks introduces, feminism being a movement to end sexism, sexist exploitation and oppression. She gives us an insight on the rise of feminism and how feminism advanced overtime and the problems faced. Followed by, ignoring yet constantly touching up upon the bigger problem of Institutional oppression, in specific racism, gender injustice and sexism amongst women themselves.

Which continues to contradict the notion of feminism itself that has been introduced by Bell hooks.

In reference to the quotation provided to us by Bell hooks. “…They simply emphasized that we could only become sisters in struggle by confronting the ways women – through sex, class, and race – dominated and exploited other women,” (Hooks 3). Women’s exploiting other women is a big problem to begin with. Especially, when it demonstrates a concept of “Feminism”.

It was an easier ideology to accept to and since patriarchal mass media didn’t hold much interest towards the revolutionary feminist vision, and easier presented towards the mainstream press. The importance in achieving race and gender equality was ignored and rather presented, as “women wanting equal rights as men” is said was the main concern of feminist movement, just because it was a notion easier understood and achieved. Furthermore, “…white men were more willing to consider women’s rights when the granting of those rights could serve the interest of maintaining white supremacy,”(Hooks 4).

Accepting to a feminist movement solely because it provides a specific race with advantage. Essentially, indicates a high level of race inequality. We are reminded of the fact that as Feminism advanced more or less creating awareness of the fact that woman through sex, class and race dominated and exploited other women. The question is why does this happen, because they aren’t the same skin color, and further accepting to it, can one consider themself as feminists? White women were given supremacy and recognition over black women. Even though there was equivalence amongst the work being put towards the movement.

Black women were as active within the rise of feminist movement, yet were never considered to be the “stars” of the movement; it was always the white women. “Visionary feminist” thinking was constantly being overshadowed, ignored and some what recognized amongst the academic circle or towards the highly literate. Yet did not receive any sort of attention through the mainstream. “…Reformist feminist became their route to class mobility…while sexism did not end, and they could count on there being a lower class of exploited subordinated women to do the dirty work,”(Hooks 5).

Having said, as sexism had continued and feminism advanced, lower class women were still suffering with not only in achieving rights amongst men but as well as amongst women themselves. One cannot call themselves feminists while willingly oppressing other women. This clearly contradicts the notion on feminism provided to us by bell hooks as this indicates severe identity/sexist oppression. Bell hooks further states, “…The assumption continued that no matter what a women’s politics, be she conservative or liberal, she too could fit feminism in to her existing lifestyle”, (Hooks 6).

Whether you are a conservative feminist or a liberal feminist, I believe, it is necessary to maintain equality amongst women themselves. Just because the notion of “Lifestyle Feminism” was more recognized and acceptable does not prove to be correct in accordance to her idea on feminism itself. Having to ignore the real problem and advancing towards the other because it was easily grasped and recognized didn’t provide sufficient solution to the growing problem of identity oppression lower class women were facing.

Secondly, bringing forward the second quotation, as Barb Thomas speaks with grace, just and depth. She recognizes the bigger problem, namely racism, sexism imperialism and poverty. Also brings forward of the fact that these problems are caused by others, leading to wounds and scars. Once you’re scarred, not only does the damage continue but rather results to destruction. What only destructs is when the scar caused by another wasn’t accidental. Barb Thomas introduces to us a great notion behind feminism.

Which not only brings forward of whether one can be a feminist without fundamentally challenging and changing institutional oppression or not, essentially, speaks and brings forward the importance of fundamentally challenging and changing institutional oppression on a day-to-day basis. Within her text mentions the disgust she feels through “racism” as it leads to bad relationships, increased domination, brings forward lies, creates oppressed relationships, limits your perspective and diminishes friendships and community. …When people are not the target of racism, and get that uncomfortable and angry, can bet there is substantial to look at and change, and when people cant see what’s right around them, there is some effort being exerted not to see,”(Thomas 194).

I do believe feminism itself is a concept tailored to each person individually, however, how you pursue that concept makes a big difference. There is a difference between wanting to be a feminist and acting upon being a feminist. Whether you choose to accept and do some thing about human oppression or ignore it. …That women struggles are shaped by race and class,”(Thomas 201) It is a journey of realization of wanting to bring change not only for women themselves and entire human kind but it is adapting to a certain way of life and eradicating any sort of Institutional oppression. It is through diminishing any sort of human oppression we will be able to adapt to the concept of feminism. “…It seemed that neither myself nor my neighbors were feminists,” (Thomas 201) States, through her journey of discovery.

While discovering the harmful effects of institutional oppression she also acted upon taking every step to eradicate human oppression. “…I fight racism because I can’t be with myself without doing so”(Thomas 206). Followed by incorporating a concept that explains the oppressive institutions that intertwines namely sexism, classism and racism within her journey of experiencing and recognizing “Intersectionality”. In conclusion, Institutional oppression and social inequalities like racial discrimination and gender segregation were dominant features of the pre globalization era.

Though feminist theories have been implemented to significantly reduce the impact of such inequalities. However, even though “feminism” as a term tailors to each person individually, I continue to believe, one cannot be a feminist without fundamentally challenging and changing institutional oppression. Barb Thomas Quotes to her daughters, “…Make the most of who you are without damaging other people with less social power than yourself”(Thomas 210). Progress and prosperity rests on our ability to identify individuals as humans rather than by their skin color or gender. 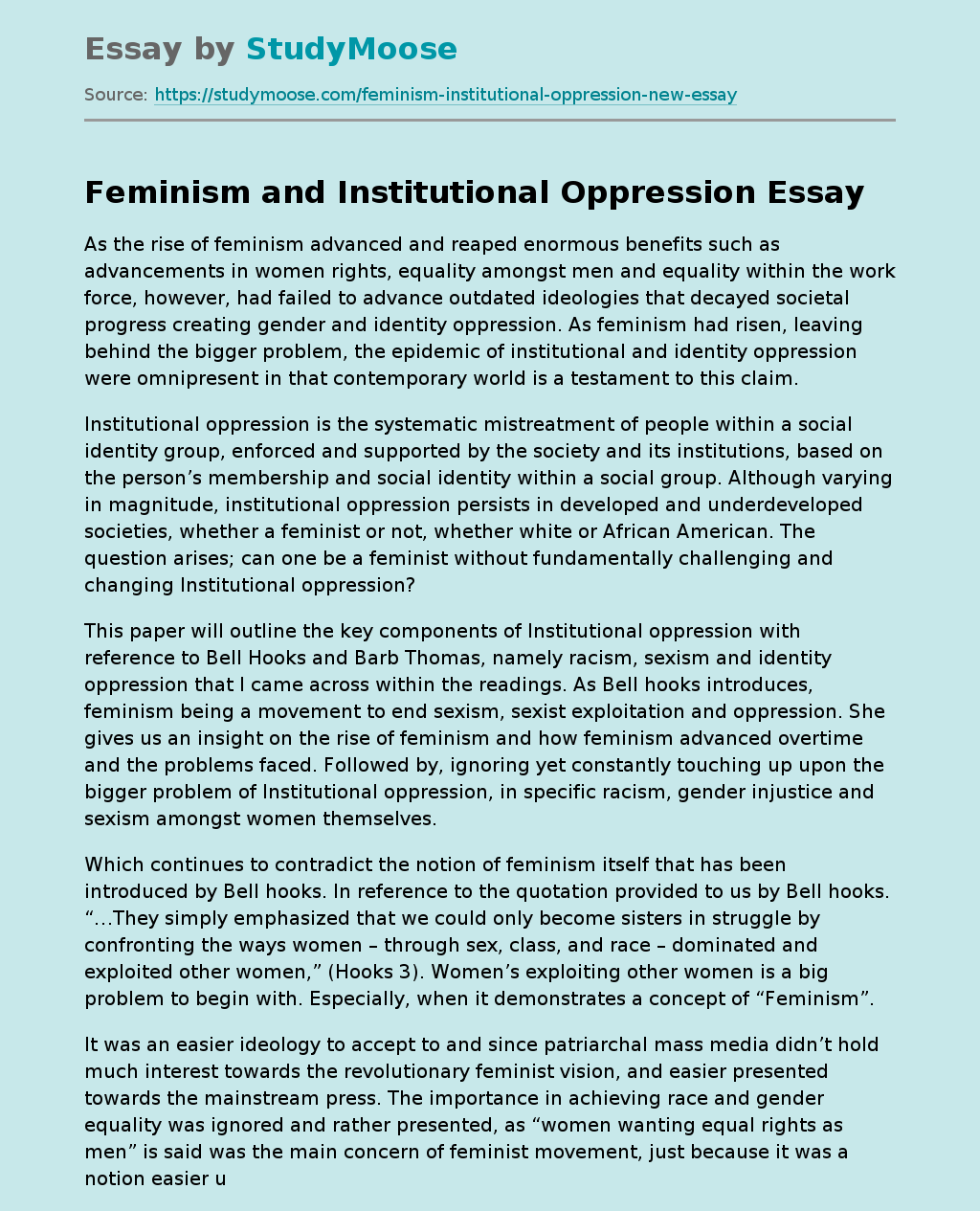