Feminism in Their Eyes Were Watching God

Feminism is the fight for equality. But there are still some women who think that it serves for impairment of men’s rights. What is feminism? Feminism is the belief that both sexes should have equal rights and opportunities. We meet Janie, a mixed-race girl looking for true love in post-slavery Florida. Jane marries Logan, as planned by her grandmother. She leaves when he threatens to kill her. After leaving Logan, Janie marries Joe, the mayor of Eatonville, Florida. Joe is much older than Janie and accuses her of acting too young.

Don't use plagiarized sources. Get your custom essay on
“ Feminism in Their Eyes Were Watching God ”
Get custom paper
NEW! smart matching with writer

Janie lashed out and insults his pride. Joe becomes sick and dies. Janie’s a happy widow but meets a vagrant named Tea Cake. They fall in love and move to the Everglades to work. Tea Cake and Janie choose to stick out a hurricane and are attacked by a rabid dog. Janie’s unharmed but Tea Cake has rabies. Because of Tea Cake’s rabies and paranoia, he attacks Janie.

She is found not guilty and she returns to Eatonville to tell her tale. Throughout the book ‘Their eyes were watching God’, there are many examples of feminism; men consider women as mere household caretaker, men tell women to conceal their beauty, and men expect women to stay inferior with them and listen to their every need. First, feminism is used in their eyes were watching god because of Janie’s relationships with her husbands. For example, men consider women as mere household caretaker. For example, “Looka heah, Lil Bit, help me out some.

Cut up dese seed taters fuh me. Ah got tuh go step off a piece.” (Hurston, 29) This is significant because Janie’s had to step out of her inside duties to do her husbands outside jobs because he told her to. Another example, “You behind a plow! You ain’t got no mo’ business wild uh plow than uh hog is got wid uh holiday! You ain’t got no business cuttin’ up no seed p’taters neither.” (Hurston, 29)

This is significant because Janie starts to think that she is not the woman to be working on her husbands outside jobs and listens to Jody’s advice. He makes her realize her woman hood. Lastly, “thank yuh fuh yo’ compliments, but, my wife dont know nothin ‘bout no speech-makin’. An I never married her for nothin’ lak dat. She’s uh woman and her place is in de home.” (Hurston, 43) This is significant because, through the feminist lens, men think of women’s places being in the house and not to be speaking and joining in. Secondly, in their eyes were watching god, Janie’s relationship with Joe wasn’t great either. Joe didn’t like how Janie would show her beauty. For example, men tell women to conceal their beauty. For example, “Whut make her keep her head tied up lak some ole ‘oman round de store? Nobody couldn’t git me tuh tie no rag on mah head if Ah had hair lak dat.” (Hurston, 49)

This is significant because Jody made her cover her hair so no other man can touch it or favor it. Lastly, as shown in Their Eyes Were Watching God it shows that Janie’s relationships expect women to stay inferior to them and for women to listen to there every satisfaction. For example, “Yuh reckon so? Jody useter tell me ah never would learn. It wuz too heavy fuh mah brians”. (Hurston, 96) This is significant because Tea Cake teaches Janie how to play chess. Janie was happy because Jody had said she was too stupid to learn how to play. Another example is “ Ah always did want tuh git round uh whole heap, but Jody wouldn’t ‘low me tuh. When ah wasn’t in de store he wanted me tuh jes sit wid folded hands and sit dere.” (Hurston, 112)

Feminism in Their Eyes Were Watching God. (2021, Dec 03). Retrieved from https://studymoose.com/feminism-in-their-eyes-were-watching-god-essay 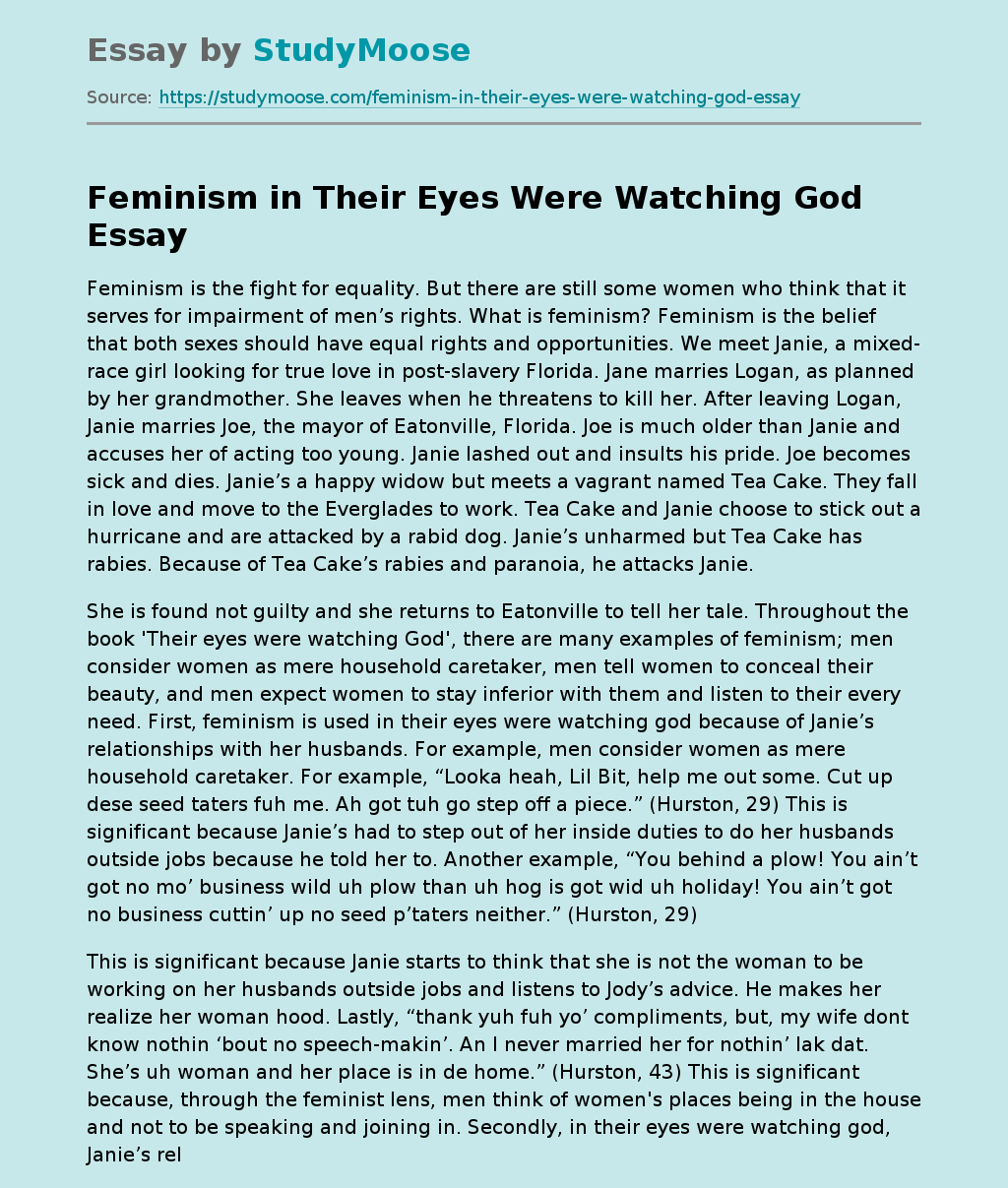