Feminism in the Handmaid's Tale

Some would argue that Margaret Atwood’s The Handmaid’s Tale is a book that pulls its ideas and beliefs about women and their place in society from the Bible. But based upon the novel, the Bible, and some writings by Christian writers, that is true, but highly skewed. Let’s begin by taking a look at how society is setup in The Handmaid’s Tale so we can have a clear understanding where the author is coming from. The whole premise is that women have lost all power, freedom, choice, and equality and are instead deemed either suitable for slave/maid type work or bearing children.

Don't use plagiarized sources. Get your custom essay on
“ Feminism in the Handmaid’s Tale ”
Get custom paper
NEW! smart matching with writer

Girls are taken to Rachel and Leah Re-education center, or the red center, as the girls living there knew it, and “indoctrinated” or brainwashed into the ideologies of the government and taught that their only role is to conceive children. They are also told that the structure of this society (Gilead) is better for women, more respectful and safe.

Offred, the main character in the novel has a very monotonous and strict routine everyday that consists of shopping for the commander, the man of the house, and visiting the doctor frequently to be checked, and then undergo the ceremony.

This ceremony is the emotionless, speechless sex that she has with commander in order to bear children because of the sudden drop in reproduction in the past society. Now that we have the groundwork laid, lets look at a couple ways they skew the role of women from what it is meant to be according to the Bible.

The ceremony that they participate in includes reading from the Bible before engaging in sex. The only problem with that whole idea, is that they only read a small passage of one book every time, that speaks about a barren women urging her husband to lie with her servant so they may have a child.

The problem with this is that it’s taken completely out of context. The backstory to Rachel, the barren woman, is that Jacob was supposed to be married to her after working for her father for seven years, but instead Laban, the father, gives his older daughter Leah to lie with Jacob. When he discovers he was tricked he tells Laban he will work another seven years if he can have Rachel as his wife. Because God saw that Rachel was much more loved than Leah, he made Rachel barren and blessed Leah with four children.

This is why Rachel asked Jacob to lie with a servant girl; she was envious of her sister Leah (The Holy Bible ESV, Gen. 29-30). The way it is portrayed in the novel is just as a source of reason. The commander and the government need a way to convince women of society that what they are doing is good and it is what they are designed to do. The Bible also speaks in Genesis how man and woman were created in God’s image and how both are equally valuable. Women in Atwood’s The Handmaid’s Tale are not at all treated equal.

Wayne Grudem says it well in his book Bible Doctrine, …and Paul emphasizes, “In the Lord, woman is not independent of man nor man of woman; for woman was made from man, so now man is born of woman” Both men and women are equally important; both depend on each; both are worthy of honor” (201). This quote really shows how incorrect the society of Gilead has interpreted the Bible and also how poorly they have viewed women. They claim the safest way to protect the women is to restrict all their rights and give them the opportunity of one of three positions in society, which of those three, they do not even get to select.

There are few instances in the novel that represent love, affection, or care; and this would be in the previous world and then between Offred and Nick and even that is a lot of physical affection more than true love. The Bible clearly states in Ephesians 5, “Husbands, love your wives, as Christ loved the church and gave himself up for her… In the same way husbands should love their wives as their own bodies. He who loves his wife loves himself. For no one ever hated his own flesh, but nourishes and cherishes it, just as Christ does the church” (Eph. 5). This whole idea is nowhere near represented in The Handmaid’s Tale.

The commander is married to the wife almost as a status. He has total authority over her and because she is barren they do not even sleep together. To bare child, he lies with the Handmaid, and to have pleasure, he visits Jezebels, which is a strip club. Which brings up another point in which prostitution and pornography were two of the major staples in the State’s philosophy of keeping women protected, yet they still have clubs that the men visit to enjoy themselves. Some may argue that there is biblical text to support everything that was done, such as Titus 2:5, which states “…women are to be submissive to their own husbands” (Titus. 2. ).

This verse is said amongst many other actions women should portray towards their husbands, but it is originally meant, all out of love for their husband and ultimately for their love of Christ. Gilead believes having authority over everyone’s lives and particularly complete control of women. This just one more example of the misconstrued biblical reference portrayed how they see fit. This whole concept of people pulling verses out of context and twisting them to what they want is why so many people have a hard time believing in the truth. It has been so misinterpreted to what people want to believe or how people want others to believe.

Gilead’s focus is on reproduction, order, control, and power. They have just found a way to use religion as a tool for their own plans, and in doing so have butchered the entire meaning of the device they are using. One more example of this is through other biblical references in the language. The entire book uses a variety of religious or Biblical language which includes but is not limited to: soldiers being called angels, the domestic servants are called Marthas, the store Milk and Honey, and even vehicles carry religious terms such as behemoth or chariot.

These terms are used to help solidify the State’s justification for their actions. Using Biblical terms allows them to continue to preach that everything they do is to protect and serve according to the Bible. Again the problem is that they pull what they want from context and don’t use it according to how the original author intended it for the original audience, or how God meant for us to live. Margaret Atwood wrote a great novel describing what life could be like; if suddenly all women were subject to men’s rule and forced to live under such rigid conditions due to society’s prior downturn.

Although the basis of Gilead, and it’s ideas and beliefs were high misinterpreted passages and references of biblical text. As previously stated, if someone is going to use biblical and historical references to support a cause or form a governing society, they must have the facts straight. This means using them in context, and for the original intended purpose. Not changing them or falsifying them to fit your ideas and beliefs.

Feminism in the Handmaid's Tale. (2017, Jan 24). Retrieved from http://studymoose.com/feminism-in-the-handmaids-tale-essay 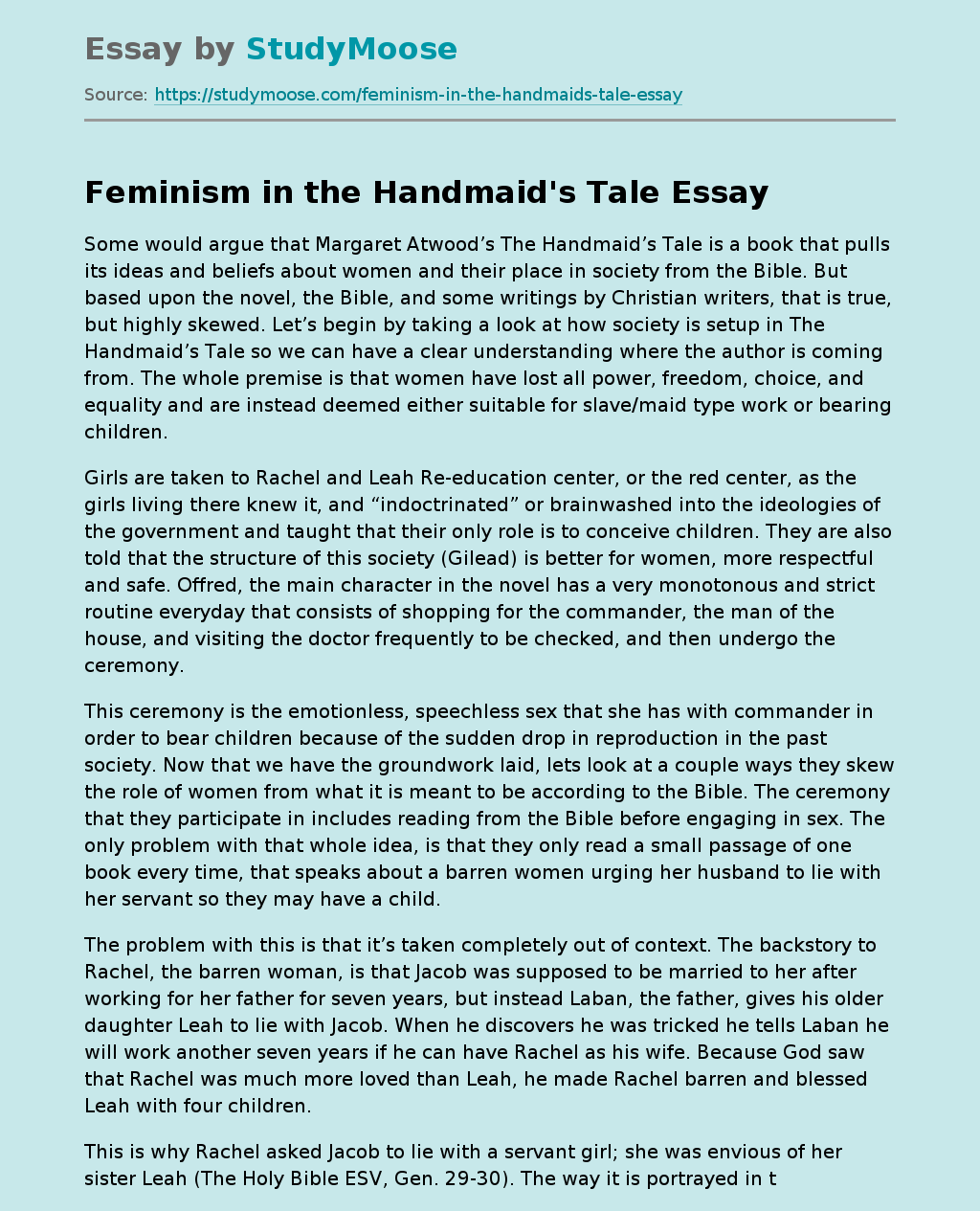