Feminism in a Patriarchal Society: How Ophelia and Cleopatra Broke the Norm

Shakespeare, it is claimed by many modern critics, was a feminist. James Shapiro, for example, goes so far as to claim that Shakespeare was “the noblest feminist of them all” in 1599: A Year in the Life William Shakespeare. While many of Shakespeare’s works contain countless female characters of all different standings in society, very few of these characters are strong-willed, well-rounded women. Often times forced into boxes by the overwhelming patriarchal system of society at the time, I argue Shakespeare is not necessarily a feminist, but someone who depicts women transcending the limitations of their time, and trying to, and often failing, to find their place and role in a world built against them.

Don't use plagiarized sources. Get your custom essay on
“ Feminism in a Patriarchal Society: How Ophelia and Cleopatra Broke the Norm ”
Get custom paper
NEW! smart matching with writer

In this essay I will explore chiefly Shakespeare’s treatment of two heroines; Ophelia and Cleopatra from Hamlet and Antony and Cleopatra.

I will begin with an exploration of Shakespeare’s representation of the effects of a patriarchal system upon the characters. Ophelia, as it may be, was wholly at the hands of the male figures in her life, especially her father and her older brother.

Hamlet, of course, was the other key-male-figure in her life and is one of the main causes of her untimely suicide. Ophelia is the victim figure in Hamlet due to the patriarchal ideals held by those men closest to her. Those to blame are in fact, those closest to her, yet, some blame can be placed on Hamlet’s mother, Queen Gertrude. After the rise of his uncle as King and the hasty marriage between his mother and said uncle, Hamlet is read as having lost trust, respect, and admiration for his mother.

One of Hamlet’s most famous lines, “frailty thy name is woman” is directed at his mother, laced with disdain.

He finds her untrustworthy and feels betrayed by her. His anger is later directed towards meek Ophelia and he turns cruel and cold to the girl he once professed love for. Ophelia becomes a ploy in his plan to avenge his father without giving her own well being and mental state a thought. As previously mentioned, Ophelia’s father and brother are also core figures in her life, yet, they too make Ophelia a victim to their patriarchal world. Being the doting daughter and sister she is, she blindly adheres to their demands to discontinue her relationship with Hamlet and deny his advances. Of course, the rejection from Ophelia is often seen as being part of Hamlet’s madness, yet as readers, we aware he is putting on an act – Ophelia is unaware of this and believes his actions to be her fault for rejecting him. She expresses remorse and sorrow in a speech: And I of ladies, most deject and wretched That sucked honey of his music vows … O woe is me. Ophelia is not the only one who buys Hamlet’s feigned act of madness, as Polonius later recounts a similar tale to King Claudius: But Yet I do believe The origin and commencement of this grief Sprung from neglected love Rather than being concerned about the precautions of forcing his hand in his daughter’s love affairs, Polonius is just thinking of the future and who he can marry his only daughter off to. He has no care for her own desires and is instead of using her as a ploy in a plan to make himself better off by marrying her off into a more respected family. Thus when Hamlet murders her father mistakingly in a fit of rage, Ophelia enters a double realm of guilt, believing herself to be to blame for both Hamlet’s madness, which is becoming more and more real, and her father’s untimely death. As a result, she becomes mad. Although at one level this decline into madness sets Ophelia up indisputably as a victim figure, on a deeper level perhaps her madness itself can be seen as Ophelia’s active rejection of patriarchal restraint.

Charney Maurice suggests in “Shakespeare on Love and Lust” that since within Renaissance drama madwomen were “more strongly defined than madmen,” and women’s madness was “interpreted as something specifically feminine,” through depictions of madness dramatists were able to give women a chance to express their selfhood – “make a forceful assertion of their being” – in a way which patriarchal conventions would otherwise have prevented. I will touch on female madness again; this is not the only time a woman’s madness can be seen as an act of defiance towards the patriarchy. Ophelia’s unyielding guilt is an unfair burden she should not have to carry. The tragic events that followed her during Hamlet were unwarranted. Ophelia is the victim of the dominant men in her life. She was left suffering, heavy with grief until her dying day, pushed to the edge with madness for having done nothing but acted as she was told to do, and adhered to those who meant the most to her; her father, he brother, and the man she loved. Polonius was the one who demanded she leave Hamlet, and Ophelia, the ever obedient daughter to her father, did as she was told because, in the society she lived, that was all she could do. Finally, madness overcomes and she makes the decision to kill herself. So, if madness is seen as the ultimate test of femininity, does this mean Ophelia’s final act was an act of resistance to the patriarchal mindset that drove her mad? Maurice might argue that is the case when looking at the characteristics of Ophelia, I believe her suicide was more of an escape than an act of rebellion. While I don’t see Ophelia’s madness as a form of powerful expression, I do believe other females written by Shakespeare use “madness,” or the actions that define madness, to garner the attention and respect from their peers of both lesser and higher standings.

In Antony and Cleopatra, Shakespeare again explores the idea of the victim within a patriarchal society. However, in this play the gender roles are inverted and it is Antony who is the true victim. Antony, the great Roman leader, is reduced to nothing but a ploy and boost in Cleopatra’s ruling over Egypt, similar as to how Hamlet used Ophelia as a device in his scheme against his uncle. Despite both women being in worlds ruled by a patriarchal society, surrounded by powerful men, Ophelia and Cleopatra live drastically different lives and all of this has to do with how they allowed men in their lives to treat them. There is no beating around the bush; Cleopatra is a sexual and sensual character. She is many times referred to as a” whore” or a “strumpet” by male generals and leaders throughout the play. Unlike Ophelia, Cleopatra is a complete powerhouse when it comes to claiming her own feminity and sexuality. That being said, Ophelia’s relationship with Hamlet at first was both unsupervised and secret, but Shakespeare does not explore their relationship prior to the start of the play any further than that, so it is impossible to assume what type of sexual relationship the two had. Through his treatment of Cleopatra, allowing her to express herself freely and speak for herself unlike Ophelia, Shakespeare provides us with what some scholars deem a “real” woman rather than a stereotypical, cookie-cutter character.

Velma Richmond claims in her essay located in “Shakespeare Without Boundaries: Essays in Honor of Dieter Mehl” that in Cleopatra, Shakespeare produced his “finest embracing of the feminine mystique.” Her sexual power over men is conveyed boldly, for example, in her descriptions of her former conquests ‘great Pompey’ and ‘Broad-fronted Caesar’. Cleopatra’s sexuality is not a thing to be locked up, as in Hamlet, but is celebrated as a positive force. Cleopatra, through the combination of sexual and political power, is a force of nature to be reckoned with. What is it about Cleopatra that makes her different from other female characters created by Shakespeare? What about her makes her more “feminine” when most of her actions go against the patriarchal desired feminine characteristics? American essayist and feminist Adrienne Rich has an answer that could possibly back the argument regarding Cleopatra’s feminity. In her essay “Compulsory Heterosexuality and Lesbian Experience,” Rich makes the claim that the act of being a woman who is driven by her own desires, whether it be sexual or otherwise, is in itself the biggest act of resistance against a patriarchal society and is the most feminist act a woman can perform. If this is the case, then Cleopatra, through her desires for Antony and her open flirtatiousness with Ceaser and other men, is using her sexual prowess as an act of feminism.

Cleopatra’s sexual deviance can be seen as “masculine” behavior, further straying from the societal norms put in place at the time. Cleopatra, Queen of Egypt, was never one to shy away from any discrepancies; especially war. Refusing to adhere to the stereotypes of patriarchal society, Cleopatra transforms her natural sexuality into part of her power, rather than as a diminishing of her goodness. Because of the raw power and determination she harbors, Cleopatra is unmoving in her decision to make a political move despite the wishes of the patriarchal men. When approached by Enobarbus in hopes to prevent her from entering the war, she becomes agitated and is forceful with her decision: A charge we bear i’th’war, And as the president of my kingdom will Appear there for a man. Speak not against it. I will not stay behind. Cleopatra thrusts herself into the men’s inner-circle and has a chair at their table, so to speak. This is a position of power which Ophelia is never able to obtain – and cannot of course, in the same way, for in her status as a middle-aged woman who is self-sustained as the Queen of Egypt, Cleopatra has the recourses and the ability to be more in control of her own freedom. In contrast to Cleopatra, Ophelia is completely financially dependent on her family.

Ophelia, the dominated daughter, is left to follow the beck-and-call of others. While there was a glimmer of her own desires at the begining of the play when she was seeing Hamlet without her family’s knowledge, it is quickly snubbed out by the demands of the men in her family. She is quickly convinced she misread her whole relationship with Hamlet and complies with their requests by simply stating “I will obey.” This unwavering obedience is shown here by Shakespeare to be the first step towards her own destruction and the fatality of trained, obedient women in a state run by greedy, selfish men. Obedience and silence were very much part of the patriarchal conception of femininity. A conception to which Cleopatra refuses to adhere. Cleopatra strays far from the quite and obedient type and makes herself heard whenever she so pleases. She challenges those around her to disagree and convince her that her ways are incorrect.

Feminism in a Patriarchal Society: How Ophelia and Cleopatra Broke the Norm. (2021, Feb 25). Retrieved from https://studymoose.com/feminism-in-a-patriarchal-society-how-ophelia-and-cleopatra-broke-the-norm-essay 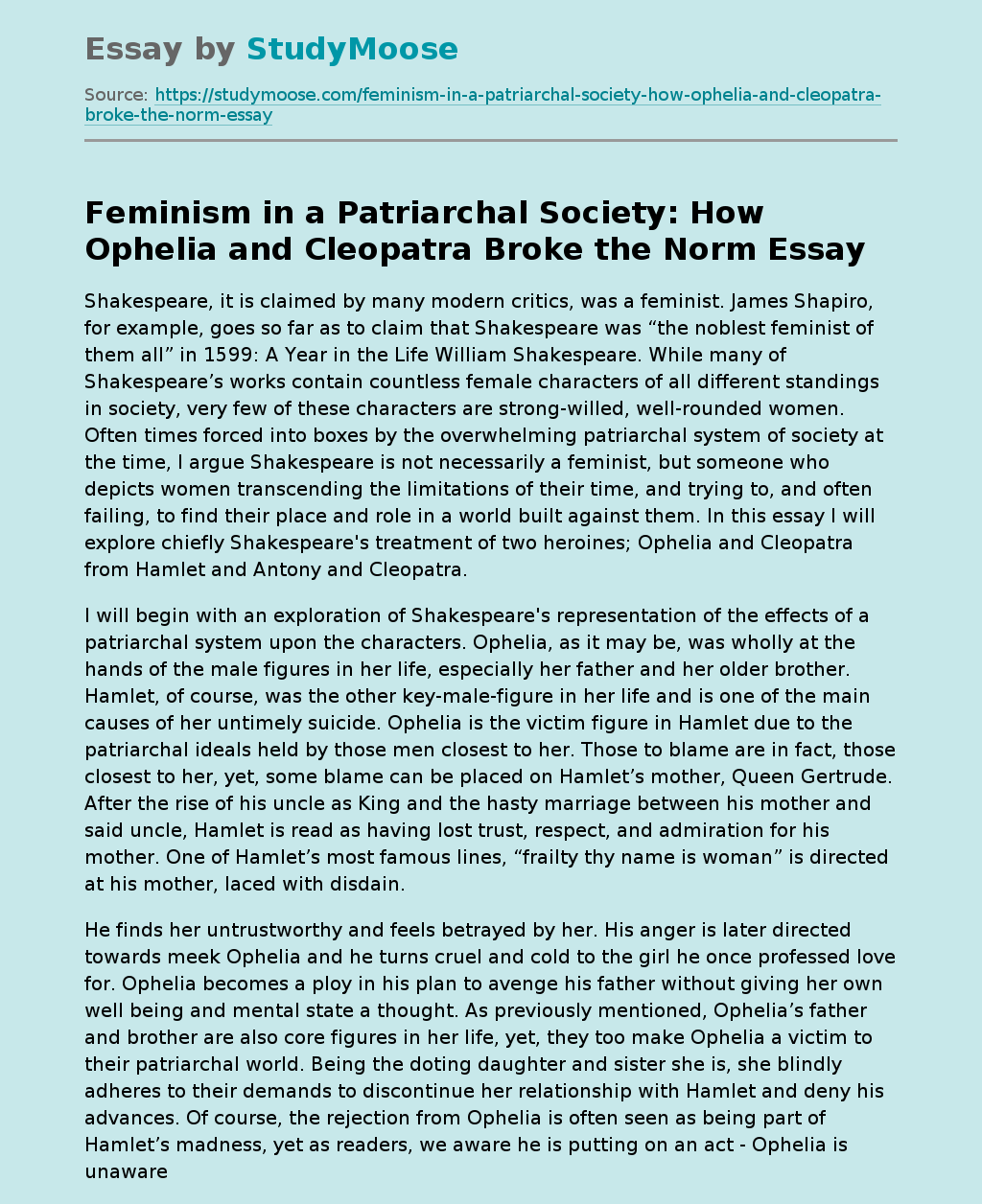